Kansas City, Mo. — When Bill Self needed a victory Saturday night at Sprint Center and decided the best way to get one would be shortening his bench in the second half, Kansas University’s basketball coach knew only one of the four big men sitting near him would get a crack at helping the Jayhawks rally.

“I decided to go with Carlton, and I’m glad I did, because I thought he played great,” Self said after he trusted his gut, and KU turned an 11-point halftime deficit into an 82-67 victory. “I thought he was really good the second half.” 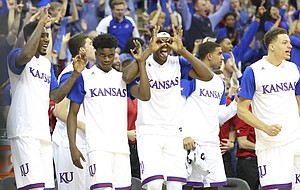 A 6-foot-9 forward from Cleveland, Bragg was the only player not named Perry Ellis, Hunter Mickelson, Wayne Selden Jr., Frank Mason III or Devonté Graham to see the floor until Self emptied the bench with No. 2 Kansas in total control late.

Bragg scored six of his eight points in the second half, pulled down three of his four rebounds in his eight second-half minutes, and during one span became a low-post point guard of sorts, dishing assists on three consecutive Kansas baskets.

With Kansas (8-1) up seven midway through the second half following a Bragg offensive rebound and put-back, the big man flashed his passing skills along with his trademark grin. 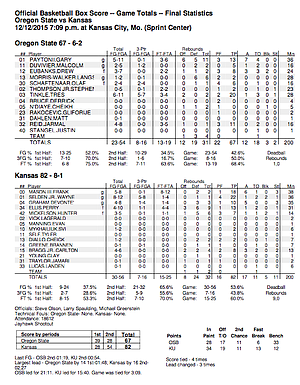 Bragg found Selden for a jumper, hit Graham for a three-pointer, then dished a pass to Mason for a layup.

His three assists marked a career high for the freshman, but the distribution didn’t surprise Selden.

“He’s a good passer,” the game’s leading scorer (22 points) said of Bragg. “He really looks for the open teammate. And him being able to knock down that mid-range shot really opens it up for him.”

However, Self had the Beavers’ offense in mind when picking Bragg as the lone substitute in his six-man, second-half rotation.

“To me he was the best guy,” Self said, “because if we were gonna switch ball screens and do things like that, he’s better than Cheick at getting out and guarding and doing some things.”

Bragg’s activity is his biggest strength right now, as he keeps getting acclimated to college basketball. When he’s not moving his feet better than most men his size can or crashing the offensive glass, he’s catching lobs and finishing slams.

As with most of KU’s bigs, Bragg’s minutes have ebbed and flowed this season as Self tries to figure out his rotation — something he’d like to achieve by the start of Big 12 play.

With three games remaining until the Jayhawks face Baylor on Jan. 2, the distribution of front-court minutes remains a we’ll-see-what-works-tonight kind of work in progress.

“Right now what I would hope to see is some separation between our bigs,” Self said, admitting he still doesn’t know who to put in the game sometimes when choosing between Mickelson, Bragg, Diallo, Landen Lucas and Jamari Traylor. “Because it’s hard to give everybody a chance when everybody’s about the same in practice.”

As well as Bragg and Mickelson (seven points, six rebounds, two blocks) played against Oregon State (6-2), it still seems Self hasn’t settled on anything or anybody when it comes to big-man minutes — except of course that Ellis will play as much as possible.

In the search to find the perfect compliment for Ellis, Bragg made his case in the second half. But that doesn’t mean Self will employ this shortened-bench strategy again.

“It’s a little frustrating to me,” KU’s coach said, “not knowing exactly what to do, because every situation seems like takes on a whole different personality.” 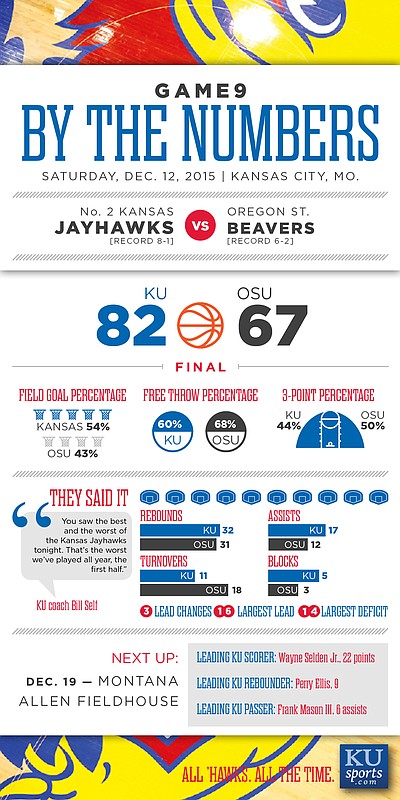 They are nothing more than bench players that can come in and provide a spark here and there. To me it is very simple you have two freshmen with just enough length and are very active on both ends of the floor not to mention both of whom are McDonald's all-americans and may or may not leave for the NBA. Get the most out of them because with Lucas and Hunter they have been here long enough to separate themselves as legitimate 2 way players and they havent

Hey Bill...maybe you need to call Poppa (Poppavich) for some advice.

Just start Bragg next to Ellis and be done with it

I've been hesitant to jump on the Hunter bandwagon, but he truly is starting to separate himself from Landon and Jamari. He's more disruptive on defense and has shown more of a knack to score the ball. He also passes the ball out of the post occasionally, which is something Landon never seems to do.

Still, for this team to reach its potential Diallo is going to have to find a way to get the majority of minutes at the 5.

Everyone wants the team to be packaged and predictable regarding who starts, who subs when, who gets minutes, AND hopes their favorite player(s) get in the games. The season is long and brutal, and if we are truly going to continue to play fast, then a lot of guys will get to play. Match ups will be a factor from game to game to some extent. Injuries of some shape or form are inevitable. While we love when Frank turns into The Tank, he takes a beating and sometimes you wonder if he is going to get up. With all of that said, if you think back to Korea, the team anchors, the big minutes, the comparatively short bench, the second half make up of tonight's game was reminiscent of last summer. Wayne seems to thrive when you just give him room and the green light and say "let him play."

BTW, what is the over/under line on how many times we'll see Frank smile this season?

Humpy, great comments. I think the O/U is 2.

Frank the Tank does worry me as the season goes on. We need him as fresh as possible late in the season, not as beat-up as possible. Not sure what you can do about it other than resting him, which is difficult to do during the conference season.

It's going to be very difficult for this team to win another B12 championship with this FT percentage.

Ellis plays better from the 3 spot.

Ellis cannot play the 3; he lacks the skill-set to play that position.

This is incredibly false. I would argue Perry is actually a better 3 than he is a 4. He has an above average handle for his size, he's fast, and he can shoot. Not sure what skills Perry is lacking to play the 3...

Perry is more valuable for KU at the 4, which is why he plays it almost exclusively. If Self plays him at the 3 that means less minutes for Selden, Graham, or Mason. If Perry gets a chance to play in the League it will be at the 3.

Perry releases his jumper like a high school girl. A real 3 would stuff it all the time. To the uninitiated, Perry looks quick because he's being guarded by slow players like UCLA's Parker. There's no way he could guard a legit 3 either.

I have a compromise. Perry should play like a 3 on offense (away from the basket), and like a 4 on defense (since he isn't quick enough to defend a guard). That way we can still have the three-headed monster of Frank the Tank, Graham the Man, and Selden...the...Superstar?

You lost me there, Jared. Who would play the 4 on offense? For this to work, Bill would have to play a 4 guard offense and abandon his Hi Lo. Not going to happen. I just don't see him being that flexible. But I like the idea.

Good job Jared. On 3 of 5 Tinkle shots in the first half Perry was, at least, a full step late. He was quick enough for Tinkle but not aware of where he was. Perry has value as a 4 on defense because of his rebounding. Again when his awareness is good as he let Payton II get around him twice when he, Perry, already had position.

Wayne has seized the moment and he even showed up on Payton II while on D.

The Trident is being wielded Poseidonesquely!!

Play Perry at the 3.... Where does this lunacy come from? He releases his jumper from hid chin like a high school girl. He gets open at the perimeter as a 4 because a) his jumper still isn't established enough to be respected b) he's being guarded by players with limited quickness c) KU puts so may other perimeter options out there.

Brannen Greene could shut Perry down at the 3 to say nothing of what a player with actual defensive skills or motivation would do...

Who would you take the minutes from? If there's anything that's proven in stone it's that Mason, Graham and Selden deserve 30+ minutes each.

Perry at the 3? Chicken Little absurdity at it's finest.

Jay, I think we can play him some at the three. Not as a go to but if it's a need. Then it becomes a two guard and three forward lineup. If a team plays small ball he can always move back to the four. I don't want to see him set anymore than necessary. Self wants more out of him and he can play on the offensive end outside or in the mid range and be crafty around the basket. Flexibility with a seven or eight man rotation makes it an alternative. When he is not aggressive on offense he is not as valuable and when he was not aggressive on defense yesterday it was the same. He is a senior and steps up many times but not always.

Well Mr. Flenory, "They are nothing more than bench players that can come in and provide a spark here and there.", I'm with you on this one and yes, I believe Diallo & Bragg are our best bigs in the roster. I'm sorry for being so critical to KU coaching staff. But I am a passionate KU fan. This is for the better KU team, through observation. It's not hard to see what's missing here. Look at https://en.wikipedia.org/wiki/Rakeem_Christmas - Look at how he progressed year after year. Part of it, coaching staff has a lot to do with players' development. The difference here is, our coaching staff recruits bigs to fit HCBS play style. No matter what, they'll have to stick with game plan. Other coaches? Either they have a very good skills development program or the players are forced to fit their styles requiring these bigs to be athletic and can shoot. I hope this will change soon.