New KU kicker: ‘I can do better’ 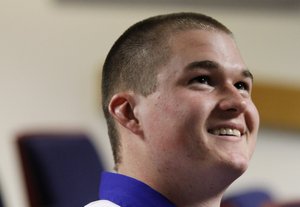 When Trevor Pardula was a sophomore in high school, he sat in the stands and watched his high school team struggle to kick the football.

Pardula, then a standout soccer player and now Kansas University’s top option as a punter and kickoff specialist, remembered thinking to himself, “I can do better than that.”

Not long after the thought first began bouncing around his brain, Pardula and his high school coach had a meeting of the minds.

“He didn’t actually ask me,” Pardula recalled. “I was actually planning on playing. But during the football games the year before, I was watching everyone kick, and I was like, ‘I could go down there right now and do better than this.’ So, it was just like, ‘Why not?’”

Because he spent last season booming punts and thumping touchbacks, Pardula did not see many KU games. Had he been able to watch the Jayhawks’ kicking game in 2012, Pardula may have encountered a feeling of déjà vu, with his mind racing back to those thoughts he had as a sophomore in high school.

As it stands, the lone kicker added to the team via scholarship this offseason is getting a great opportunity to showcase his skills this spring.

“It’s been fun so far,” Pardula said this spring. “I’m kicking the ball well. Obviously, I can get a lot more consistent. Consistently is like the most important thing for a kicker.”

Consistency may be the key for the players, but cannon fire goes a long way with the coaches. During one spring practice, with the wind slamming into his face out of the south, Pardula got hold of one and watched it slice through the air like an arrow through water. Positioned behind him for the big bomb was KU coach Charlie Weis, who let out a spontaneous yell of “Wooo hoo hoo hooo” as the ball soared through the air.

“Obviously, that’s a good feeling,” the junior-college transfer from De Anza College said with a smile. “You want to make him happy. You want to make everyone happy, and when you get a reaction like, that it feels good.”

It’s not every year that scholarships are awarded to kickers. But Pardula earned one this year because the Jayhawks needed an instant upgrade in the kicking game. The San Jose, Calif., native said the coaching staff talked to him about handling all three duties — punt, kickoff and field goals — but emphasized that he was needed most on the punt and kickoff teams. Pardula said he would be open to handling all three duties and that he was focused on competing for all three spots.

With 100+ rosters these days, it's difficult for one player to make a huge impact. However . . . whoever placekicks and kicks off could have a significant role in improving the record of this year's team. Big Need. Huge opportunity for improvement.

Still concerned about not having a special teams coach.

I'll be plain about it, ahp: no you couldn't.

I agree. Texas, Texas Tech, Northern Illinois, Rice, and maybe TCU (that might be stretching it) would have resulted in wins with a decent kicking game and at least an average passing game.

Texas is becoming like Nebraska to us. In the history of the Big XII, we've never beaten them. Everybody else in the league has, even ISU, but not us. Like NU all those years (decades), the whole idea of beating UT is becoming "the impossible dream."

Yeah, I know...but it was a long time coming, and Nebraska was uncharacteristically bad that year (5-7). Maybe someday we'll do that to Texas when they're down. It's just that the Big XII is starting its 19th year, and we haven't beaten them yet. Frustrating. I guess we'll get them someday.

I think the biggest impact will be for our defense, I got sick last year of our inability to get a touch back and watching returns go out to the 40

In my mind Coach would have done a Fred Flinstone-esk "Yabbba dabba dooooo!"

Let's hope he's good at extra points because we're going to score a ;lot of TDs this coming season!!

All kidding aside, a strong kicking game can give an undermanned team a fighting chance with field position [touchbacks stretch the opponents offensive distance], coffin corners [pin them back and limit their offensive choices], turnovers [tight coverage] and scoring [consistently hitting the "makeable' field goals, 30 to 45 yarders].

The headline implies he is currently not doing well which gave me a quick pause before I read further!!

LJW, I think the headline is supposed to inform, not scare the crap out of the reader!!

Oakville, Funny you took it that way. Given last year's kicking performances, I immediately took it the way that the LJW obviously intended. Your comment made me laugh though! I'm sure you are not alone regarding the interpretation.

Well they also can't figure out that the proper name for our beloved university is The University of Kansas, and not Kansas University.

Man, I hope we finally have someone who can kick it through the end zone on every freaking kickoff and take the Tavon Austins and Tyler Lockets out of the game. Also hope he booms his punts w/o out-kicking the coverage. Am looking forward to seeing another piece of the puzzle in place.

Wow- that's a relief. I was sure that this was going to be some sort of awkward piece about one KU kicker disrespecting another KU kicker.

Exactly what I thought when I saw the article.

As wretched as many of the things were last year, I have no problem saying on more than one occasion watching games I thought to myself "damn, we cant even kick the ball well" -- I assure you all I never had any delusions of being able to do it better than the guy out there. In my mind there were games we lost simply because of not being able to do that.

There were plenty of other issues obviously. But it's easy to see kicking not doing well or doing well. Hopefully this is progress.

If Trevor Pardula can be even close to what KU Football fans got from Dan Eichloff, I know I'll be happy.