Kansas recruit Nino Jackson of the Compton Magic hangs for a shot during Saturday's game against Team Swish in the Jayhawk Invitational at Lawrence High. 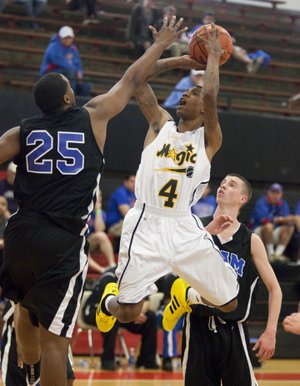 Kansas recruit Nino Jackson of the Compton Magic hangs for a shot during Saturday's game against Team Swish in the Jayhawk Invitational at Lawrence High.

How’d that marriage come about?

“They saw me playing a little bit last year and asked me to come play with them,” added Jackson, Rivals.com’s No. 38-ranked player in the Class of 2012.

“It’s hard to practice now because school is still in (session), but after that, I’ll play with them more.”

Jackson, who on Saturday listed KU, Baylor, Oklahoma and UNLV as his list of schools (he recently mentioned Texas and North Carolina as well), showed perfect shooting form Saturday in drilling a pair of three-pointers.

What stood out most, however, was his athleticism and ability to race up and down the floor.

“Yes,” he said, asked if he’s always the fastest guy on the court. “You’ve got to step it up, speed up more than anybody else to get it done.”

Jackson showed a lot of personality Saturday, smiling a lot and talking a lot.

“I’m just a cool kid. I like to play basketball, like to have a good time on the court,” said Jackson, who sat out most of the second half because of the lopsided score.

“Talking to the refs makes the game more easy and more fun. I like to help everybody have a good time. If you have fun when you are playing, your game will come right to you.”

Where does KU stand?

Lacey not in town: Trevor Lacey, a 6-3 senior from Butler High in Huntsville, Ala., did not make his official recruiting trip to KU this weekend. His home state was devastated by tornadoes earlier this week. Lacey, who is down to KU, Kentucky, Alabama and Auburn, has yet to reschedule his visit.

Murray to West Virginia: Former La Salle center Aaric Murray reported on Twitter on Saturday that he’s transferring to West Virginia. Murray at one time had KU on his list of schools.

Anderson flap: Braeden Anderson, a 6-10 high school senior forward from Canada who recently signed to play at KU, has been mentioned in an ESPN.com article regarding his relationship with former Louisville and Robert Morris College player Brandon Bender.

Bender reportedly was asked to leave the players’ hotel at the recent Derby Classic in Louisville because of his reputed ties to an agent.

“I’m here to see that kid,” Bender told ESPN at the Derby Classic. He was referring to Anderson, whom he coached last summer at an AAU tourney in Las Vegas.

Anderson, who is not ranked in Rivals.com’s top 150, said Bender in no way influenced his decision to attend KU.

“If I (listened to Bender), I wouldn’t be going to Kansas,” Anderson told ESPN. “I don’t know him real well. I talked to him maybe a few times, maybe sent him a message on Facebook a few times. He stopped by (team hotel), said he had mail for me from other schools. I chucked it. I’m going to Kansas.”

It is not against NCAA rules for prospects to speak to individuals with ties to agents (sometimes known as “runners”) as long as they do not accept improper benefits. ESPN did not allege Anderson accepted benefits, but quoted anonymous sources as saying Anderson stayed in Louisville a couple weeks this school year with former Louisville football player Rodney Carter.

Anderson acknowledged to ESPN that Carter is “a good friend.” While in Louisville, allegedly staying with Carter, Anderson took an unofficial visit to Kentucky.

Bender — he’s been tied to various college prospects according to ESPN — said he hasn’t broken any NCAA rules.

“I haven’t done anything wrong,” Bender told ESPN. “If a kid calls me and says, ‘Brandon, help me find a school,’ I'll do it. I’m trying to do the right thing. I don’t want any distractions. I just want to get into college coaching.”

Im liking Braeden Anderson after reading above. Nino Jackson could be a good midwestern recruit for Self...

+1 ralster, I wish they would get this trash out of college basketball. Speaking of the so called runners that say they are interested in coaching. Leave these kids alone. Anderson does not want anything to do with you. El Nino Jackson sounds like a good nickname!!!!

Nino is a Kansas fan and has been for a long time. Pretty sure he will be coming to Kansas. Oklahoma has got to be out of the running unless he wants to spend his college life hoping to get into the NIT every year. He knows deep down that if passes on Kansas, he will likely regret his decision.

Oklahoma will find itself back in the big dance once again now that Lon Kruger is taking over. It may not be this year but soon, no pun intended. He is a good coach. That said I hope Nino becomes a Jayhawk. My worry is that Kruger is also a good recruiter.

I really hope all of Laceys family and friends are doing okay! Hope he gets everything back to normal in Alabama basketball can wait the jayhawk family prayers are with u hope to see u in a jayhawk uniform soon tho :) Rock chalk

We clearly understand thetragic circumstances around the cancellation of Lacey's visit, but I surely hope that before this most important decision is made, this young man has a chance to visit KU where he we be able to see first hand, good team mates, a great coaching staff, first class facilities, and a great University in a fantastic town-Lawrence! He won't regret it and it will enable him to make a more objective decision.

Really wish Lacey could have made it to campus but you can't fault him in any way. hope all is well for him and his family down there.

If, when he's at KU, Shabazz M. drops half the knowledge that this fella's dropped in his day, I will call him The Disciple.

We need early commits from Nino and Perry. Waiting it out until the spring is proving to be risky for KU.

Am I missing something, or did Anderson grow a couple inches in the last couple weeks?

Nino, it's not good for a highly rated basketball recruit to talk ambiguously about "connections." Thanks.

Actually, there are fewer tornadoes per square mile in Kansas than many many other states, but they do not have a classic movie, a basic icon in movie history as Kansas does. My favorite line from the movie has always been "What a world! What a world!" As the witch dies, she complains about the terrible conditions of the world, as if the did anything to improve it. One could only imagine Sampson bitterly complaining about the terrible state of college recruiting as he is banished from coaching college ball every again. "What a world! What a world!"