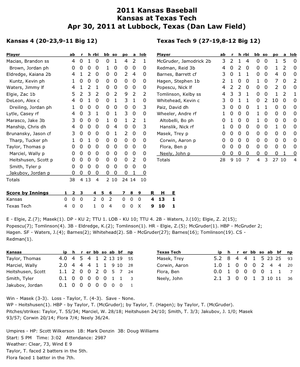 Lubbock, Texas — Jamodrick McGruder’s grand slam in the bottom of the sixth sparked Texas Tech to a 9-4 Big 12 Conference baseball victory over Kansas University on Saturday.

Kansas junior Zac Elgie went 3-for-5 with a two-run homer and two doubles as the Jayhawks outhit the Red Raiders, 13-10.

Trailing 5-2 in the sixth, KU cut the lead to one on a sacrifice fly by Jimmy Waters and an RBI single by Lytle, following Elgie’s third hit of the day.

However, that was as close as the Jayhawks came. After relief pitcher Wally Marciel loaded the bases with a double, bunt single and a walk, McGruder delivered the deciding blow with a shot into the Kansas bullpen.

The series finale will be at 1 p.m. today.

this is not should be happening in this series... the Red Raiders are owning us in their ballpark...and we've been better than them the whole league season.

we have to salvage a win today.....or as i feared at the beginning of the year, a disaster could happen.

You are right. Need a W today or we are really in danger of falling out of the Big 12 tourney chase. We still have a very tough series coming up at Oklahoma. Let's get one in Lubbock, fellas. Need a young pitcher to step up today and shut them down.