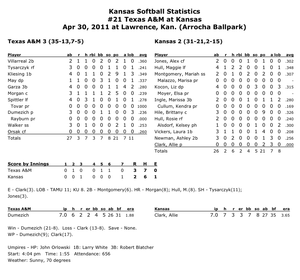 Kansas University’s softball players always manage to come off the field with smiles on their faces.

Even during a tough Big 12 schedule and seemingly crushing losses — like Saturday’s 3-2 setback to No. 22 Texas A&M at Arrocha Ballpark — the Jayhawks are focused on moving forward.

“It could have been amazing, but it was still a great game,” KU senior pitcher Allie Clark said.

Clark was referring to a near-comeback win by the Jayhawks, who trailed 3-1 heading into the bottom of the seventh inning.

Laura Vickers and Ashley Newman opened the frame with back-to-back singles and were moved over by a sacrifice bunt from Alex Jones to set the table for Maggie Hull.

Hull — who blasted a third-inning homer off the scoreboard in left-center field to tie the game 1-1 — blooped a single to right, scoring Vickers and pulling KU within one run with the middle of the order up.

But Mariah Montgomery popped the first pitch up to first, and Kocon was called out on strikes to end the game and KU’s potential rally.

“All we ask is to get our best hitters up in pressure situations, and we had them up,” coach Megan Smith said. “Maggie came through, (Montgomery and Kocon) didn’t. But they will tomorrow.

“We put ourselves in position to win the game, and against a tough team like (Texas) A&M, that’s what we wanted.”

Sure enough, the Jayhawks weren’t down on themselves after the hard-fought contest. Instead, KU stayed on the field and celebrated Senior Day for Clark and Brittany Hile.

Clark tossed one of her best games of the season, throwing a complete game with a season-high eight strikeouts.

She did surrender seven hits and walked seven, but mostly worked out of further damage, aside from giving up two-out RBI singles in the fifth and sixth.

“(She was) phenomenal,” Smith said. “She was in control. She was going right at the hitters. She was smart.”

Clark admitted to being fired up for Senior Day, though she said she tried her best to put it out of her mind.

When the Jayhawks threatened to tie in the seventh, Clark said she was about ready to charge the field and celebrate a win.

KU and A&M will finish the two-game series at noon today.