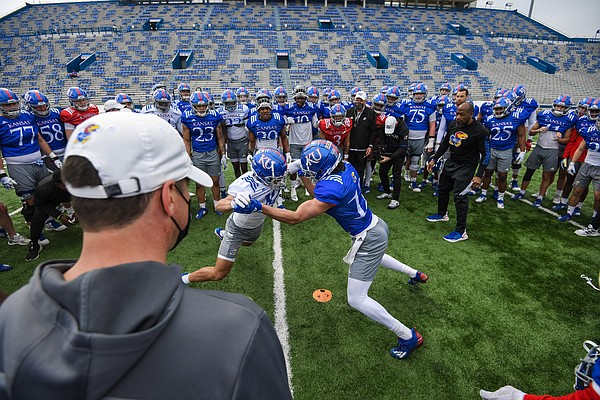 Members of the Kansas football team circle up to watch teammates battle through a drill during a spring practice at David Booth Kansas Memorial Stadium, in April of 2021.

After what will go down as a thorough search for its new football coach, the University of Kansas has its man in Lance Leipold.

And just because Leipold is not the name that a large and loud chunk of the current KU roster backed throughout the search does not spell doom for Kansas football.

There’s little doubt that several of the Jayhawks who just went through spring ball with interim coach Emmett Jones wanted to see what Jones could do with the position on a full-time basis.

But just because first-year KU Athletic Director Travis Goff did not elect to go with their guy does not mean that the roster will fall apart in front of our eyes.

A few guys will leave. There’s no question about that. It happens every time there’s turnover in the head coach’s office at 99% of the schools in America. And it will happen here in the weeks and months ahead.

But the majority of the roster will remain intact. And the reasons for this are many.

• Some players simply do not have anywhere else to go — at least not if they want to continue to play major college football in a Power 5 conference. Remember, in order for someone to leave, some other place has to want them. And while the Kansas roster has been upgraded with talented players that many schools would surely scoop up, not every school has scholarships available this late in the game. In fact, most don’t. So for many of these guys it likely will boil down to staying at KU or transferring to a lower level. With so many players in the transfer portal and looking for new homes, there’s something to be said for staying put with your friends and teammates at a place that provides the opportunities and facilities that Kansas does.

• The KU football rebuild under Leipold will be a long, hard climb, but there’s no doubt that it’s one that several Jayhawks still want to attempt. Many of these guys already have put a lot of heart into trying to get this thing going again and likely will not want to quit now. Sticking it out isn’t for everybody, but there’s a real sense of ownership and camaraderie among the guys who are here.

• We have no idea yet how Leipold is going to sell himself or his vision to the 100-plus Jayhawks on the current roster. But isn’t it possible that a lot of them are going to like what they hear? New energy and the promise of a fresh start might be all that’s needed for the current players to get fired up again. After all, with every new start comes a new opportunity and Leipold seems like a fair coach in that regard who likes to reward hard work.

• Finally, the identity of KU’s head coach is a big deal to a lot of people. But most of these guys just want to play football. As long as a position coach or two and their teammates stick around, that may be enough to entice several Jayhawks to stick around, too. And you might be surprised by the fact that some of the players who were most vocal with their support of Jones could be the first ones in Leipold’s office, telling him how excited they are to play for him. That’s just the way these things tend to go and the gesture does not necessarily say anything about Jones or Leipold. It says everything about the resilience of the kids.

I don’t doubt that the Jayhawks who threw their support behind Jones truly believed in him and wanted to play for him as the head coach at Kansas.

I don’t blame them either. Every conversation I’ve ever had with Jones left me impressed and wanting to hear more. He’s a terrific leader and the man knows his football, too.

But it’s not as if he didn’t get a real shot here. He interviewed. Goff and company listened to his vision for the program and carefully considered all of the unique input he had to offer.

For a wide receivers coach and passing game coordinator who likely would not have gotten an interview at any other Power 5 school at this point in his career, that’s not nothing.

And hopefully KU will do right by Jones with some kind of meaningful thank-you gesture for the work he did to hold the program together amid turmoil this spring. Retaining him would be a great start. Throwing in a pay raise or hefty bonus would be even better.

And the guess here is that, as long as Jones wants to stick around Lawrence, KU will be happy to have him.

That should help soften the blow of the hire going in a different direction than many current players wanted and could be the biggest factor in KU keeping this roster together heading into the 2021 season.

So much of this will depend on how Coach Leipold handles the communications, and the one exception I see in your comments illustrates this - new energy.

It would seem to me that they also have a common message of continuing to work hard to develop themselves into better players and people. There will undoubtedly be things that are different but hopefully they can build on the good for continuity.

But I agree that a lot will depend on how Leipold presents his vision. I don't think he'll over-promise or blow any smoke. I think he'll tell them they're going to work hard, play a disciplined style and have some fun along the way.

Matt, well written. Why would a kid run from a successful coach?

The Minginites out there should be thrilled with “grinder” attitude and approach.

For each Kansas Jayhawk that decides to Transfer Out, A Buffalo Bull could decide to Transfer In. Just a consideration based on the July 1 transfer portal deadline.