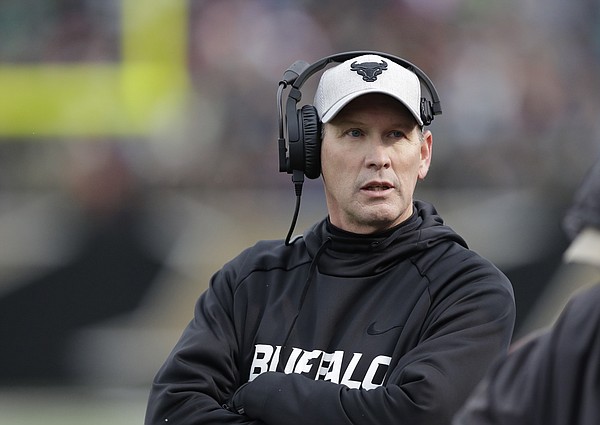 Newly hired University of Kansas football coach Lance Leipold is shown in this Nov. 19, 2016, file photo, during a Buffalo game against Western Michigan, in Kalamazoo, Mich. by Carlos Osorio/AP Photo

It did not take long for first-year/first-month University of Kansas Athletic Director Travis Goff to identify Lance Leipold as the right hire for the KU football job, proof positive that Goff was talking to the right people during the recent search to replace Les Miles.

From the minute Miles left town, Leipold’s name was the one I heard most often from multiple people who are deeply invested in the success and history of Kansas football.

Their passion for the program and burning desire to see it get back on the right track led them to Leipold, a no-frills kind of coach who believes in three things — hard work, humility and winning football games.

The first two will be easy for him to emphasize here and figure to be cornerstones of the rebuilding project. The third will take time. But unlike the other recent KU football hires, which all seemed to have some sort of gimmicky angle attached to them, this one is just about football.

Leipold is not a big name. He does not carry a Hollywood persona. He’s not known as a hot-shot recruiter. He’s not the up-and-coming next big thing. He’s just a football coach. A grinder. And he has proven at his past two stops that his way of coaching delivers results that people like to see.

Maybe hiring a guy from the same program that sent KU the coach who started the Jayhawks’ skid more than a decade ago will exorcise the demons that have haunted this program since 2010.

While we’re on that topic, don’t think for a second that just because they both coached at Buffalo Leipold and Turner Gill are similar in style or substance. Truth be told, the two aren’t even in the same stratosphere when it comes to their track record as football coaches.

But while Leipold’s list of accomplishments is impressive — both at Buffalo and at his previous stop at Division III Wisconsin-Whitewater (his alma mater), where he won six national championships in eight seasons — it’s how he went about achieving his success that makes him best suited to take over at Kansas.

Remember, this is an evaluation and development job. No matter who the head coach is, KU is not going to out-recruit the programs it competes against. So the coaching staff needs to find those diamonds in the rough, get them on campus and then get the best of out of them.

Sometimes that means getting lucky on a prospect that others overlooked. Other times it means turning a quarterback or tight end into an all-conference offensive lineman.

But that stuff doesn’t happen by chance. It takes a keen eye to identify the potential and then a demanding and disciplined philosophy to make it work. Leipold has both.

That was a big part of how both Glen Mason and Mark Mangino did it, and those are the only two KU coaches in the past five decades who enjoyed any kind of real and sustained success during their time in Lawrence.

If you look at Leipold’s recent recruiting at Buffalo, it looks a lot like Mangino’s at KU. The Bulls’ recent classes were full of underrated prospects that very few other programs wanted who Buffalo took a chance on and turned into all-conference type players.

Going back to his time at Whitewater, where development of overlooked players is what it’s always about, Leipold won 109 of 115 games in eight seasons and became the fastest coach to reach 100 victories in NCAA history, all with kids known as football players who put their faith in Leipold to lead them and did not care about seeing their names on SportsCenter or their coach on commercials. Their coach didn’t either.

Leipold will have more and better resources at KU than he ever could imagine. And the fact that his coaching career — and the success that came with it — is rooted in doing more with less should be a good fit for Kansas right off the bat.

Let’s face it; KU in its current state is a Power 5 football program by association only.

Winning will be harder to do here than at any other place Leipold has ever coached football. But the fact that that did not scare him off is the first good sign.

The second is the fact that after a successful turnaround at Buffalo, Leipold is ready and willing to do it all over again at Kansas. It takes a special personality to enjoy operating in that space.

At a time when Kansas football desperately needed to press the reset button and start over with a coach who is comfortable in the grind, who celebrates small victories instead of promising championships and talking about building a dynasty, Goff went out and hired a man who is known just for that.

Now the fun begins and Leipold gets the opportunity to show whether his approach can work at the Power 5 level.

It will be a while before we know the answer to that question. But there’s little doubt that Leipold’s path has prepared him for the challenge and his past successes make him a hard man to bet against.

Without comparing track record or coaching skills/potential, the difference I see for Leipold at Kansas compared to Gill, Weis, Beaty and Miles is Leipold will start with a solid foundation of players. Inexperienced, for the most part, but a solid foundation on which to continue the rebuild. Thus I am hopeful that we are off and running.

A key factor is keeping Emmet Jones in place, maybe putting him in position to learn the head coaching job. Another key might be not making wholesale changes on either offense of defense until after this coming season.

I was hoping for Emmett Jones to get the opportunity to show what he can do, but, nevertheless, I applaud this hire. Leipold was my personal choice if it wasn't going to be Jones.

Gill had a solid foundation thanks to Mangino, but that crumbled during his tenure.

The quote about his willingness to take on another rebuild is very important. It says tons about his fire, his confidence and his goals as a coach.

We need an offense that fits his style and our personnel. Nothing else. The players just went through a new offensive install, so they aren’t even running what they did last season.

The only connection to the past should be the players who are here and any coach/staff that he sees fit to keep. We were 0-9 last year. Let’s not obsess about keeping continuity.

The only continuity I'm concerned about is 1) not changing the recently installed offense and 2) making it easier on the kids by not changing the assistants to any serious degree until after the coming season.

Totally changing the offense or even changing it to a significant degree puts us in the same spot as last season when we tried to install a new offense without benefit of spring practices.

Going to be fun to watch a guy who is 100% substance over style come into a place that has been 100% style over substance for 10 years. It will be interesting to see how the marketing group handles this. I would guess Leipold will have some concerns about how that is run and I hope he is given the authority to call a lot of those shots. Will the hype machine be willing to tone it back a bit and let him set the tone he needs to set? Even if in year 2 they see season ticket sales wane a little? Will we see all the uniform variations game to game, etc? I’m guessing he’s the kind of guy that thinks that kind of stuff is a distraction. Should be fun. Hope he’s ready to fight all the fights he’s going to need to.

Amen to ditching all the stupid uniform changes.

Michael - There was an interesting video linked yesterday of the Whitewater program when they only had 5 NCs. They asked him how many shoulder rides he had over the years. None. The players commented that they knew it wouldn’t fit his humility and focus on the players and program. Quite a contrast to what IMO was the beginning of the the slide of the program; the OB trophy presentation (The players being scolded for the attempted Gatorade shower was the precursor.) The game plan the coaches put together was lauded over the performance of the players.

The other thing that is encouraging is reading how his O in particular has adapted to the players in a given year. This sounds very similar to what the players have commented about the new O that was installed this spring. The spring is too important to waste regardless of whether the package has been played in a game or not.