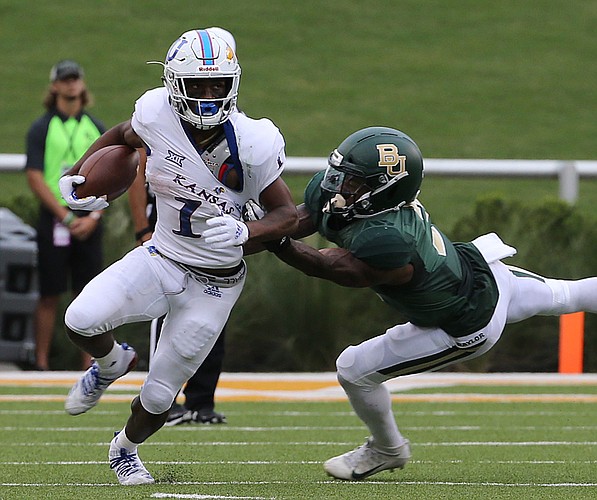 Kansas running back Pooka Williams Jr. (1) breaks the tackle of Baylor safety Chris Miller (3) during the first half of an NCAA college football game, Saturday, Sept. 22, 2018, in Waco, Texas.

As the Kansas football team puts its bye week in the past and moves into game week for its Big 12 opener at Baylor, one question looms large: Will there even be a game this Saturday?

KU is in fact scheduled to face Baylor at 6:30 p.m. at McLane Stadium in Waco, Texas, in what will be the Bears’ third attempt at a season opener in 2020.

But the program’s own issues with the COVID-19 virus cost them last week’s game with Houston, which was scheduled just six days prior, and came after the postponement of Baylor’s original season opener against Louisiana Tech on Sept. 12 that was called off because of a rise in COVID-19 cases within the La. Tech program.

Baylor’s positive COVID-19 results hit a particular, undisclosed position hard and undercut the Bears’ ability to hit the Big 12’s minimum threshold for either offensive linemen (7), interior defensive linemen (4) or quarterback (1), which were announced by the conference before the start of the season.

So here the Bears sit, still waiting to play their first game under first-year head coach Dave Aranda, and they’ll enter the week unsure of whether this will be the week it happens.

Speaking with SicEm365 Radio last Friday, Baylor Athletic Director Mack Rhoades made it clear what the Bears were facing.

“Within this particular position group, we can’t take on any more water,” Rhoades said. “We’ll get some young men back before the Kansas game. Not a week before, not five days before, but shortly before that could be ready. So we’re hopeful.”

As of Friday, Rhoades told SicEm365 that he had not yet had a conversation with KU AD Jeff Long but added that he planned to do that, perhaps over the weekend.

Regardless of what’s discussed when the two talk or talked — and most likely it was a non-update from Rhoades and preliminary discussions about potential contingency plans — the bottom line is that this will be a numbers game and likely will linger throughout the week.

If the Bears have enough players, including walk-ons, to suit up following Friday’s round of testing, the game will be played. If they don’t, it likely won’t and Baylor will move into October still hoping to play its first game of the 2020 season.

With that said, Rhoades said on Friday that he had thought Saturday’s game could be played.

“We’re optimistic that we’ll be able to play the game,” he said.

Rhoades noted the team’s issues were “a combination” of both positive test results and contact tracing issues and that Baylor was following CDC and local health guidelines for how to handle the situation.

“It’s what all of us within the Big 12 are faced with,” he said. “That’s just something that we’re going to have to continue to deal with as we move forward. … Somehow, some way we’ll come out of this better than we were before.”

The initial odds released in Las Vegas on Sunday pegged the Bears as 18.5-point favorites over the Jayhawks.

A couple of thoughts:

To add a little more uncertainty to the situation...

According to Benton Smith "a Big 12 team has the option of playing anyway, even if it doesn’t meet the thresholds of 53 players, seven O-linemen, four D-linemen and one quarterback."

The game is devolving - why not play eight-man football?

The p*ssification of America will lead to football being extinct at every level in my lifetime.

With the caveat that I do support overall caution if a team has a number of cases. To break things down by positions seems a bit odd though. I'm pretty sure the Mississippi Juco on Last- Chance U had to play while being way short on linemen. Just saying.