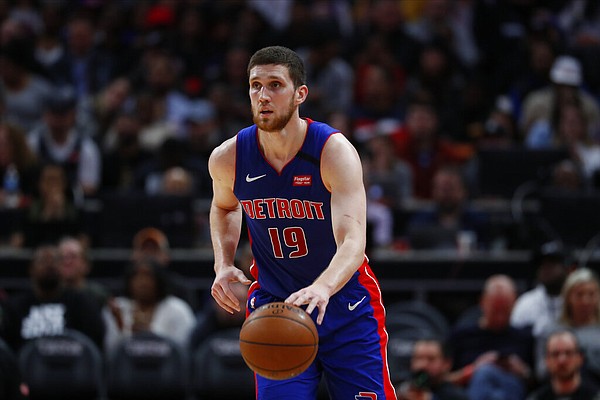 Detroit Pistons guard Sviatoslav Mykhailiuk plays against the Brooklyn Nets in the second half of an NBA basketball game in Detroit, Saturday, Jan. 25, 2020. (AP Photo/Paul Sancya) by Matt Tait

League officials last Thursday announced the approval of the NBA’s plan to restart play in early July, leaving 22 teams still alive in the 2020 title chase. While we wait for July to arrive, it seemed like a good idea to spend some of this idle time looking back at the season that was for the former Kansas Jayhawks in the NBA.

Next up: Svi Mykhailiuk, Detroit Pistons.

With just 22 teams advancing to Orlando for the restart of the 2019-20 NBA season, Svi Mykhailiuk’s second NBA season is officially over.

But the gunner from Ukraine, who turned 23 on Wednesday, made the most of his first full season in Detroit.

After starting his career with the Los Angeles Lakers, who drafted him 47th overall in the 2018 NBA draft, Mykhailiuk was moved to Detroit when L.A. was making its run at Anthony Davis and needed to clear as much cap room as possible to land him.

While that put a dent in Mykhailiuk’s hopes of winning an NBA title early in his career, it also opened up more of an opportunity to play.

Those numbers doubled in Detroit, where Mykhailiuk started 27 games this season and averaged 22.6 minutes in 56 of the Pistons’ 66 games. By January, he was a full-time starter.

The extended playing time pushed his points-per-game average up to 9. But, more importantly, it allowed him to get more comfortable from behind the arc and his 3-point percentage jumped to 40.9% during the 2019-20 season.

That mark came on an average of 5.1 3-point attempts per game and put him among the NBA’s Top 25 3-point shooters, ranking 22nd with a still-somewhat-limited sample size.

That single stat is enormous for Mykhailiuk’s future in the NBA. If he can continue to be a reliably dangerous shooter from distance, there will always be a team that’s looking for his services.

The Pistons might very well be that team long term.

In one entry of their recent “Reasons for Hope” series, the Detroit Free Press highlighted Mykhailiuk’s sharp shooting as a potential cornerstone of Detroit’s current rebuild.

The Free Press also hinted at Detroit head coach Dwane Casey being at least a little bit intrigued by Mykhailiuk’s potential as a part-time point guard while filling his role as a shooter the rest of the time.

“Mykhailiuk knows his strengths,” Free Press writer Omari Sankofa II said in the series. “He took 405 shots from the field, and 285 of those — 70.4% — were 3-pointers, one of the highest percentages in the league. He hit 39.5% of his non-corner 3s, 36.4% on 3s from the right corner and 46.7% on 3s from the left corner. Defenses always have to account for him, making him an important weapon in Casey’s offense.”

Svi made four or more triples in 17 games this season, including hitting five twice, in back-to-back games, in mid-January. What's more, he played in just eight games during which he failed to make at least one 3-pointer.

If he continues to progress at the rate he did this season, Mykhailiuk is a potential bargain for a Pistons team looking to attract free agent talent to aid its resurgence.

The Free Press called Mykhailiuk “a strong runner up” for Detroit’s 2019-20 Most Improved Player award — just like his buddy, Devonte’ Graham on the league stage — and quoted Casey singing Svi’s praises.

“He is on track to be one of our core pieces as far as his shooting ability and his ability to make plays off the dribble,” Casey told the Free Press in late January.

Like Graham did with Charlotte's G League affiliate (Greensboro) a year ago, Svi found his footing during his own G League stints, in Grand Rapids, where he made plays and proved he could be counted of for a bigger role.

That eventually carried over to Detroit and he figures to head into the offseason and the 2020-21 season with the kind of confidence that can deliver a breakout season in Year 3.

and of course, he's lookin good in red and blue. Next year may be the true breakout ala Devonte' this year for him. Initially disappointed the Lakers would let him go but this seems like a great fit. Very happy watching his progress and elated to see those percentage jumps.

The rebuilding Pistons have a new nickname, "The Good Guys"!

It is a far cry from the NBA Champs who were known as "The Bad Boys".

Glad to see SVI is making $1.5 million per year, he deserves it.