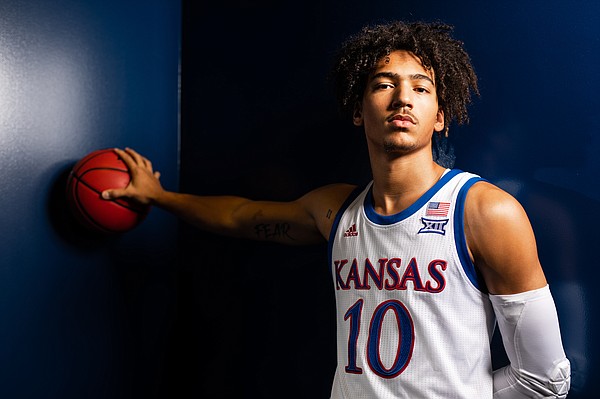 And Wilson, who is expected to return to KU’s campus this weekend for COVID-19 testing and the start of team workouts next week, believes he did exactly that.

Talking this spring on a Facebook Live video hosted by Jabari Johnson, founder of The Heads Up Foundation in Texas, which aims to mentor young people through sports and education, Wilson detailed how the broken ankle he suffered early in KU's home opener last November made him a better player.

“Just being able to learn and sit back and watch (was so valuable),” Wilson said. “I feel like you learn a lot more when you’re not playing, and (you’re) able to see mistakes that other people are making.”

No stranger to being hit by the injury bug, Wilson said his past experiences helped him get through the disappointment of not being able to play at Kansas during his freshman year.

Before coming to KU, Wilson broke his foot during one of his AAU seasons and he also has dealt with other less-severe injuries throughout his career. All of them, he said, helped him approach the 2019-20 season, which featured more rehab and fewer rebounds, with the right mindset.

“I’ve always had setbacks,” Wilson said. “And I’ve always found a way to get around them. I just took this one like this is the next one that’s going to happen in life. It ain’t always perfect, so I just tried to find positive out of it. I got hurt. So now I get to sit back and really watch basketball and break down film that I usually haven’t done.”

Wilson said his growth as a player extended to the role of become a better teammate and supporting the Jayhawks from the bench and throughout practice.

Toward the end of the season, when he was cleared to return to practice, Wilson was able to combine the two approaches and find new ways to help the team that he never knew were possible.

“If I can’t play, I might as well find another way to impact the team,” he said recalling his approach. “I just tried to be a good guy, a good teammate, (show) spirit. Times are tough always in games, so I just tried to be that guy that could talk anybody through anything.”

It wasn’t just the mental side of things that benefited from Wilson’s year off.

“I believe that my leg came back stronger,” he said, adding that he learned how to focus more on nutrition and proper conditioning while he was unable to play five-on-five.

Now that he can again, he’s eager to return to Lawrence to get back to work with his Jayhawk teammates.

“I was learning a lot coming off my injury,” Wilson said. “And I’ve just got to pick it up whenever we get the chance to get back on the court.”