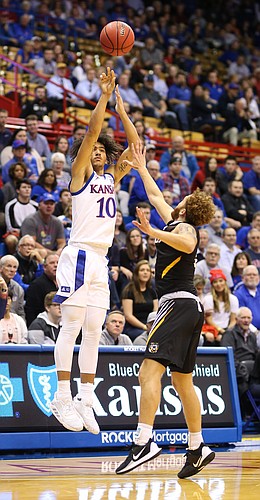 Kansas forward Jalen Wilson (10) puts up a three from the wing during the second half, Thursday, Oct. 24, 2019 at Allen Fieldhouse. by Nick Krug

Out of the boot and off the scooter that aided his rehab from a broken left ankle suffered back in November, Kansas freshman Jalen Wilson has been on the practice court for the Jayhawks during the past few days.

But Self said the freshman from Denton, Texas, remains a couple of weeks away from being fully cleared for practice.

“He is participating in individual (drills), he’s on the court, moving about a snail’s pace, adding a little bit each and every day, and we’re hopeful — hopeful that within a two-week period he can be released and be full go. But we’re not at that point yet, where he can have contact at all.”

With a potential return nearing, Self said no decision had been made on whether to redshirt the 6-foot-8 wing or to try to work him into the rotation before the end of the season.

“We haven’t decided yet,” Self said, noting that he recently talked to both Wilson and his parents about his future plans. “I don’t think you make a decision on what you want to do with him until you see how his health is. If he’s not 100%, why would you even consider it? And if he is 100%, how does he fit in and does he have a chance to impact this team?”

Self said it was still too early to make any final decisions and added that Wilson was “on schedule” for a full recovery.