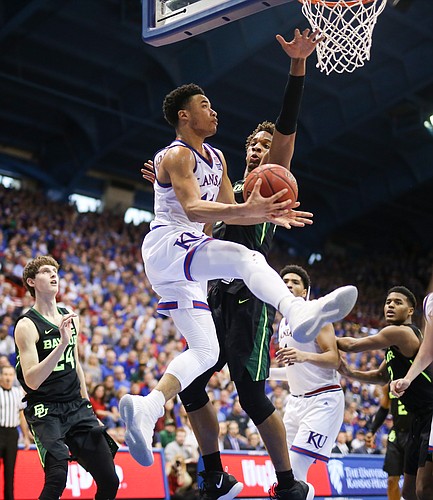 Kansas guard Devon Dotson (11) gets under the bucket against Baylor forward Freddie Gillespie (33) during the second half, Saturday, March 9, 2019 at Allen Fieldhouse. by Nick Krug

We’re now a week into May, and that means it’s draft season for the folks in the NBA and dozens of draft hopefuls who will spend the next several weeks working to impress that one NBA scout, coach or GM just enough to get a shot at a pro career.

With the NBA’s pre-draft combine slated for May 14-19 in Chicago, and a new G League prospect combine on the books for May 12-14 in the Windy City, the next few weeks will be key for all kinds of college players hoping to turn pro.

Former Kansas guard Lagerald Vick was in Charlotte, N.C., last week and Atlanta on Wednesday, participating in a pre-draft workout with the NBA’s Charlotte Hornets and Atlanta Hawks. Atlanta also announced it was bringing in De Sousa and Grimes for individual workouts on Thursday, but, according to a Tweet from the Hawks, only Grimes participated.

In the past week, we took a look at the scout’s breakdown of All-American junior Dedric Lawson as well as his read on Grimes and today, we move on to freshman point guard Devon Dotson, who declared for the draft while making it crystal clear that he would do everything necessary to retain his college eligibility at the same time.

Dotson’s father, Dana Dotson, called his son’s desire to test his draft stock “an information-seeking quest” and the expectation by most involved with the process is that Dotson will be back at Kansas for his sophomore season.

With that in mind, here’s a look at what the scout thinks of Dotson’s standing if he were to stay in the 2019 draft.

The scout’s franchise has Dotson slated in the 30-45 range of the current draft and a recent 2020 mock draft I saw had Dotson pencilled into the No. 29 spot, the second-to-last pick in the first round.

Time will tell if he improves on that standing — whether it’s this year or next — but, for now, here’s a look at the current breakdown.

• His first entry in his scouting report needed just five letters and all caps: QUICK.

• Good scorer off the dribble. You want this kid getting downhill and using his speed and quicks. Really fast first step and gets going downhill. Really good finisher around the rim.

• He’s becoming a better shooter. He seems to have spent a lot of time in the gym this season refining his jumper.

• Really good athlete who is super light on his feet.

• Understands angles and how to approach different matchups. Comfortable chasing specialists and locking down his matchup on the ball.

Now let’s move to the areas that have Dotson slated by most as a second-round pick at best.

• Needs to keep working on his jumper.

• Needs to get better taking care of the ball. He is so fast and because of this can get going in a wild manner that can lead to turnovers and bad passes.

• He can get to the rim whenever he wants but will his lack of size create problems when he has to finish over bigger, taller bodies?

• Limited to who he can guard because of his size.

• Needs to add strength to be able to withstand the grind of our league.

• Foul prone because he takes ticky-tack chances. Needs to be better with his hands.

There’s little doubt that Dotson’s professional future is as a true point guard, both because of his size and play-making ability.

So a big part of what the NBA guys want to see next week and in the future is just how ready Dotson is to truly run the show, both as a primary ball handler and a pass-first point guard who can set up his teammates for easy buckets.

The scout said there were enough moments during Dotson’s freshman season where he showed the ability to do all of those things. But he added that they still aren’t quite fully developed.

“This is all a work in progress,” the scout said. “But coming from being a combo guard with a chance at being a true point guard, he showed some really good stuff.”

Yeah. It's definitely interesting. One 2020 mock draft I saw (I think on ESPN.com) had Dotson listed as the No. 29 pick in next year's draft.

That seems more right, although I'd bet he'll go higher than that when the time comes. But to think he could be close to that right now is a bit eye-opening.

There's no doubt that he's got an NBA future. And his stock is just going to continue to rise. But I think he would benefit so much from coming back and learning to truly play point guard. Doing it for Self, who holds his PGs to the highest standard possible, can only help.

I strongly disagree that there is "no doubt" that Dotson has an NBA future. He is not an NBA lock. Dotson is an extremely good college player, already, and he will improve, regardless if he stays or goes. But, the one critical area that he will almost not improve upon is his height. There is not a single NBA player currently playing where Dotson can deny their three point shot attempt. Dotson's height along with his leaping ability are just too short to defend the perimeter in the make-miss 3-point NBA.

Steph Curry is only 1" taller, so not real confident in your analysis.

This projection certainly isn't in KUs favor...but I hope he is one of those kids that wants to maximize his opportunity by improving his game instead of a kid who wants to cash out early ...he'd be a top pg in college if be came back and would certainly improve his stock further..

My take-a-way: Dotson grades out significantly higher than Grimes, and appears to want to come back for his sophomore year to improve on weaker parts of his game while Grimes appears to have no interest in doing the same.

If KU can sign RJ Hampton from Little Elm, Texas, then even if Grimes were to come back he might very well see less playing time than his freshman season.

One grading component seems to go unmentioned; that is, how well these KU kids grade out in mental toughness and a gritty competitive nature.

Dotson is gone, gone, gone and anyone who hasn't predicted this since he declared simply hasn't been paying attention. The guy plays at a different speed and once he starts working out and the league sees the speed, it's over. He'll be drafted late first-round by someone who needs a solid back-up point guard - which would be a great spot for Devon to land.

NPOY Jalen Brunson was taken 33rd last year. NPOY Frank Mason went 34th two years ago. The fact is that the NBA is awash in point guards more than any other position. Dotson has elite speed, but is smallish for a league that likes to switch defenders. He hasn't shown elite passing abilities yet, and he hasn't shown the consistent ability to score over bigger, stronger defenders, except for beating them down the court. Again, I question how much this scout actually saw of Dotson.

Brett, I hope you are right, but I will also gladly take the other side of that bet. I would love to see Devon try guarding someone like Kyrie Irving.

Well maybe a slight too strong an opinion. There are 233 without foreigners trying to turn pro so hard to say gone definitely. Personally I feel Grimes may also find the competition and hopefully realize another season might be helpful. Mason, Graham and Svi although not pro stars have earned considerable salaries after spending 4 years of college ball.

Is paying attention anything like reading comprehension, as in reading "an information seeking quest"?

As for the comparison to other PGs in NBA, I believe both Mason and Brunson are under 6' which is less than the short (by NBA stds) Dotson at 6'-2". Compare that to Fox at 6-5(?) going in the lottery and dominating playing time over Frank. It is a different game there. I'm believing they know it better than we do. Definitely better than I do.

Unlike Grimes, Dotson has given every indication that his purpose at the combine is to get feedback on what he needs to improve upon and then come back to work on those areas...why should be settle for being a mid 2nd round pick and being a back up when he could improve himself at KU and catapult himself into the 1st round and increase his rookie level contract even more..if I were a betting man I'd bet on seeing Dotson in KU starring lineup next season...plus, like the point was made earlier...the NBA is awash with fast small PG

Interesting that Silvio was a no show in Atlanta. Could it be there's good news on the horizon?

I can't believe (opinion) why there hasn't been a hearing to determine his eligibility. Honestly folks the guys charged and convicted received sentences of less than 10 months. Yet DE Sousa has already been punished a year and can't get a hearing. UNBELIEVABLE

For those still asking why Silvio is not listed-he pulled out. And everyone please take note-if someone is not a 1st round pick, they do not get a guaranteed contract, and if a player is predicted as being late, or borderline 1st round, it would most likely be in their best interest to return to College, and work on whatever they are told they need to improve on-and their strength!

I hadn't seen it reported that he pulled out, but that is even more encouraging.

it would depend..if a player has maxed out what he can improve upon (such as Dedric) and late first round is the best they can even hope for, then it wouldnt be much benefit to return to college and risk falling out of the first round (which does give a guaranteed contract) into the 2nd (which does not) or even worse, be undrafted