KU guard Marcus Garrett is back practicing, getting closer to a return 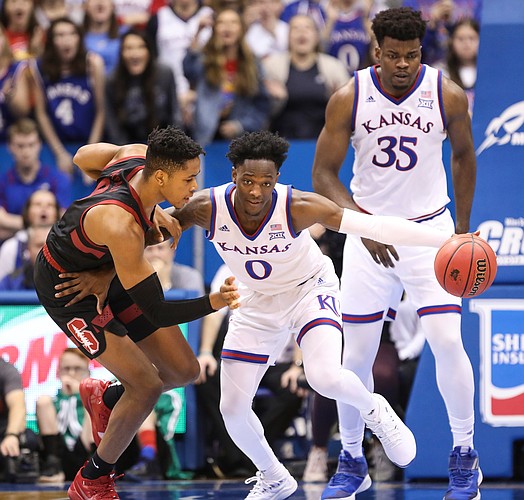 The prognosis for a Marcus Garrett return to the lineup is starting to look better and better for the Kansas men’s basketball program.

KU coach Bill Self on Tuesday night during his weekly “Hawk Talk” radio show said that Garrett practiced both Monday and Tuesday and was making progress toward getting back on the court.

“(Monday) was a very limited, half-court, half-speed type deal,” Self explained. “(Tuesday), he was probably closer to three-quarter speed, but actually played up and down and did some things.”

Self said Garrett, who suffered a high ankle sprain during practice on Friday, Feb. 1, still “doesn’t trust it all yet,” but added that the sophomore guard’s three weeks away from game action would take a toll on anybody’s in terms of rust and comfort on the court.

“I thought he looked pretty good (Tuesday),” Self said. “Hopefully by Saturday, he’ll at least have some rhythm to his game. You know, he won’t be 100 percent by any means. And he may not be (100 percent) for the rest of the season. You don’t know how long these can last.”

Garrett, who was a starter at the 4 position at the time he went down, has missed KU’s last 5 games and the Jayhawks have gone 4-1 without him.

With KU’s two most important games of the season on the immediate horizon — 7 p.m. Saturday at Texas Tech and 8 p.m. Monday vs. Kansas State — the Jayhawks are hoping that getting their best defensive player back in the lineup will provide them with a lift as they make one final push toward extending their NCAA-record streak of 14 consecutive Big 12 titles to 15.

“Marcus has made a nice recovery considering what he had,” Self said Tuesday night. “... He was actually in the majority of the reps (Tuesday) and probably half of them (Monday), so hopefully by Thursday and Friday, he’ll be closer to 85 or 90 percent.”

It remains to be seen how Garrett, when available, will be eased back into the rotation, but it seems as if Self has options and could plug his most experienced guard back into the starting lineup or bring him off the bench during the final few weeks of the regular season.

The latter seems like the most likely option if Garrett is able to play Saturday.

"Well, I don't know that Marcus will be well enough to play a big role (Saturday at Texas Tech)," Self said. "I hope he is, but as of now, I would think it would be pretty limited. But as we move forward, I would think that it would be a situation in which it would do nothing but help us. I mean, the fact that you may not have to play (freshman point guard) Devon (Dotson) 45 minutes anymore or 40 or 38. Maybe with Marcus in the game, you can play small, you know, five to seven minutes a game, so maybe even (junior forward) Dedric (Lawson) can come out of the game a little bit.

“Who knows how it’ll play out. But I do think it gives us our best chance to win, whenever you have your team’s best defender that can play possessions against the other team’s best offensive players. And, certainly, when Marcus is healthy, he can do that for us.”

With 5 games to play in the regular season, Kansas and Texas Tech are currently tied for second in the Big 12 race at 9-4, one game behind Kansas State, which sits at 10-3. Baylor and Iowa State sit two games back at 8-5.

The Wildcats play host to Oklahoma State at 3 p.m. on Saturday, before coming to Lawrence on Monday night for what many already are calling one of the biggest games in the history of the Sunflower Showdown.

The two teams met in the Elite Eight in 1988 for the right to go to the Final Four. So it’s hard to say this one is bigger than that one. But in terms of a regular-season game, with so much hype and the stakes as high as they can get, Monday’s battle figures to create a wild scene at Allen Fieldhouse.

Monday's game will be huge if and only if we pull the upset at Texas Tech. Otherwise, Monday will likely be irrelevant in terms of the Big 12 race.

Irrelevant for us, but pivotal for Saturday's winner. Far from irrelevant.

If it ain't broke don't fix it. The current line-up has worked. Don't kill Karma just to get a player some time. If KU can win Saturday, and that's a big IF, then we've got a shot. I just don't know where a 2nd Big XII loss would come for KSU so I don't KU can lose Saturday and still share.

As great as the streak is, it's FAR more important to be prepared for the playoffs, so it's not a matter of just getting a player some time; it's easing him back into the rotation so he'll be as close to 100% as possible when the real season starts.

The Jayhawks are extremely sloppy at taking care of the ball. Fix that or prepare to be run out of the gym in Lubbock.

So true. The idea of Garrett relieving Dotson sounds good to me. I would play 8 and rotate him with Ochai and Dotson and use his ballhandling and defense when starters need a break. it would look like:
McCormack - Lightfoot
Dedric - Lightfoot
KJ - Grimes
Ochai - Garrett
Dotson - Garrett
Moore would ride pine and if Vick comes back then maybe put him behind KJ and move Grimes over behind Ochai. Vick coming back makes it crowded at Guard especially since Grimes has just not clicked and we keep playing him. But we probably could use Vick's firepower in March and it's great to have Garrett as a stopper. Knock on wood, hopefully we never get into foul trouble with the bigs again. KJ would have to rotate up and play either 4 or 5 spot if Dedric or Mac get into trouble and we have to play too many guards it could cause inflamation of KU's chronic turnoveritis.

In other news -- I know the NCAA looks the other way on Puke issues but - are they checking this guy's p*ss???? https://bleacherreport.com/articles/2821619-dukes-zion-williamson-says-he-gained-100-pounds-in-2-years-during-high-school?utm_source=cnn.com&utm_medium=referral&utm_campaign=editorial C'mon maaaannn!

Off that subject, but I have been halfway hoping Dok has been learning to shoot FTs left-handed while he rehabs. Probably wouldn't hurt. LOL. Go Hawks!!

We have won 5 or six games without Garrett and the current line up seems to be working so why is it we would want to start Marcus over Lightfoot, Mack or KJ? Could it be because of all his 3 point bricks? Oh no is it his defense when he is defending the other teams 4 as they post up on him and back him under the basket for a eàsy bucket? Pleàe keep our current rotation going!!!