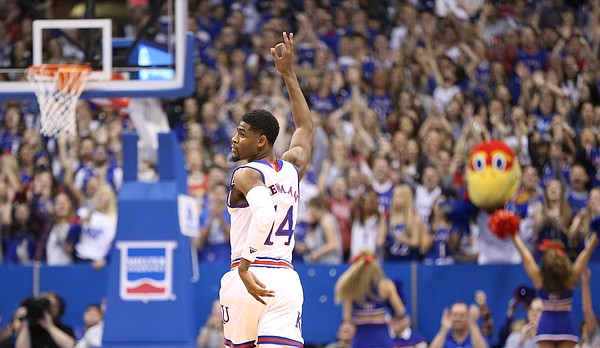 Quick grades for five aspects of KU’s 79-68 win over Texas A&M on Saturday at Allen Fieldhouse in the Big 12/SEC Challenge.

The Jayhawks were lights out in the first half, connecting on 10-of-19 3-point shots and running up and down at will on the slower A&M team. KU finished 12-of-26 from 3-point range for the game and made 7-of-11 free throws while dishing 16 assists and turning it over just nine times. Perhaps most important in KU's victory was the fact that the Jayhawks dictated the pace of play throughout the night and forced A&M to get out of its comfort zone a few times to try to catch up.

KU's first-half defense was on the short list of top defensive halves this team has played this season and, for the game, the Jayhawks held A&M to 44 percent shooting and 27.8 percent from 3-point range for the game. The biggest key for KU's defense was its ability to handle A&M's bigger bodies, particularly in the first half. “They pushed us off the block and did a good job of getting us out of position to score,” A&M coach Billy Kennedy said after the game.

Udoka Azubuike had some big moments but also missed five of his first six shots and made a couple of bonehead plays, none bigger than the technical foul he was whistled for after a monster dunk that drew the ire of KU coach Bill Self and an extended stint on the bench. Mitch Lightfoot was rock solid once again in 16 reserve minutes. The sophomore sub is really finding his footing of late. The big fella was terrific in the first half, but he has to do more to be able to stay on the floor. If he can't, it's going to cost this team.

Svi Mykhailiuk and Malik Newman were terrific, Devonte' Graham controlled things while playing another 40-minute game and Lagerald Vick and Marcus Garrett each showed solid spurts, particularly on offense. Defensively, Bill Self said Garrett was the most impressive guard in the game. Add all of that together and, good numbers or not, it's an A-type performance for the KU backcourt, which is impressive given the fact that Graham shot just 2-of-11 from the floor.

Marcus Garrett flashed some offensive ability — including draining and outside shot — and Mitch Lightfoot hit a momentum 3-pointer just before halftime. Even Silvio De Sousa contributed a highlight moment, hustling back in transition to block a shot during his two minutes on the floor. Garrett and Lightfoot combined to shoot 6-of-6 from the floor for 14 points and three rebounds in 33 combined minutes.

I didn't think we got to the line for 11 attempts. It sure didn't seem like it.

Wouldn't it be incredible if Malik, Svi, Devonte, and LaGer all had big games the same day, let alone Doke?

This game and the Oklahoma game represent a shooting nadir, not as in Nadir Sharpe, but as in the very bottom, for Devonte. And yet we still should have won both. My gut feeling is he will have a great shooting game in Manhattan. After blowing the OU game, we need the one in Manhattan, otherwise we will be very lucky to win 14, but if we win in Manhattan, psychologically it will be huge. We will put 2 games between us and KState, and then if we just go 6-3 for our last 9, then I think we at least tie.