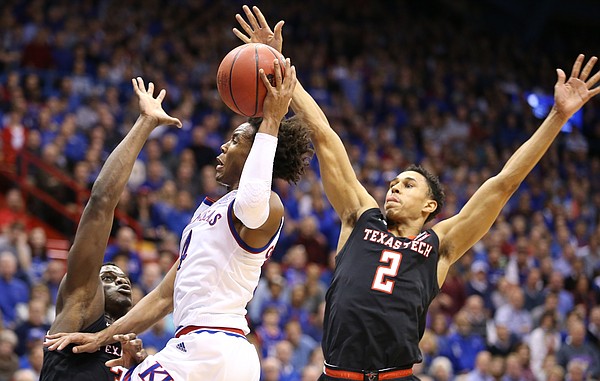 Quick grades for five aspects of KU’s 85-73 home loss to No. 18 Texas Tech on Tuesday night at Allen Fieldhouse.

It was a weird game if you're looking at the final stat sheet. Despite losing by double digits at home for just the third time under Bill Self, the Jayhawks out-shot Texas Tech, 45.5 to 43.3, were not torched from 3-point range — both teams made six triples and shot around 25 percent — and even got to the free throw line a season-high 23 times, making 17 of them. Too bad none of it came early or easy. A major drought open the game put the Jayhawks in a big time hole that they could never climb out of it and this time the offense was as much to blame as the defense. The bigger issue was not the point totals or stat lines, but the fact that the Jayhawks could not get the ball inside to Udoka Azubuike on a consistent basis and, for the most part, took the shots that Texas Tech wanted them to take instead of good shots that came from running offense.

Bill Self said he thought his team actually guarded Texas Tech's actions fairly well, but the way the Jayhawks were guarding the ball inspired the Red Raiders to stop running many. Instead, it was just go by your man and get to the rim or crash the glass and get a second-chance opportunity. KU's defense was outplayed and out-toughed from start to finish in this one, with Tech's 85 points and 44-29 rebounding edge being the most damning stats.

Udoka Azubuike had his moments, but only like two or three of them. Other than that, the big fella turned in by far his least impressive game in the past few weeks and finished with a low-impact 11 points and 7 rebounds in 28 minutes. Mitch Lightfoot played for just eight minutes on a night when KU could have used help from someone.

Devonte' Graham was pretty good in terms of playing hard, being aggressive and trying to will his team to victory. His 27 points and 6 assists were overshadowed by his five turnovers and 2-of-8 3-point shooting. And he was by far the best KU guard in the game. Svi Mykhailiuk played out of control and shot 4-of-11. Lagerald Vick never really showed up or produced anything on the stat sheet. And Malik Newman, though better in driving the ball to the rim, still struggled defensively and jacked too many ill-advised shots. Marcus Garrett, in his third start of the season, was among the better players in this one and that, though nice, is not at all what Kansas wants or needs.

Sam Cunliffe and Newman combined for 16 points in 30 minutes but were not the kind of presence that Graham needed to help him. Lightfoot's line of mostly 1's and 0's matched his impact and KU's bench was outscored 42-16 by Texas Tech's.

Professor Matt Tait's Grading reminds me of KU Physics Exam Initial Results! Fortunately, KU Physics Profs were nice enough to "Grade on a Curve". Evidently , "Grade Inflation" does not apply at KU Sports. We need a "Mass times Velocity" Shift heading into the next game at TCU! Jamie Dixon will win 6th Man of the Year again (he is always on the Court)!