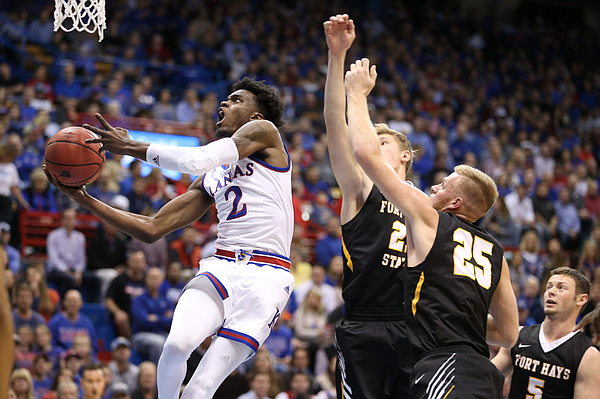 Lagerald Vick goes to the rim for Kansas during Tuesday's exhibition victory over Fort Hays State. by Matt Tait

Quick grades for five aspects of KU’s 86-57 victory over Fort Hays State on Tuesday night in the exhibition finale at Allen Fieldhouse.

Kansas was sluggish and sloppy in the first half and turned the ball over almost as many times as the Jayhawks recorded an assist. That led to just a 38-33 lead at the break. In the second half, however, thanks to some red hot shooting by Devonte’ Graham (27 points, 8 assists), Kansas was much more efficient and effective on offense, which allowed the Jayhawks to open up a big lead and cruise to victory.

Even when Fort Hays State missed, they found a way to get open looks. Beyond that, KU gave up far too many open jumpers and struggled to use its superior size and athleticism to suffocate the overmatched Tigers. The intensity was much better in the second half, but the guess here is that Bill Self will remember more what his defense looked like in the first half. The second half showing is what he expects.

Udoka Azbuike and Billy Preston both had some great moments and both showed a willingness and understanding that hanging out down low is where they need to be. That led to a combined line of 26 points and 12 rebounds, both numbers that probably should’ve been a tick higher considering Fort Hays State’s lack of size.

Graham and Vick were pretty good from start to finish. Malik Newman and Svi Mykhailiuk struggled for most of the night. Marcus Garrett’s workman-like effort was the tiebreaker and led to this grade landing as a low A instead of a high B.

Preston and Garrett both earned second-half starts, which shows both the fact that Self was pleased with their play and disappointed in the play of Mykahiliuk and Newman. Mitch Lightfoot logged limited playing time and had just 3 rebounds to show for it, but Garrett and Preston did enough to give KU’s bench a solid grade.

Pretty generous grades considering we played footsie with FHSU for the first 20 minutes.

By the way, Matt, I tried to get in touch with you about something last Saturday. How can I change my user name for this site from Jayhawk_Unto_Death to something else?