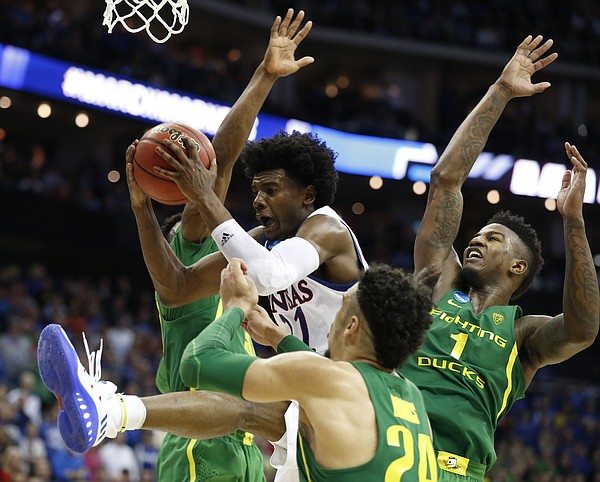 Kansas guard Josh Jackson (11) is swarmed in the paint by Oregon players including Oregon forward Dillon Brooks, front, and Oregon forward Jordan Bell (1) during the second half on Saturday, March 25, 2017 at Sprint Center. by Nick Krug

By far KU’s worst grade of the season in this category on a night when the Jayhawks flat-out could not hit anything. KU finished 21-of-60 for the game, including 5-of-25 from 3-point range. The Jayhawks were tight, flat, struggled to get to the rim (Oregon big man Jordan Bell had eight blocks) and never really got going in transition, finishing with just 11 fastbreak points.

KU’s defense actually wasn’t that bad. Especially in the second half, when the Jayhawks limited Oregon to 40 percent shooting (30.8 from 3-point range) and got enough stops to get back into the game. But the area that had played second fiddle for most of the season, got no help from the Jayhawks’ high-powered offense on a night when Kansas was held to a season-low 60 points.

Landen Lucas and Dwight Coleby — the only two KU big men who played — combined for nine points, four rebounds, one assist, one block, one turnover and two fouls in 37 minutes. And yet KU routinely threw them the ball in their half-court sets. Perhaps just another sign of how frustrated the Jayhawks were by their shots not falling elsewhere.

Mason had an absolutely stellar first half — but was neutralized in the second — and Josh Jackson had a strong second half after doing next to nothing in the first. Add to that the fact that Devonte’ Graham failed to make a shot and Svi Mykhailiuk and Lagerald Vick were decent in supporting roles and the whole big, ugly mess lands somewhere in the low B range.

Vick did a solid job of filling in for Josh Jackson initially, but finished 2-of-8 overall and 1-of-5 from 3-point range for seven points and three rebounds. Coleby, who had been so good in some big situations in earlier rounds, was almost unplayable and logged just four minutes.

they were not ready to play. Even in the warmup they looked off.

Bill Self gets an F for last night. Self has now been in the Elite 8 9 different times and in 6 of those games, his team (including 2000 at Tulsa) has produced their lowest single game point total for the season. Once or twice you can call it a coincidence, but 2/3 of the time, the Elite 8 has been KU's worst offensive game of the season. Whatever preparation Self uses for the Elite 8, he needs to quit doing it and figure something out that won't make his team crap their pants in the Elite 8.

Agreed, this loss was on Self. Great coach but cant get to the end.