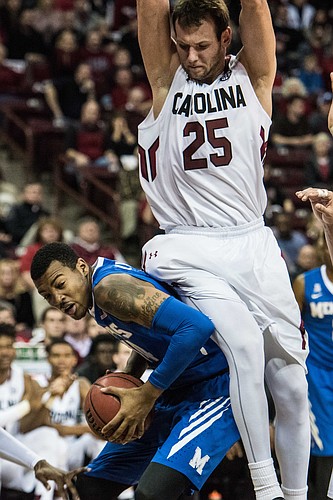 Call it a parting shot or a bad way to make a first impression, either way a snapchat video of newly acquired Kansas forward K.J. Lawson, the former Memphis Tiger who, along with his brother, Dedric, committed to KU earlier this week, recently surfaced that showed Lawson using profanity which seems to be directed at Memphis coach Tubby Smith.

If Smith was indeed the target of Lawson's rant, the reason is likely his frustration with the way his father, Keelon Lawson, was treated during the Lawson brothers' final season with the program.

Hired by former Memphis coach Josh Pastner as a full-time assistant coach, Keelon Lawson was demoted to director of player development by Smith for the one season that the two sides were together.

That, in part, led to the transfer of his two sons, both Memphis natives, and may have cost the Tigers a heck of a lot more. Not only do K.J. and Dedric have two younger brothers who are rated among the top players in their classes, the whole thing serves a serious blow to Smith's standing in talent-rich Memphis, which has been vital in the Tigers' success for years.

According to a recent column from Gary Parrish, Memphis is now down to just two returning scholarship players, after a couple of graduations and mass transfers decimated the program.

While cleaning up that mess will be Smith's responsibility, the Lawson brothers soon will be the responsibility of KU and the guess here is that K.J. will learn sooner rather than later that this kind of behavior will not be tolerated in Lawrence.

Keelon Lawson said on Parrish's radio show earlier this week that his sons would have stayed at Memphis had he been allowed to keep his job as a full-time assistant. Instead, they're now Kansas bound.

Dedric and K.J. Lawson will sit out the 2017-18 college basketball season in accordance with NCAA transfer rules and become eligible to play before the start of the 2018-19 season. They will be able to practice with the Jayhawks throughout their transfer season, which should give Kansas' eligible players an added edge in practices.

Update: Lawson took to Twitter Thursday night to issue an apology for the video and his comments.

Like I said, these guys are most likely bad news. Coach should cancel the whole deal but I bet he won't. Not if they can play. Evidenltly that's all that matters.

I'm sure, like many coaches, he thinks he'll be able to drill some sense through their skulls.

And Scott Callahan, as you say this, you will be the biggest homer this side of the Mississippi when they win a title.

"While cleaning up that mess will be Smith's responsibility, the Lawson brothers soon will be the responsibility of KU and the guess here is that K.J. will learn sooner rather than later that this kind of behavior will not be tolerated in Lawrence."

It sounds like you are saying that Bill Self does tolerate it when his players say or do stupid things. Maybe you can ask Bragg, or Brannen Greene, or Naadir Tharpe.

So I assume that you'll come back with the argument that Jackson should have been suspended after the vandalism incident, and maybe you're right. But what would satisfy you? My guess is that you wouldn't be happy with a one game suspension for an unspecified violation of team rules, however, if there were no charges (yet) then likely that would have been it.

I for one don't doubt that Bill Self let Josh Jackson understand the severity of the situation. My guess is that the reason that Josh Jackson didn't tell Bill Self about the later traffic violation is that he was fearful of the coach's wrath. Well, he got suspended for an incident that would have actually been a non-issue if he only would have told the coaches about it before it went public.

a very unfortunate lack of class by KJ. It would be nice to be a fly on the wall and see how Bill Self addresses it with him.

I imagine Bill Self being overall fairly gentle with it ("Come on man,what were you thinking! Don't put that out on social media") but also delivering a harsh warning that such a lack of decorum on social media will have serious consequences in the future.

The administration at Memphis made their bed, and now they have to lay in it. I can't blame the kids for being upset. http://www.sportingnews.com/ncaa-basketball/news/memphis-kj-lawson-dedric-lawson-transfer-tubby-smith-tom-bowen/sfgv0bpwjhbb1v51rr2pzj1bq

But If anyone thinks Bill's gonna take these kids in and let them run his program afoul, you're crazy. Social media training 101 will be their first course in the athletic department when they arrive to campus.

When was the last time Bill Self EVER let anyone run roughshod with his program? He may suck at winning Elite Eight games, but he doesn't suck at making sure everyone knows they're not bigger than the program.

I've seen people on this site expressing hopes that what we're getting in the Lawson family won't be like what UCLA got from the Ball family. A profanity-laced farewell video by K.J. Lawson does not bode well for our hopes. That's not the tonesetter we want from these dudes as they come to Lawrence.

After they go through the Bill Self "boot camp", I'll bet they'll be saying the same thing about Self! And, Daddy won't be able to come to their rescue. Hopefully, the current and former other Memphis players who coaxed them to transfer to KU will explain the facts of life to them regarding behavior in our world.

New coaches routinely let prior assistants go and bring in their own assistants. Occasionally they'll keep an assistant or two around. In this case, Smith could have just let Lawson go and that would not have been at all unusual. Instead, he kept him on, albeit in a lesser position, but he kept him on. And I'm hearing he even gave him a $20k raise. I am not sure of that but that's what I'm hearing. The sons, to me, are too young to understand all this but Dad surely should have explained the real world to them. I'm hoping Dad let's the KU coaching staff do its job and doesn't try to interfere.

When Roy pulled the scholarship offer to Juron Rush, very few were surprised.

Likewise, very few Kansas fans would not be surprised if Self cancelled the offers to the Lawson's.

Not real good to land in Self's dog house before setting foot in campus.

This is not a great look, but not anything egregious either. Just sounds like FOE mentality to me. Hopefully HCBS can get them to channel the energy productively rather than into a childish social media campaign.

Ironic that you bring up FOE. Sort of reminds me of an airsoft incident from years ago. Not a great start. Hopefully, they won't be surprised when Coach teases him about it.

A week from now, this will all be ancient history.

While K.J. was clearly tasteless and should have to "bake in his stew" for a period of time, Tubby has a lot of problems at Memphis and will likely not last more than one additional year. He has 8 transferring out and has not recruited even 1 top 100 high school player for next year.

Tubby likely will have to troll the juco ranks just to field a team next year - - not too dissimilar to what UNLV faced this past year under their new coach, Marvin Menzies, who was hired when the other new hire, Chris Beard, bolted for Texas Tech when Tubby went to Memphis. Just all the more reason to be thankful for what we have at KU.

I've mentioned this many times but at least he didn't say he grabs women by the p...y and is elected by some ppl as POTUS. It was at a party & who hasn't said something stupid or vulgar? And captured on snapchat probably w/o his consent. No big deal so ppl need to chill out. Now if he starts tripping opposing players, then I say we worry

Well, I'll give the Lawsons credit, they've fired a warning shot on how this could all go down. When anything questionable or objectionable goes down, people cant be surprised. I dont care either way, but we cant say we've not been warned after this.

I trust Bill Self knows how to handle this situation. As a HOF coach and holder of 13 straight big 12 titles, a national championship, and 10 home losses all time (in 14 seasons) I trust the man knows how to handle college basketball players. Just a hunch.