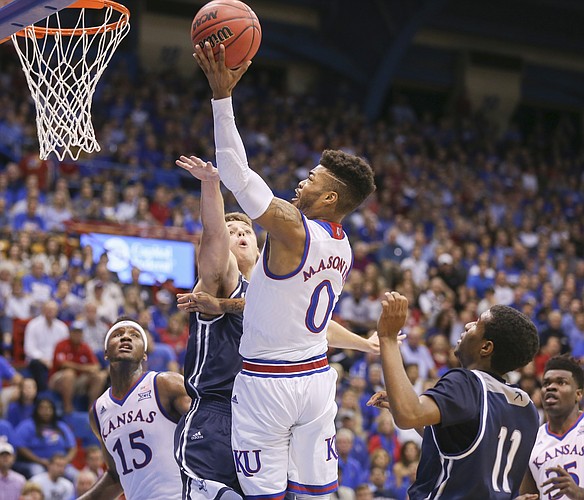 Kansas guard Frank Mason III (0) gets to the bucket against Washburn during the first half, Tuesday, Nov. 1, 2016 at Allen Fieldhouse. by Nick Krug

Quick grades for five aspects of KU’s 92-74 victory over Washburn in the Jayhawks’ exhibition opener at Allen Fieldhouse on Tuesday night.

The Jayhawks scored 92 points and had some efficient moments, but overall were far too loose with the basketball, missed too many free throws and had a few too many stretches of one-on-one play. The Jayhawks’ 39 percent clip from three-point range helped salvage the offense’s night.

KU’s size and length really bothered the Ichabods everywhere but the three-point line, where WU hit 10-of-26 tries. Kansas also recorded 9 blocked shots, led by 2 apiece from Jackson and Azubuike.

Landen Lucas and Udoka Azubuike recorded 5 fouls in the first 5 minutes of the game and generally had a difficult time scoring in the block despite KU trying to force feed them the ball during portions of the game. Beyond that, KU's bigs were out-rebounded 45-44 and consistently got out-hustled to loose balls and missed shots.

Frank Mason (one assist shy of a triple-double 21-10-9) and Lagerald Vick (9 points in 29 minutes) were among KU’s best players in the game and Josh Jackson, once he got going, showed why he was the No. 1 recruit in the country last year. He finished with 14 points, 4 rebounds and 5 turnovers in 19 minutes.

Vick and Sviatoslav Mykhailiuk knocked down shots and Azubuike and Lightfoot brought pretty good energy and were active throughout the game. Other than Vick’s first half, no bench performance stood out as the kind that could win KU a game, but nobody really hurt the Jayhawks either, other than Azubuike’s early foul trouble.

Sorry Matt, but the defense was a C or D. They let Washburn score twenty five points in transition. What are they going to do against national player of the year front runner Grayson Allen? Or Jayson Tatum? Or sharpshoot Luke Kennard? They better start taking it seriously or it will be a blowout like UK a couple years ago.

And no, I am not a chicken little - just expecting a bit more fire and looking like they had something to prove.

I agree. And I think Self did, as well. Meant to change it to a C before I posted but the press conference started. It's a new feature. I'll get better. Both at posting it quickly and at grading! ;-)