What caught my eye from Day 1 of spring practice 2016 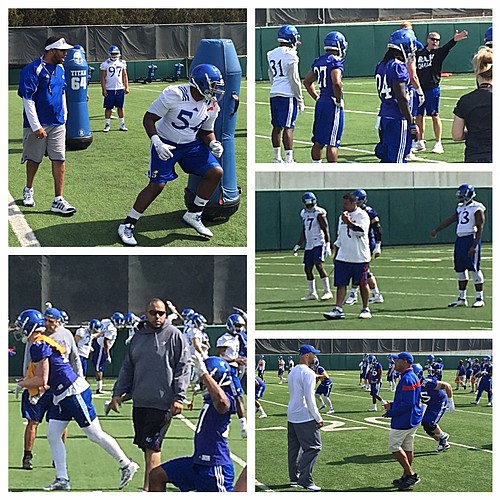 Spring football is back and the Kansas Jayhawks were out on the practice fields for the first time this spring on Sunday afternoon.

Even though it marked just the second spring under head coach David Beaty, I have to admit there was a sense of stability out there today. And that’s all the more impressive when you consider that there were five new full-time assistant coaches and a host of other new support staff members out on the field.

It looks like that has happened. Not only did things run smoothly like they would at a program with a coach who has been there for years, but they also were very crisp with getting in and out of drills and the players seemed to be very clear on who made up the first team, who made up the second team and so on down the line.

It’s just the first day of spring and it’s not worth reading too much into that. But, if given the choice, you’d much rather have things run that way to open the spring than the alternative.

Here’s a quick look at a few other things that caught my eye on a day when, I’ll admit, even I was a little overwhelmed trying to keep track of all the new faces and new numbers:

• One of the first things I saw and heard out there came from sophomore wide receiver Jeremiah Booker during a warm-up drill. Booker, who looks even bigger than he was a season ago even though he’s listed at exatly the same height and weight (6-2, 195), looked around at his teammates and said, “Where’s the music? We need to get this (practice) pumpin’” Extreme enthusiasm on Day 1 is hardly a surprise, but Booker already has been more vocal than I heard him all of last season. That’s a good sign for the Kansas offense.

• Defensive coordinator Clint Bowen was sporting a pretty fierce beard, something I haven’t seen on him very often throughout the years. I’m sure part of it comes from burning the midnight oil to get ready for spring practice, but the other part probably comes from his extra efforts in helping his wife, Kristie, get her new business in downtown Lawrence ready for its grand opening. 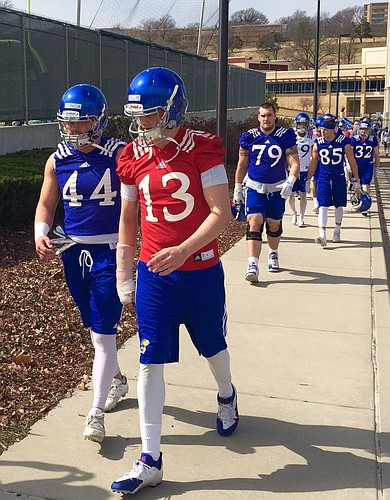 A closer look at Ryan Willis' cast on Day 1 of spring football 2016. by Matt Tait

• By now you’ve all heard that returning starter Ryan Willis would be limited this spring because of a wrist injury he suffered while playing pick-up basketball. For those of you who had asked, it’s the right wrist and Willis is wearing a pretty good-sized cast. That did not keep him from getting out there, though. Obviously he was not able to make any throws but he was taking mental reps and participating in as much of the conditioning stuff as he could. In fact, at one point, Beaty worked exclusively with Willis on some kind of pre-snap drill in the north end zone. It was an unfortunate accident but Willis seems determined to not let it set him back too far. With Willis out, Montell Cozart and Deondre Ford got the first- and second-team reps during the fast start period. 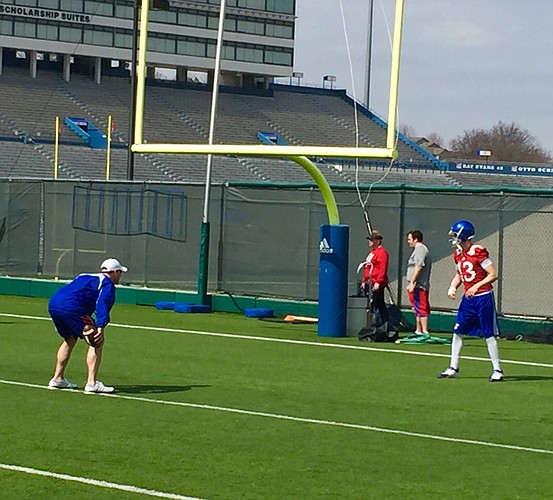 • I thought it was pretty cool to see some of the new coaches collaborating on random things. These guys have all worked at a bunch of different places and learned different ways to do things and there’s no doubt that it’ll take a few days to get on the same page. Clearly, though, they’re not shy about asking for help when they need it. Seems like a good group.

• Speaking of the new coaches, defensive line coach Michael Slater seems like he might be good for a soundbite or two. The best bit I heard from Slater on Sunday came during a D-Line drill designed to teach proper hand technique: “You’re working with razor blades not sledge hammers,” Slater shouted. He’s a vocal coach who, like his predecessor Calvin Thibodeaux, is not afraid to jump into the drill to show the proper form when needed. In fact, Slater reminded me an awful lot of Thibodeaux.

• ESPN sideline reporter Holly Rowe, who has done some media training with various KU teams during the past couple of years, was at practice on Sunday, soaking up the sunshine and seeing some familiar faces.

• We get to talk to Beaty after today’s practice so we’ll bring you his thoughts from Day 1 later. The Jayhawks are off Monday and will be back out there Tuesday for practice No. 2. We’ll be out there with ‘em and are supposed to get player interviews after Day 2. 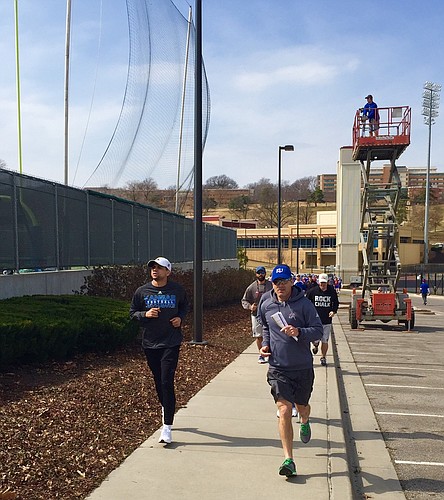 KU's assistant coaches set the tone for Sunday's opening day of spring practices by running from the football complex to the practice fields to lead the charge. by Matt Tait

Hey Matt, first question for the new season: What's the odds that Montel Cozart get switched from quarterback to another position?

Hey Roger - Thanks for the question!

The only way I see this happening is if two or more QBs are ahead of Cozart coming out of preseason camp. And I'm not sure that will be the case.

Here's the thing about Montell: He wants to play and I'm sure he wants to start. And, beyond that, I'm sure he still believes he can. Remember, he was injured last season. So you never know what could happen.

But even if Willis or another QB beats him out this season, it would not surprise me in the least to see Cozart want to stay at QB even in a back-up role. He's a good teammate and a good leader and he just wants this team to win.

It will be interesting to see what exactly happens with him, but I wouldn't say it's a lock that he'll be playing a different position this year. In fact, if I were betting, I'd bet he stays at QB.

"KU's assistant coaches set the tone for Sunday's opening day of spring practices by running from the football complex to the practice fields to lead the charge. by Matt Tait"

Unfortunately, the video would seem to indicate that the players weren't really following as they strolled to the fields. Hmmmmm?

Players were wearing spikes...dangerous to run on concrete.

Did I miss something during the off season? I don't see Kent Taylor on the roster from the official KU website. Last year he was listed as a junior.

Taylor is done at Kansas. Didn't get specific details of why he left, but it sounds like he left on good terms and the Jayhawks were sad to see him go... Here's more...

Assuming Ryan Willis recovers quickly from a most untimely, and in hindsight, silly injury to his throwing arm, he will most likely be the starter. But there remains something intriguing about Montell Cozart, given his size and speed. I hate to say this after just one day, but you go into the season as the #2 QB, there is a high likelihood you will get a shot. Given the skills of our O-line across a whole season in the Big 12, our QB's are going to take hits, and lots of them. We'll need 2 and maybe 3 serviceable quarterbacks.