The end of the first week of our summer series brings us to our first defensive veteran, Anthony Olobia.

Although Olobia has played just one season in a KU uniform, he has been in Lawrence for two seasons and is heading into his third after two standout seasons at junior college.

He might not carry with him the same type of familiarity as a four- or even five-year program guy, but he is older and more experienced than many of his peers and is physically mature and in better shape than ever.

His name figures to be called a lot this season and, after a strong spring, he looks to be running with KU's first string defense heading into the summer. 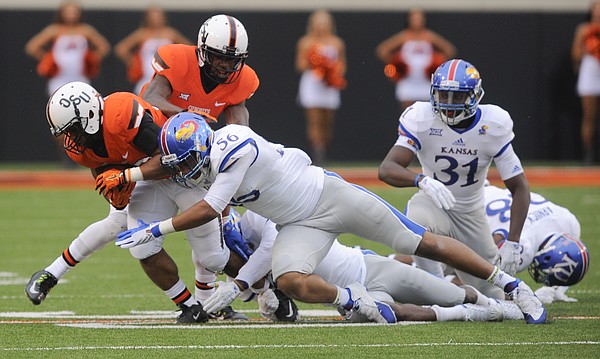 It’s been long enough that some may have forgotten, but Olobia actually was one of those hyped-up Charlie Weis transfer recruits way back in 2014.

Ranked the second best juco defensive end in the country that year, and the 55th best juco prospect overall, Olobia came to KU with a fair amount of hype but saw that die down quickly after an immediate injury cost him the 2014 season.

Looking back, that may have been the best thing that could have happened to him because (a) it allowed him to better acclimate to college and Division I football, and (b) it gave him another year to develop his body in the weight room and learn in the meeting and film rooms.

Although he has yet to become the force that some hoped and expected he might, Olobia is trending toward being a solid rotation-type guy at D-End.

Battling with Damani Mosby — a player with a similar past and path to KU — at KU’s defensive end spots opposite promising sophomore Dorance Armstrong, the opportunity is there for Olobia to become a big part of the KU defense in 2016.

At 6-5, 239, Olobia is long and lean and has some noticeable strength to his style. He’s less of a speed rusher than Mosby and typically uses a variety of moves along with his strength to get to the quarterback.

In 12 games last season, including 4 starts, Olobia finished with 23 tackles, 4 for loss, 1.5 sacks and 2 quarterback hurries. Given his continual growth and development, along with what figures to be even great opportunity, doubling those backfield tackle numbers should not be considered out of reach for Olobia.

With Ben Goodman gone and Armstrong still learning and coming into his own, KU will be counting on the veteran status of Olobia both in terms of leadership at the position and performance on the field.

Between Mosby, Armstrong, and Olobia, are they exclusively strong side vs. weak side DE's, or are the positions in our D/Big12 interchangeable enough that they could rotate in for one another?

Mosby and Olbia are 2 JC's that I was certainly hoping for more production from. Is it a matter of getting more disruptive production from the DT's to free the edge? As with most of the team, we seem to be trending in the right direction in the middle of the line, so still hopeful.

Are there other DE's that should figure in the mix?

I'll save my DT questions for the first on the list :-)