This is not a list of the 25 best players on this year's team. That would be much easier to pinpoint and, while still key, would not exactly demonstrate the full value that each player has in regard to the 2016 season.

Remember, this is not an exercise designed to identify KU's best players but an attempt to pinpoint which players, with strong seasons, could have the biggest impact for Kansas this fall. 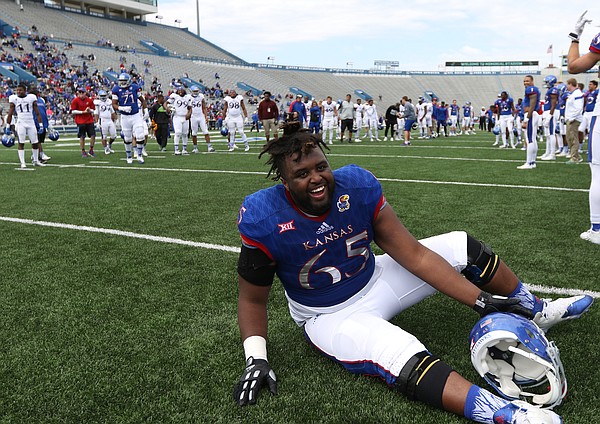 Kansas offensive lineman Jayson Rhodes (65) picks himself off the ground after falling down laughing while fellow lineman field kickoffs during the Spring Game on Saturday, April 9, 2016 at Memorial Stadium. by Nick Krug

Rhodes is a good one to kick off this summer’s series with because he represents a couple of key aspects of the KU football program at this point in time. One, through hard work in the weight room and with the strength coaches, Rhodes has reworked his body and is in the best shape of his career, a move that allowed him to slide into the starting left guard spot throughout the spring.

Two, Rhodes plays offensive line and there’s no question that the most important position for the Jayhawks this fall will be the big bodies up front. Not only will they need to keep carving out holes for the Kansas running backs, but they also, and more desperately, have to keep opposing defenders off of KU’s quarterback if the Jayhawks hope to be competitive in 2016.

The 6-foot-4, 311-pound Rhodes is well equipped to do just that. Even with his former physique, which featured more fat, less muscle mass and more bad weight, he showed good feet and solid athleticism, especially for a man his size. Now, with a more efficient frame and a new home at guard instead of on the outside against speed rushers, Rhodes can use those feet and his newfound strength to move bodies and get up the field.

The communications major who is minoring in sociology played in just three games a season ago but, all of a sudden, has the look of a guy who believes he will be a 12-game starter.

That kind of swagger can become contagious and, on an offensive line that is starting to develop some depth and could benefit from positional competition as much as any spot on the roster, that attitude carried by Rhodes and others can only mean good things for the Jayhawks in 2016 and beyond.