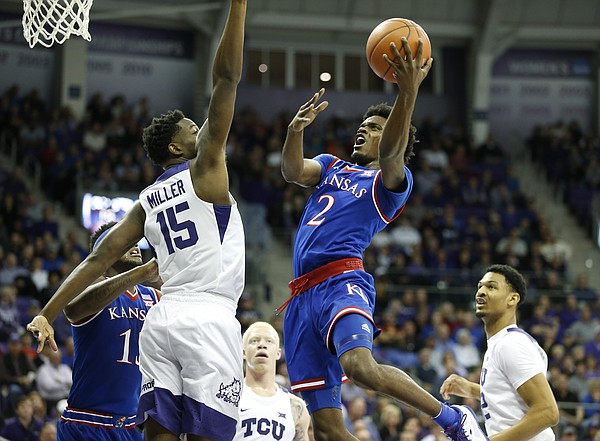 Kansas guard Lagerald Vick (2) floats to the bucket against TCU forward JD Miller (15) during the first half, Friday, Dec. 30, 2016 at Schollmaier Arena in Fort Worth, Texas by Nick Krug

Quick grades for five aspects of KU’s 86-80 victory over TCU in the Jayhawks’ Big 12 opener Friday night in Fort Worth, Texas.

The Jayhawks topped 80 points, saw five players reach double figures and shot 80 percent from the free throw line. But a miserable 1-of-9 stretch to open the game and 43 percent shooting overall balanced out those positive numbers.

TCU controlled portions of this one offensively and Kansas was never able to put the Horned Frogs away because TCU simply kept scoring, most of it coming at the rim or behind the three-point line.

Only two true big men played and those two players combined for 20 points and 26 rebounds in 46 minutes. Landen Lucas (17) and Carlton Bragg Jr. (9), were both terrific on the glass from start to finish.

KU coach Bill Self referred to his guards as one-dimensional players on Friday night, good on offense and not-so-good on defense. But the good side far outweighed the bad side on a night when the Jayhawks needed every point they scored.

Carlton Bragg Jr. still looked off offensively, but he played hard, grabbed nine boards and hit a big bucket late to help the Jayhawks hang on. Lagerald Vick, meanwhile, poured in 17 points and was huge in the first half as KU crawled out of a 10-point hole and led by four at the break. No other KU bench players entered Friday’s game.

Basketball's "silly season" is over. It gets real when you play your first conference game. Where anyone can give you a game on the road. But Baylor and WV for sure looked good on the road last night.

West Virginia has the type of players that make their full court press very effective. Self better have a plan and practice to combat their press. That 13 won't come easy.

Make the team watch the first half of the 1988 NC game. Key to beating the press is "Make them pay with easy layups" Don't just be satisfied to break the press...

That is an odd score card with all the individual components like front court, back court and bench scoring well but yielded relatively poor performance results in offense (B-) and defense (C).

I thought a "C" for the defense was rather charitable.

while our front court played well, an A given there defense of Viad seems a bit high.

A lot of Vlad's points came not against LL or CB, but against the help defense (guards) that was absent.