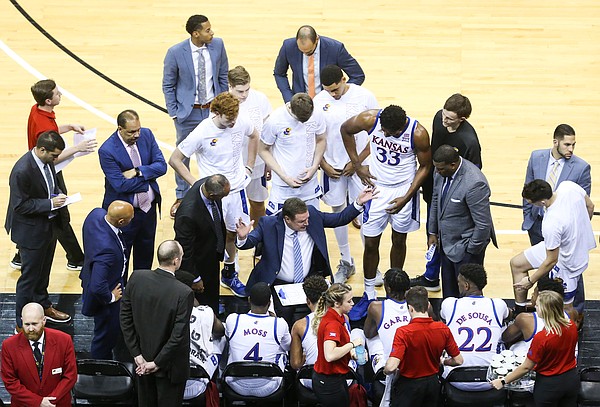 It figures to be a different type of Big 12 race for the Kansas men’s basketball team in 2020, at least compared to the previous 15 years.

After finishing third in the league last year, behind co-champions Kansas State and Texas Tech, KU’s streak of 14 straight Big 12 titles came to an end. So this season will be the first time since the 2004-05 campaign that the Jayhawks didn’t win at least a share of the conference crown the previous year.

“Definitely going into this year, it is different from last year,” sophomore guard Ochai Agbaji said. “We are going to take it game by game, not really focus on what is going on.”

It could mean that there is no pressure for this year’s squad, but No. 3 Kansas (10-2) is the prohibitive favorite to reclaim its spot atop the Big 12 Conference this season.

According to FanDuel’s Sportsbook, KU’s odds to win the league has actually increased since the original odds were released on Nov. 5. The Jayhawks are now +105 to win a 15th league title in Bill Self’s 17th season after opening at +125 in early November.

With Big 12 season starting on Saturday, here is a full look at the updated odds as of Friday:

West Virginia, KU’s opponent for the league opener, was one of the biggest movers from the initial odds. The Mountaineers, who will take on the Jayhawks in Allen Fieldhouse at 3 p.m. Saturday, enter the matchup 11-1 and ranked No. 16 in the country following a 67-59 win over Ohio State.

Baylor, meanwhile, is 10-1 and considered the sixth-best team in the nation via the latest AP poll. No. 22 Texas Tech (9-3) also has a win over then top-ranked Louisville, so the Jayhawks should have a few formidable foes this season.

“When you look at a race like this, you kind of look at consistency because that’s kind of who you are,” Self said. “You also look at what their ceiling is, and there is a lot of teams with high ceilings.”

But projections support the latest odds that the Jayhawks are still the favorite. Ken Pomeroy released his conference simulations in an article on The Athletic earlier this week, which gave Kansas a 75% chance to win at least a share of the Big 12 title. Baylor is at 20%, while West Virginia was listed at 13%.

KenPom’s current projections have the Jayhawks winning the league outright with a 14-4 record in league play. Both Baylor and West Virginia are projected to finish as runners-up with an 11-7 clip.

BartTorvik.com, meanwhile, gives Kansas an even better chance entering league play. KU has an 80.6% chance to share a league title and 67.6% chance to win it outright via his model. Baylor and West Virginia are also KU’s biggest challengers, according to Torvik’s system.

It remains to be seen if KU will reclaim its spot as the top team in the conference come March. But the odds and computer models clearly suggest that the Jayhawks remain the team to beat ahead of this race, even if they are in unfamiliar territory.

“I think the whole team is ready for these games because that’s when the pressure really builds,” sophomore forward David McCormack said. “For all of us, it shows where we stand and where we are as a team.”

As posted on this site earlier, theyve got to improve this n the road. Villanova was not a good sign. Open the season with an L at Allen and those odds will flip significantly. Time to prove it.

agreed Brett.. Plus a loss to puke on the road with 28 t.o.'s. We should've won that one for sure.. People can say what they want about Marcus's shooting, but we need his I.Q. and ball handling. Dotson is just Mason 2.0.