I'm trying to picture the scene on Oct. 15, when the Baylor football team travels to College Station, Texas, to take on Texas A&M.

Complete mayhem, in all likelihood.

Baylor's threat on Wednesday to sue Texas A&M if it left the Big 12 to join the SEC caused a momentary pause in college football realignment, which is beginning to more closely resemble a circus act than a gathering of rational minds that make decisions for the good of the sport.

The SEC agreed to extend an invitation to Texas A&M only if the nine other Big 12 schools waived their rights to pursue litigation against the SEC. Baylor refused. No formal invitation for Texas A&M, at least for now.

Laugh all you want, but I applaud the Bears for sticking up for themselves.

Sure, Baylor isn't Texas or Oklahoma, but can you blame the Bears? Baylor is set to receive between $17 and $20 million in TV revenue starting next year with the Big 12's new TV deal. If Texas A&M peaces out to the SEC, and the Big 12 collapses, Baylor could be left out of a major conference. In this scenario, it's safe to say the Bears wouldn't make between $17 and $20 million in TV revenue, and their plans to renovate Floyd Casey Stadium with some of that money would not be feasible.

Plus, look what happened after Baylor decided to make a stand. Texas, Texas Tech, Oklahoma State, Missouri, Iowa State, Kansas and Kansas State joined the Bears in their refusal. All after Baylor showed a little pride and stood up for itself.

In this every-man-for-himself era of college football realignment, where decency, common sense and tradition are thrown by the wayside, who in their right mind can blame Baylor for wanting the Big 12 to remain intact?

I have no idea what will happen to the Big 12. But I'm confident in saying this: Good for Baylor.

So I hear there are actually games to be played this weekend.

I keep a running tally of picks on Big 12 football games here on the Conference Chatter blog every week. I make two sets of picks, one against the spread, and one straight up. After week 1: 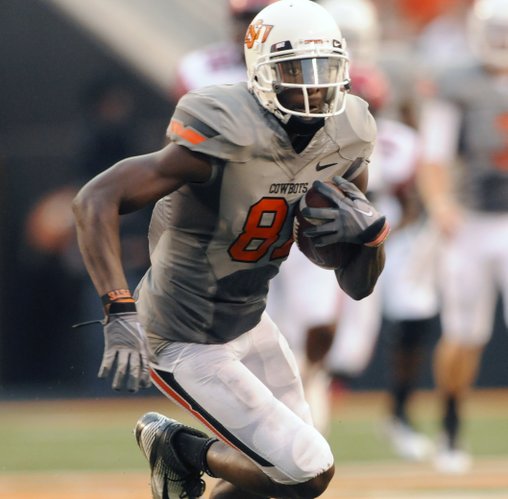 Arizona at No. 9 Oklahoma State, 7 p.m.
Line: Oklahoma State by 13
Pick: vs. line: Arizona; straight up: Oklahoma State
One-line reason: In a rematch of last year's Alamo Bowl (a 36-10 OSU victory), Arizona makes it more respectable, but Justin Blackmon (held without a score last week) finds the end zone once or twice and the Cowboys play just enough D to hold on.

No. 21 Missouri at Arizona State, 9:30 p.m.
Line: Arizona State by 8
Pick: vs. line: Missouri; straight up: Arizona State
One-line reason: I think MU's defense is good enough to keep the Tigers close all game, but it's asking a lot of sophomore quarterback James Franklin to engineer a victory in his first road start against a stout opponent. 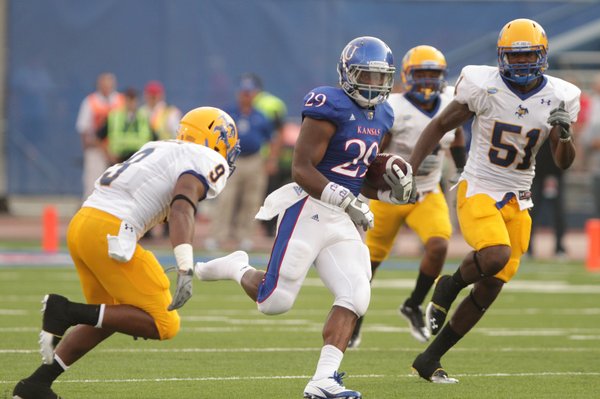 Northern Illinois at Kansas, 6 p.m.
Line: Northern Illinois by 6.5
Pick: vs. line: Kansas; straight up: Northern Illinois
One-line reason: KU's ability to run the ball effectively should keep the game close, but the Jayhawks could struggle against senior dual-threat quarterback Chandler Harnish, who threw for five touchdowns and ran for another against Army last weekend.

I'd love for KU to get out of the B12, but I agree - Good for Baylor. Why do they have to take one for the team? What did A&M ever do besides being located in TX to deserve a Golden Wonka Ticket to the SEC? The only reason the MS schools are in the SEC is because the state is in the middle of the conference. Can't think of anything those schools have ever done to distinguish themselves in any manner.

"Jim Crow" would beg to differ.

Having lived in Houston for the last 20 years, the animosity between Baylor and Aggie fans is more intense than it is between A&M and UT, the Baylor-A&M game is going to be very intense in the stands this year. Could rival KU-MU in basketball.

As for your picks Eric, the only one I would personally change is I would take OSU across the board. If the game was in Tucson, I would like UA to cover, but since it's in Stillwater, I like the Pokes to win big and for them to cover. I just hope OSU doesn't wear those hideous jerseys they were last week.

Nice call on Okie State tonight, sir. I should have taken OSU with the spread as well. On the bright side, they wore the slick black jerseys tonight and not your aforementioned hideous gray ones.

Good job Baylor! I support u! yeah, don't let the big boys push u around. U go Baylor!

Personally, I think Oklahoma is going to end up staying anyway, and if a couple more teams (BYU, SMU, Houston?) get invites, the Big 12 would still be great. I don't think Oklahoma would want to go to a Pac 16 where they would not arguably be "the team" of the conference in football like they are in the Big 12. As far as Baylor goes, I definitely understand the reasoning behind why they did what they did, but I wouldn't say that they are bucking the trend in this "every-man-for-himself" era. If Baylor got invited to the SEC, they certainly would take the invite, just like when they bolted for the Big 12 and didn't think about SMU, TCU, etc in the old SWC. Like you said when mentioning anticipated stadium renovations, the only reason they are doing this is to keep as much money in their pockets as possible.

BYU, TCU, and Houston will get the conference back to 12. But UT has to give up the Longhorn Network to the Conference. It's not selling in Texas anyway. If the UIL had allowed the Network to broadcast high school games, it would be mandated in every cable company package by TX Constitutional decree. If the Longhorn Network were turned into the Big XII Network (I have the Big 10 network as part of the sport package on DISH) and UT drops its boorish demands for more revenue than the other schools, then the Conference comes off life support. Even T. Boone would get behind that idea.

The Big XII will be history by the end of the month. In a landmark change, UT and KU go to the Big Ten.

Missouri ends up with OU/OSU/TTU in the PAC16.

ACC starts with a few Big East Teams, to round out to 16.

Iowa State, Baylor, K-State, TCU end up in the Big East. The Big East adds Memphis to make the 12th team. They consider adding Tulsa, and a few others to round out to 16 football teams. The rest of CUSA merge with the MWC to make that conference 16.

Now with 6 - 16 team conference, everyone gets confused, and they split them all in half. We end up with 12 conferences of 8, and we feel like we are in the 80s again.

I might mess up some other points, but KU wins the NCAA basketball tournament 3 of the next 4 years.

Who cares about the rest.

None of that will happen. KU does not have the academics to be considered by the Big 10. Put down the crack pipe...

I love how people say KU doesn't have the academics, but we are an AAU institution. Hmmmmmm......

You do not know what you are talking about.

KU is an AAU member, and there are only about 60 or so of those in the nation.

Nebraska got booted out of the AAU last year shortly after joining the Big 10 -- only the second school in the 100+ year history of the AAU to be removed.

Without question, KU is better academically than Nebraska. To suggest that KU would not even "be considered" by the Big 10 is just ignorant.

Indiana? Minnesota? Iowa? Nebraska? Purdue? Michigan State?...seems to me like KU would be middle of the pack and belong academically in the Big Ten!!

I think I am going to make a stand and seek a lawsuit against Tam for emotional distress.

They interviewed Pickens during the OSU game, and he said he wants to keep the Big 12. Also said he didn't want to sue, but didn't say anything about signing a waiver. Said OSU and OK are a package. He also said the Big 12 needed an even distribution of funds before everyone would be happy. He said he had visited with the school president about all these things this very afternoon. I don't know that they jump when T. Boone Pickens speaks, but my guess is he has a LOT of influence on the final decision.

Let's hope that such cooler heads prevail. And that UT agrees to start playing fair. To soften the blow, allow UT to come to parity over five years or so. Except the LHN must become the Big XII Network as soon as practical.

Remember T Boone was at the forefront of trying to get Self when Sean Sutton was dismissed from OSU....the very season after we won it all in '08.

"Plus, look what happened after Baylor decided to make a stand. Texas, Texas Tech, Oklahoma State, Missouri, Iowa State, Kansas and Kansas State joined the Bears in their refusal."

This statement is not accurate. Several of the above-listed schools had to clarify earlier today that they weren't on the Baylor bandwagon, because poor fact-checkers like the LJW's kept echoing this nonsense once it got out into the wild.

I agree with you that Baylor deserves a pat on the back for taking a stand. It's interesting that A&M is criticizing Baylor for doing the exact same thing A&M is doing; looking out for themselves.

If the remaining schools want to keep the Big XII conference intact they should start by calling for the resignation of Dan Beebe. Beebe hasn't done anything to help grow the conference. While other conferences are looking to poach Big XII schools Beebe doesn't seem to be making any attempt to attract new schools to the conference.

Despite being top heavy with Texas schools I think it was a mistake not to go after Texas Christian University when Colorado and Nebraska announced they were leaving. I read that before going independent Brigham Young University approached the Big XII about joining, but were turned away. The only approach I've read about that the Big XII has made was to Arkansas and that only recently.

The last couple of years there has been an attempt to create a rivalry between Missouri and Illinois. Why not approach Illinois about joining the Big XII? Granted they don't have the best football team, but they are academically sound. Or how about Iowa if minimizing travel distance is an issue. It is unlikely that either school would leave the Big 10, but aggressively pursuing teams from the other conferences might at least keep the Big XII in the game. It has to be better than doing nothing.

I don't know if Beebe is simply inept, negligent, or incompetent, but the conference needs someone with better leadership qualities than he has displayed.