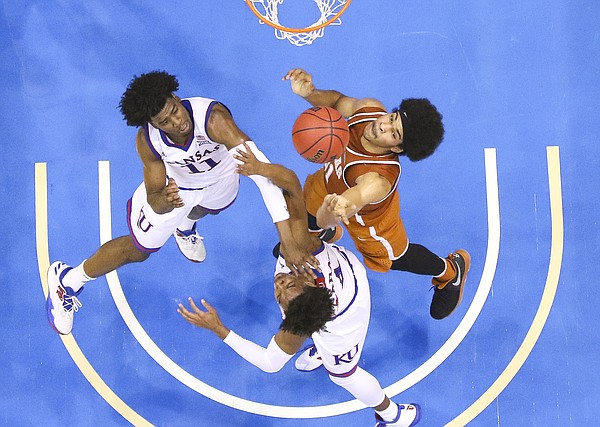 Kansas guard Josh Jackson (11) and Kansas guard Devonte' Graham battle for a rebound with Texas forward Jarrett Allen (31) during the second half, Saturday, Jan. 21, 2017 at Allen Fieldhouse. by Nick Krug

Flashback to last fall and Jarrett Allen was on an official visit to Allen Fieldhouse, envisioning himself playing for the Kansas Jayhawks.

After Saturday, all of the fans in Lawrence were left wondering what could have been. Allen posted the best performance of his young collegiate career during a 79-67 loss to the Jayhawks, leaving everyone in awe of his potential.

“I was really pumped up,” said Allen, who set career highs in points, rebounds and field goals. “The whole team was pumped up. I just fed off everybody’s energy. I mean it’s Kansas — the No. 1 or 2 team in the country. And then playing at Allen Fieldhouse, you just hear rumors about how loud it’s going to be, so I just got excited to play.”

Allen chose the Longhorns over KU and Houston. He didn’t end his recruitment until June and the Jayhawks had plenty of depth in the front court with Landen Lucas, Carlton Bragg, Mitch Lightfoot, Dwight Coleby and Udoka Azubuike.

“Everybody knows now why we wanted him so badly,” Kansas coach Bill Self said. “He’s not only a great college player, but he’ll be a great pro, too.”

Along with playing in the fieldhouse, where he once sat in the crowd, Allen was familiar with Josh Jackson, the top-ranked recruit from his class. He remembered playing against Jackson once on the AAU circuit and they were teammates in the McDonald’s All-American game.

But when the ball tipped in the air to open the game, the 6-foot-11 Allen said he didn’t spend any time thinking about playing against Jackson. The two five-star freshmen even guarded each other at times because of KU’s four-guard lineup.

“In my head, the matchup wasn’t a big thing for me,” Allen said. “I just wanted to go out and play.”

When the Longhorns (7-12, 1-6 Big 12) tried to make a run in the second half, they turned to Allen. He showcased everything in his arsenal. He swished mid-range jumpers. He wasn’t afraid to fight for space in the paint. He scored on put-back attempts.

He’s still thin at 235 pounds, but his star has brightened during Big 12 play. He’s scored at least 17 points in the past four games.

The only thing that stopped him midway through the second half was a leg injury. Allen thinks he landed on another player’s foot going for an offensive rebound. He was helped off of the court by his teammates and had to go to the locker room, but returned with under eight minutes remaining.

“In the second half Jarrett just dominated us,” Self said.

Allen, a Round Rock, Texas native, recorded a double-double in the first half with 10 points and 10 rebounds. That included a buzzer-beating turnaround jumper, cutting UT’s deficit to six points at the intermission.

“That was the Jarrett that I’ve been waiting to see,” Texas freshman guard Andrew Jones said.

Allen, who was averaging 11.9 points and 7.8 rebounds, said the biggest change was playing aggressive — “There’s a difference between playing hard and being aggressive,” he said.

“When you go out there, like during warmups, you just feel the energy of people walking in,” Allen said. “You don’t feel that anywhere else.”

Seems like Allen Field House has a history of making a few stars from the opponents have injuries. Thinking about people like Durant, and didn't Blake Griffen miss a game here? I think Big Country had a marvelous game here, but still lost to Oostertag. Not anything deliberate on KU's part, but the Phog works in mysterious ways sometimes.

Allen would have been a good get .............but he saw the bodies I wouldn't say depth because Lightfoot and Coleby haven't been a factor and little did we know that Bragg would be stuck in neutral at this point in the season. Allen traded losses for the chance to get major minutes on a not so good Texas squad but the kid can play and would have loved to have gotten him

Third time in recent years (Marcus Smart, Myles Turner, and now Jared Allen) we missed on a key recruit needed to make us a complete team. I'll never understand why guys like them would chose to play their limited collegiate time with a program going nowhere (UT this year will finish near last in the conference and won't even make the NIT) rather than starring at Kansas winning conference and going deep into the NCAA Tournament.

As much energy as Allen felt, it's strange that it seemed to have the opposite effect on Jackson. Jackson put up decent numbers but really had a bad low energy game and seemed to have little interest. Jackson's defensive effort, inability to focus on easy scoring plays (severally ally-ops) and lazy turnovers was extremely disappointing.

I love the energy that Jackson brings to this team. I'm not sure why you criticized him. He's put up the most blocks in our team. More than total 4 bigs combined. His got undercut on his way to catch an almost impossible lob - thanks to Mason who still has not figured out how to throw a lob yet. Vick's effort to lob to him was a pass to a Texan, instead. Please don't call those turnovers lazy. He sprinted back after realizing he made a mistake. Anybody in our team has done it before and we'll see more of that against athletic teams.

I think you need to have another look at the tape. Jackson did some good things for sure but he did a heck of a lot of bad stuff as well.

I think Jackson's previous technicals have made him afraid of being too demonstrative on the court. I suspect the energy and passion are still there, but he is just trying very hard to contain it. A casual observer could say that about Mason, but we know it's not true.