Clutch basket by David McCormack helps No. 6 Kansas hold off Oklahoma for 63-59 win

Consider Kansas forward David McCormack having been in the right spot, both on the court and on the roster, to deliver one of the biggest shots of Saturday’s 63-59 Kansas victory over Oklahoma.

Shortly after the sixth-ranked Jayhawks survived a scare from the Sooners at Allen Fieldhouse, KU coach Bill Self said McCormack’s bucket in the paint that put Kansas up four with 10 seconds to play was one of those that should always be available.

Of course, McCormack still has to execute when the opportunity arrives. And he did on Saturday. But the fact that he was a secondary option on that set out of a KU timeout only underscores Self’s point.

“If you play right and play the way we'd want to play, I really believe that there's a great chance that whoever's in there playing in the big spot is always an option,” Self said. “You should always be able to throw the ball to your big.”

The Jayhawks did that repeatedly on Saturday and McCormack delivered with a team-high 17 points on 8-of-14 shooting from the floor.

“I’m playing with a free heart, free mind, just doing what I can to help help the team win and playing with energy,” McCormack said. “That’s all I can say.” 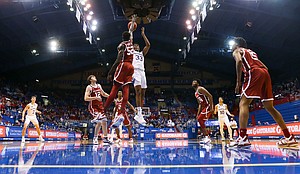 Twice in the game’s final 2:30, McCormack caught the ball in the post and went to work to get a crucial basket. The first put Kansas up 58-57 with 2:19 to play. And the second was the one that put it out of reach for OU.

The fact that McCormack delivered validates what so many of his teammates and coaches said he was capable of before the season began. The fact that both baskets came just a few minutes after he airballed a hook shot from a similar spot on the floor speaks to McCormack’s ability to move on from a mistake and stay ready to deliver.

“He made two of the biggest plays of the game without question,” Self said.

After the second, McCormack pumped his fist near the free throw line and let out a roar of approval. His teammates were hardly surprised.

“I know he's always going to have some kind of reaction after after a big bucket,” junior guard Ochai Agbaji said after Saturday’s victory. “But that's good. That's just great energy for us.”

When asked after the game what McCormack did for the Jayhawks (10-2 overall, 4-1 Big 12) on Saturday, Agbaji needed just a single word to answer.

It wasn’t all praise for McCormack on Saturday. Despite his key contribution to KU’s latest victory, he and reserve forward Mitch Lightfoot combined for just one rebound in the 40 minutes they played.

It’s hard to get too excited when your two bigs play 40 minutes and combine for one rebound,” Self said. “So we’ve got to do a better job of that. But I thought (McCormack) played well. I’m happy for him.”

Proving that this is a team full of players who are happy to have each other’s backs, Jalen Wilson stepped up with 11 rebounds, Christian Braun grabbed nine and Agbaji recorded six, as well.

“Coach always says that real teams grow as the season goes on,” McCormack said. “And that's definitely what we're doing. We know how each other plays, now we just have to play to our strengths and play how coach wants us to play and get into a groove.”

That last part took a while in this one. For the second consecutive Saturday, the Jayhawks came out flat. OU (6-4, 2-3) opened up a 9-2 run and led 15-9 before the Jayhawks found a pick-me-up in the form of their halfcourt defense.

KU’s ability to get stops on one end led directly to smoother offense on the other. 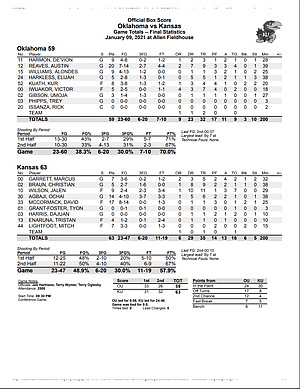 Lightfoot (7 points on 3-of-3 shooting) scored twice in the post. Agbaji (14 points), Braun (5 points) and senior point guard Marcus Garrett (7 points, 5 rebounds, 4 assists) all got to the rim off the dribble.

And Lightfoot’s tough bucket down low with 10:56 to play in the first half, along with two Tristan Enaruna free throws, pushed KU’s first first-half run to 9-0 and gave Kansas a 20-15 lead.

OU quickly responded with a 7-0 run of its own to go back in front. And the two teams went back and forth with the lead the rest of the half.

“I thought we absolutely stunk the first half,” Self said.

A 10-3 run by Kansas to open the second half put the Jayhawks back in front and in control. And a pair of Agbaji 3-pointers and another tough bucket by Lightfoot in the paint, pushed the run to 15-6 and gave the Jayhawks their largest lead of the day to that point, 46-39 with 14:02 to play.

The Jayhawks never could pull away from there. OU tied the game at 49 with 7:03 to play, setting the stage for the nip-and-tuck finish.

The Sooners, who shot 38% for the game, missed five shots to take the lead late in the game before Umoja Gibson’s 3-pointer from the corner finally put OU ahead, 55-54 with 3:43 to play.

That set the table for McCormack, Garrett and Wilson to deliver four clutch baskets in the final 200 seconds, with Garrett’s left-handed driving reverse layup with 3:13 to play carrying the highest degree of difficulty.

Wilson’s 3-pointer with 1:28 to play put Kansas up four, keeping OU just far enough away at a crucial point in the game.

All of those baskets required high-level individual and team execution. And Self said the fact that the Jayhawks delivered left him feeling good about their overall performance, considering KU gifted OU with so many easy baskets, many coming off of Oklahoma’s 10 steals or KU’s distracted half-court defense.

“It's a pretty good win, considering they got (some) easy stuff and we didn't,” Self said.

Next up, Kansas travels to Stillwater, Okla., to face Oklahoma State at 7 p.m. Tuesday on Big 12 Now/ESPN+.

Our wings did the rebounding (of lots of long bricks). KU out-rebounded OU. Not the problem today; bad offense was the problem.

1] As odd as it sounds, I'm I off in feeling that a team that is 10-2 and is ranked sixth in the Nation still appears to be a bit over-rated?

2] One rebound from the center position.....amazing!! You'd think you would get at least a couple just by accident.

4] Paper cut outs in the stands, everyone wearing masks, no handshakes or high fives. What universe is this?

5] Damn, it looks like Kentucky is starting to get a clue. Still, we've gained six games on them.

6] Anything shaking with the NCAA or will it be all hands on deck to max out the cash lost last year???

Such gloomy but true thoughts, Tony. And, I think you left out the fact that OU was without their 2nd leading scorer. We won, fortunately.

To answer your question in #4, we are in a dystopian universe run by liberals who think government has the answers to everything and that peasants such as us should shut up and do as they tell us.

This is just the beginning... those masks = censorship.

This being a CBS game, I was able to livestream it on my laptop. It was such a maddening game to watch, and I yelled myself hoarse throughout the game.

Despite the final score being in Kansas' favor, I am really disappointed in the Jayhawks' overall performance. You would think that a KU team that got its ass whipped at home the week before by Texas would want to put up a better showing its next time out at home. But there were long stretches, and especially in the first half, where Kansas looked just flat-out disinterested in the proceedings. They had way too many defensive breakdowns - how many baskets did KU give up to OU on backdoor cuts? The lack of communication amongst the players is deeply concerning - where is the on-court leadership for this team?

I'm more relieved than happy for the KU victory, because, based on what I saw, the better-prepared team did not win today.

1) We were down by 7 points early. Do you know how we came back? Garrett sat on the bench.

2) McCormack is such a strange player. 1 rebound? Really? We still went -7 with him on the floor (and +6 with Lightfoot). I am just not sure what role he is supposed to play on the team. Obviously he can be a great player at times. But what is he? The same is true for Garrett.

3) OU played a great game. They had long stretches of suffocating defense that we had no answer for. I hope our players learn from this one.

4) We seem to be a team that lives or dies by the 3 point shot. That's great when it goes our way, but scary when the shots don't fall.

6) I wish Texas had lost to WVU yesterday.

7) Winning ugly is ok. It means that the team competes no matter what. It means they have a winning mindset and culture. I wish we would have won by 12 points, but this team is tough and fights and wins.

It is clear this is not a great team (at least yet), but to their credit they continue to gut out wins. Agbaji and Wilson have been wonderful and I like Harris and Enaruna (and the hard working Mitch) off the bench. Braun is a true grinder and the defense goes as does Garrett. This team reminds me a bit of the 2018-2019 team that “broke the streak”. When Vick was sent packing and Udoka went down with an injury the dominant rim protector was gone, and KU was only good. Dedric Lawson (19/11/2) was an offensive presences and a good rebound but struggled defensively to replace Dok’s size and most importantly ability to intimidate players from driving. David is clearly a superior shooter as compared to Udoka, but he does not really scare the opposing players from driving to the basket. To his credit, he made some crucial baskets last night or they would have lost their second home game in a row. If KU finishing 3rd in Big 12 and in the top 15 in the country, Self will have done an admirable job, especially in these trying times to keep the players engaged and SARS-CoV-2 free. As becoming evident, if KU struggles hitting 3’s (Texas, OU, etc.) then the defense has to be stellar to eek out ugly wins, an art mastered by many of Self’s teams. Live or die by the 3, might be the fate of this year’s team. Rock Chalk.

I'm excited about this forthcoming big:

Sydney Curry at John A Logan college is gonna be a big problem this year! @Bigticket_sc @LoganVolsBBall pic.twitter.com/U5gMaRZOqo

A lefty big with a powerful force. Guy can go straight to the NBA. I hope there's no drama on this one.

Hey Bryce, who has controlled the WH and Senate for four years? Don’t bother answering, you are too stupid to figure it out.

And Benjamin, ask Tony how original your format is.

Thanks Brett! Tony and I discussed it last year actually. There's nothing new under the sun. It's good to see you around. Have a great day.