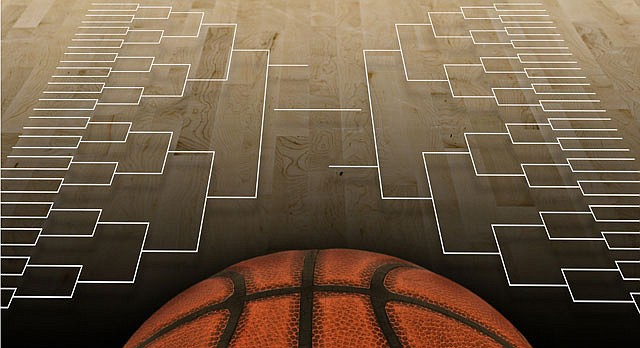 That could be the rallying cry for everyone who plays men's Division I college basketball this season now that the NCAA has announced it is in talks with city and state officials to host the entire 2021 NCAA Tournament in Indianapolis.

Nothing is official yet — NCAA officials told reporters on Monday that preliminary discussions have taken place solely with Indianapolis but other cities are on the list if needed — but NCAA leaders have been eyeing the idea of creating a bubble-like environment for their signature postseason event for months.

If Indianapolis and gyms in surrounding areas do end up hosting the whole thing this season, that would replace 13 previously scheduled NCAA Tournament sites, including Wichita, for first- and second-round games in the Midwest region, for the upcoming tourney.

“My committee colleagues and I did not come lightly to the difficult decision to relocate the preliminary rounds of the 2021 tournament, as we understand the disappointment 13 communities will feel to miss out on being part of March Madness next year,” Chair of the Division I Men’s Basketball Committee, Mitch Barnhart said in a news release.

The four regional sites that would miss out were Denver (West), Minneapolis (Midwest), Brooklyn, N.Y. (East) and Memphis (South).

None of those 12 sites is scheduled to host their respective events until 2024 at the earliest, with more than half of them slated for a return in 2025 or 2026.

According to the announcement, the decision to pursue Indianapolis as a single NCAA Tournament site was made with safety as the top priority.

In addition to Bankers Life Fieldhouse, which has hosted the Champions Classic and is home to the Indiana Pacers, and Lucas Oil Stadium, which was scheduled to host the 2021 Final Four in the first place, there are 10 Division I basketball programs with arenas in the state of Indiana.

Two of them (Butler and IUPUI) are in Indianapolis. Four more (Ball State, Indiana, Indiana State and Purdue) are within 75 miles of Indianapolis. And four others (Evansville, Notre Dame, Purdue-Fort Wayne and Valpo) sit 125-175 miles outside of Indianapolis.

The committee emphasized the importance of limiting travel and conducting the tournament in a safe and controlled environment.

“These principles have guided the decision-making process as we continue to assess how to have a fair and safe championship experience,” NCAA President Mark Emmert said in a statement.

Added Dan Gavitt, NCAA Senior Vice President of Basketball: “We have learned so much from monitoring other successful sporting events in the last several months, and it became clear it’s not feasible to manage this complex championship in so many different states with the challenges presented by the pandemic. However, we are developing a solid plan to present a safe, responsible and fantastic March Madness tournament unlike any other we’ve experienced.”

The NCAA’s release said Monday that CBS Sports and Turner Sports will continue to distribute all 67 games of the tournament across TBS, CBS, TNT and truTV and their digital platforms.

Why of course they are. How much easier can it be having it right in your own backyard.

Probably has a lot to do with the infrastructure here in Indy. It is known as the Convention Capital of the world. The city does great work with putting on huge events and before Covid hit, there was something major nearly every week. I'm quite stoked about this news!

Indianapolis would be about 20th on the list of actual places to hold the tournament. It’s a Midwestern sh*thole occupied by a large collection of the worst people in America.

Florida isn’t much better but, here’s something you might now know, they have recently gained experience in hosting high level basketball competitions.

If we all woke up tomorrow and Indianapolis didn’t exist, no one would care.

Here’s where to hold your tournament: Vegas Vegas Los Angeles (the place where they hosted the Olympics) No other place.

You must live in Indianapolis then (I know you don't but by the description you HAVE TO live there, otherwise your description isn't true).

All sparkly as usual, BM!!

His initials are the same as those for "Bowel Movement". Which is fitting, because every time he leaves a comment on a basketball article, he has a verbal bowel movement.

Having been to several Final Fours, I can say that no city hosts that event as well as San Antonio. The venue is great and it is walking distance from the hotels, etc. The River Walk is a perfect gathering place for fans and having the parade on the river is very cool. Of course, that is a single, long weekend event with just 4 teams and their fans.

Hosting the entire 3+ week tournament with 64 (68) teams is a whole other ballgame. Playing 16 games in a single day (Round 1) requires 8-10 venues, If the desire is to create a central location for the fans within driving distance to the venues, I can't think of a city other than Indy with that capacity within a reasonable driving distance. Vegas could adapt some venues to make them work, but not well. Besides, COVID will probably shut Vegas down again before then. LA, NY, Philly, etc. are not the right kind of environment to host something like this. They just don't have a gathering place with easy access to the venues needed to host the games. KC's Power & Light District would be cool, but again they don't have the venues to host so many games. I think Indy is a reasonable first option and it's somewhat centrally located.

On a related note, if all 68 teams go into the bubble for a week or more beforehand and stay until they are eliminated, what about classes. Some of the players are actually student athletes. I know when I was in school, the players would come back to Lawrence between rounds and have to catch up on school work before heading out again on Wed/Thurs. Just curious how that will play out.