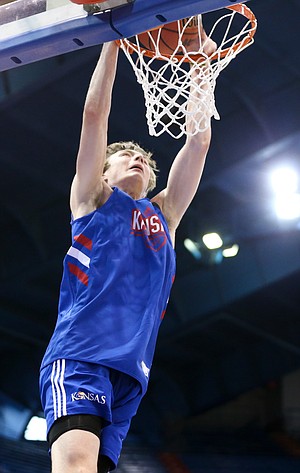 Braun will start at 2 or 3 at some point this season. The dude can really play!

Maaaaan, I can't wait to see this team in action!!! https://daysuntillatenight.com/

So Braun brings a lot of "brawn" to the court.

Someone had to say it.

According to a close family member, it's pronounced like "Brown."

Seems like just a few weeks ago, everybody was saying Coaches couldn't recruit, the sky was falling. Fact is he who laughs last laughs best. Our recruiting is solid this year. Not only for next year, but we have set the plate for 2 and 3 years down the road.

Braun and McBride are both gonna come up big this year. Our first five, say, Doke, Dotson Ochai, Silvio, and Garrett, our second five, McCormick, Wilson, Braun, McBride and Lightfoot, and that does not even include Moss and Enaruna, that's 12 deep baby.

So I'll be danged, seems like we will have a basketball team after all. I thought we might have to drop the sport.

The sky will be falling all right....on our opponents heads!!! :)

wow, what a great attitude!