It’s been a long time since the Kansas football team put together an offensive line that consistently gave its quarterback ample time to survey the field and its running backs reliable paths to chunks of yardage. 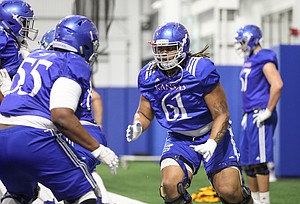 The linemen all will all have to prove their head coach right in games this coming fall, but Miles credited O-line coach Luke Meadows for prepping them during the past several months and putting them in a position where Miles expects them to be able to execute.

“I think Luke’s done a really good job,” Miles said of Meadows, “kind of molding the line and getting the different pieces — pass protection, the different style of blitzes that can befall you — and putting that line together.”

Adeniji, who has started all 36 games of his career heading into his senior season, explained how Meadows’ approach helped a veteran group of O-linemen make progress.

“He’s real straightforward. He’s a smart guy. Really, he’s a football junkie,” Adeniji shared. “He just really wants us to get honed in on our technique and things like that.”

Adeniji attests that all of the players in his position group made important strides during the spring, with Meadows’ help. Pressed to single out the lineman who developed the most, Adeniji pointed to KU’s new likely starting center, Mane.

“We threw him in there at center and he’s doing a fantastic job,” Adeniji said. “Especially with everything we’ve had to learn and improve. He’s done a really fantastic job and I’m excited to see what he does come the fall.”

The KU roster now lists 17 players on the offensive line, following a recent switch for redshirt junior Reuben Lewis (6-4, 325), who has joined the defensive line group. As bullish as Miles seems to be about the O-line, he also expects to see improvement from the unit between now and the Aug. 31 season opener versus Indiana State.

“I think our line’s going to be good. Again, it takes time,” Miles said.

In total, from KU’s first preseason practice this past Friday to its final camp session on Aug. 25, the Jayhawks will practice 19 times. Not only does Miles expect fatigue to accompany that schedule for his offensive linemen — and all of the players, really — but he wants them to experience some level of weariness through it all, because he trusts that will be an important piece in their growth as players.

If the head coach is right and KU’s offensive line finally is an advantage for a change instead of a liability, the men doing the blocking plan on celebrating long runs with not only sophomore Pooka Williams, but also senior Khalil Herbert and junior Dom Williams.

Adeniji said on some teams when the No. 1 rusher gets worn down, a backup comes in and the run game ceases to be a threat. This KU backfield, though, the senior left tackle added, isn’t like that.

“We’ve got three guys that can flat out go,” Adeniji said of the running backs. “We love that (as O-linemen), because if we’re running the ball and having success we can just keep going and keep going and wear teams down.”

Well to take the phrase - -the word " HOGS " - -if ours can protect/open those holes we can do some damage. - -They give the QB time I think our receivers might be a little over looked not given enough respect - -think we might surprise some people with new blood coming in.

I remember the days of Coach Mason Hawk Talk radio show days consistently talking about getting the OL and DL to the point of when walking through an airport that everyone knew who th Big Ole Lineman were.

Yes Michael, and a boy named Gilbert some thing was his prime specimen from DETROIT I believe. Didn’t he go on to play for Green Bay?

I’m really intrigued to see Les Miles during the season because his entire off-season has been spent publicly praising the kids in the program, the school, the campus, everything. He constantly compliments his players and his roster and it never “reads” as insincere. I’d be interested in knowing from reporters who covered him at LSU whether this is what they saw while he was there?

There are going to be some tough times this season, and I have a feeling that this team, under a real leader, will bond and fight through.

Though the article is about the OL, it’s also real encouraging to hear that Rueben has switched to DT. Definitely a bigger need and hopefully something that works out well for him as well.

In spite of myself, these types of articles get me fired up. But let's face it, we've seen plenty of articles like this every year. Let's see how much it translates into actual results.

I give Miles a ton of credibility here, having played in the trenches at Michigan and having coached this group. It will be fun to watch. Our oline play has been the weakest link and contributed to our QB issues. I love the fact that we have three 300-pound freshmen. If we are unstoppable on offense, have few penalties, rare are the dropped passes, this changes everything. Long drives that eat clock in the scheme of things mean any game is within reach.