Lil Yachty performs at the 33rd-annual Late Night in the Phog on Saturday, Sept. 30, 2017 at Allen Fieldhouse.

Kansas basketball coach Bill Self made no attempt to hide his feelings about the performance turned in by Grammy-nominated rap artist Lil Yachty during Saturday night’s 33rd-annual Late Night in the Phog at Allen Fieldhouse.

“It’s a little long for me,” Self said of the Late Night spectacle on the whole. “But I admit, I’m a Lil Yachty fan. I’m gonna join his fan club and sign up. I thought that was good. Of course, I’ve never heard of any of the songs, but, obviously, the students know them.”

Asked exactly how one goes about joining the Lil Yachty fan club — outside of simply becoming the latest among his more than 2 million Twitter followers — Self even had an answer for that.

“I’ll get with his manager later on and figure out how to do that,” he joked.

All kidding aside, nothing about Lil Yachty’s five-song, 15-minute performance was viewed as a joke by the vast majority of people in attendance at Late Night, who hung on his every word and rocked when he commanded the mic.

“Lil Yachty, I think he was great,” said KU senior Devonte’ Graham, merely confirming what the 16,300 fans in attendance could see with their own eyes throughout Yachty’s performance. “He had the crowd hype and I heard he was performing somewhere after this, too.”

When told that place was The Granada in Downtown Lawrence, Graham, like his coach, showed some love for the artist formerly known as Miles Parks McCollum. 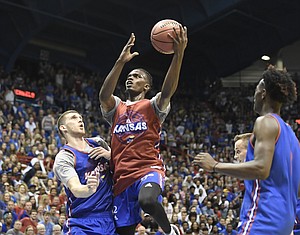 Although KU director of operations Brennan Bechard fell short of making it three years in a row on his half-court shot that would have cost KU coach Bill Self another $10,000, (his shot this year missed long and wide right) there was a surprise guest who attempted the other half-court shot that took a little sting off of Bechard’s miss.

After Tweeting Friday that Kansas fans should be on the look out for a surprise, Chalmers grabbed current Memphis Grizzlies teammates Ben McLemore and Wayne Selden Jr., and returned to Lawrence for Late Night. One problem. Self was unaware all three were coming. After announcing that Chalmers “wanted to be here,” while introducing McLemore and Selden, Self was shocked when he saw Chalmers emerge from the shadows and join him at mid-court.

“I thought he was coming and then we were told today that he wasn’t coming, it was just Wayne and Ben. So I had no idea that he was there,” Self said.

Chalmers’ presence nearly cost Self the money, as his first attempt at the half-court shot rimmed out and his second fell just short off the front iron.

The always-savvy Kansas basketball fans proved they were well aware of one of Saturday’s main attractions. As nearly two dozen prospects from all classes — most in attendance on unofficial visits — made their way to their seats behind the Kansas bench, the KU students quickly became restless and started screaming chants of “We want Zion” when they realized the 6-foot-7, 230-pound forward from Spartanburg, South Carolina, and No. 2-ranked player in the 2018 class, had not yet made his way to his seat.

Moments later, with recent 2018 KU commitment David McCormack by his side, Williamson emerged from the tunnel and waved to the KU fans with a huge smile on his face. 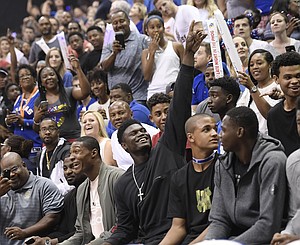 Kansas basketball recruit Zion Williamson waves to the crowd after they started chanting his name during the 33rd-annual Late Night in the Phog on Saturday, Sept. 30, 2017 at Allen Fieldhouse.

Among the many skits that were played on the video board during this year’s event were movie spoofs of scenes from “Remember the Titans” and “The Wolf of Wall Street,” which Self said was his favorite movie, along with a full-on dance battle between members of the KU men’s basketball team and Rock Chalk Dancers.

“Marketing told us what they wanted to do and we just did the film,” Graham said. “The one we did in the locker room, singing, was by far the funniest.”

During that one, the Jayhawks appeared in a locker-room setting and acted out “momma jokes” a la Herman Boone’s team in Remember the Titans. As in the movie, the team finished the session with a rendition of Marvin Gaye and Tammi Terrell’s “Ain’t No Mountain High Enough.” 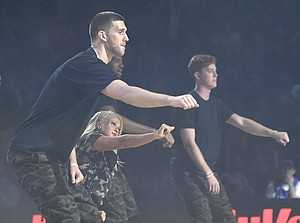 Kansas senior guard Svi Mykhailiuk dances at the 33rd-annual Late Night in the Phog on Saturday, Sept. 30, 2017 at Allen Fieldhouse.

After showing off their moves and engaging in a close-quarters confrontation near mid-court — at one point, the members of Team KU turned their backs while Team Camouflage danced — the two sides were separated and went back to their respective corners.

But like the scrimmage that capped the night, which ended in a 45-all tie, the dance battle also ended in a tie, with neither team being declared the winner.

So I am admitting that I underestimated Lil Yachtys appeal. He actually put on a better show than I expected. There was enough bass in his music to drown out the pitchiness of his voice. Crowd loved him and sang with him. The video after the recruits entered was AWESOME! Thought that alone would grab the attention of multiple recruits. Lots of proud moments.Thought they needed more skits and less group dancing. Overall a fun time and can't wait to see which recruit may make decision this week. RCJH!

Hey Matt--it's Spartanburg. Just a clarification for when he commits and arrives on campus. :D It's down the road from Black Mountain, NC, where I came to KU from in '92...along with another well known KUBB figurehead just prior.

Just fixed it online. Thanks!

So which idiot in the Zenger/.ESPN clown car is responsible for the blackout fail of the scrimmage and the amateur hour production last night. I live out of state and was so stoked to see the late nite scrimmage. What we got was 2 plus hours of bad interviews , a few entertaining minutes of Devonte , and no video of the scrimmage at all. "Your event has ended".

Why is it that the AD treats this program likes its a high school instead of the top program in the country. We have contracts with a failing sports network who hasn't mastered the stream as yet , and then the annual number of games on an unwatchable network. Seriously , Chancellor take note , this crap happens every year.

And honestly the AD does not care one iota about this. Not every KU fan is in Lawrence nor do they have mega income to but season ticks.

Self said the program ran long, so I'm guessing ESPN had allotted a certain amount of time, and when it had expired the coverage was over. I'm not sure Zenger is responsible for that, but he is responsible for the TimeWarner contract which I always blame for everything.

The football team hasnt been showing up to late nite. Anybody have a clue as to why? Is it bad advertising in front of our recruits? Somebody in the know?