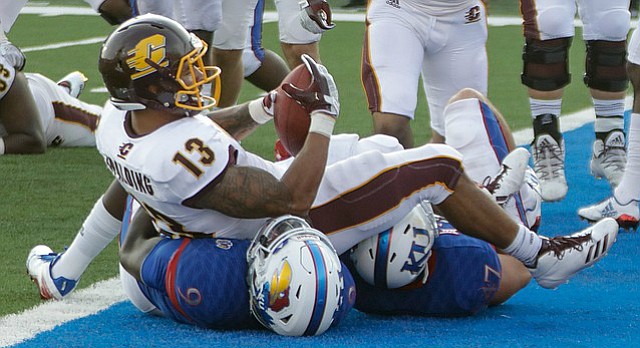 It didn’t feel like just one loss, even though that’s what the record shows. Kansas lost more than a football game Saturday in coming up way short against Central Michigan, 45-27.

The football program lost the faith of a fan base that wanted to believe that the darkest days were in the past and the program was on the rise.

It must have felt like more than one loss to the players as well, based on the comments of one of the team’s captains, junior linebacker Joe Dineen, after the game.

Staying motivated isn’t a common Week 3 concern, but it surfaced because Kansas looked so overmatched on defense and offense against what on paper shaped up as the second-weakest team on the 12-game schedule.

Surely, there are no shortage of motivators for the Jayhawks heading into Saturday’s 11 a.m. kickoff in Athens against Ohio University, which is coming off a 44-21 drubbing at the hands of Purdue.

Given that Kansas has been turned into roadkill every time it leaves Lawrence for so many years the road would seem as if it should be the last place the team would want to head. But Saturday’s beating cast such a pall over Memorial Stadium, virtually empty by the final stages of the game, that spending a Saturday elsewhere amounts to a welcome change of scenery.

Removing the stink of defeat from Saturday’s disappointment should be motivation enough to bring a better effort, but it’s far from the only driving force.

KU’s road losing streak of 41 games, which doesn’t include three losses to Missouri at Arrowhead Stadium, is the second-longest in history. Western State, located in Gunnison, Colorado, lost 44 in a row on the road from 1926-36.

If Kansas can pull out a victory in Athens, Ames or Fort Worth, then it stays in second place in the futility standings and nobody remembers who finishes second. If it can’t and wins in Austin, then it must share the record with Western State. Lose all four and the record is KU’s alone.

Putting that streak to bed Saturday won’t restore all the faith in the future that faded away as Saturday’s familiar-looking loss droned on, but it at least would serve as a fresh start of sorts.

And not be in a Power 5 conference? Are you kidding?

That's the only reason I have for not seeing KU football dropped to an FCS school. We would lose too much money that pays for other sports.

I think that is exactly the point. KU's sports administration has no financial incentive to be better at football. We are in a Power 5 conference, so the money keeps rolling in, even if we are terrible. If this were European "football" KU would be relegated and never get out of the FCS! My guess is that an independent investigation of our football program would find that it is a comedy of incompetence. Being competitive in football is not brain surgery or rocket science. Looking at Rivals recruiting over the past 5 years or so, we are getting the same kinds of athletes as Iowa State, Texas Tech, K-State, but the coaching does not appear to be competitive. Geography does not help. K-State would be awful except for Snyder's genius. Nebraska has been just OK since Osborne retired. We have to go far afield to get talented recruits, and despite Lawrence being an awesome place it is hardly a football hotbed. OK, enough ranting!

I think that photo above pretty much sums it up.

THAT'S what motivates this team? Ending road losing streak? I'm glad we got winning on at home out of the way.

How about beating FCS schools?

Being competitive against BIG 12 schools?

Having a winning record?

Personal pride in playing their best?

How many times over the previous seven seasons have we seen a headline like this?

When Zenger and Beaty get their extensions announced?

Lord knows it has been like 2 months since the last one.

It sucks that we can't even with the 3 out of conference games. I was hoping we would sweep those and pick up two conference wins. this is so frustrating.

Of all the losses in the last 8 years this has been the most heart breaking and painful of all of them. And what's even more depressing as fans is our starting LB is talking about how he needs to keep our guys motivated. If they aren't motivated every single day they step on that field whether it's practice or a game, then I think we just found our problem with this program. They're doing what they love and getting a free education out of it. We don't need guys that are just going to take advantage of that and boo hoo all the way to the finish line. Beaty needs to step up and show some tough love. Call out Bowen for the poor defensive scheme and call out Meacham for making moronic play calls. Then call out Dorance and Wise for not doing their jobs when the guy lined up across from them is a tenth of what they are. And then call out the CB's for playing like they've never played a down of football before and getting burned by guys that couldn't even make our team. And then call out our offensive line for letting the defense bully them all game. And finally, call out Bender for being a coward and throwing like a highschool backup QB that just took over the game for the starter. I'm tired of Beaty being Mr Nice guy. It's time to show these guys what the real world is about.

Do you think the team has given up on the coaches or has the losing atmosphere surrounding the program reached the point where the players are just going through the motions? Or one of the million other possibilities?

At this point I really shouldn't be surprised when the football team ends up being as terrible as always. But, for some silly reason, every year, I still end up surprised and greatly disappointed.

Here's to hoping a couple more wins come the way of the Jayhawks this season...

If history is any solution, look at coaches who succeeded at KU, Mangino, and Mason, so first our new coach should have a last name that begins with M. Second, he should come either from the MAC (Mason), or have been a top assistant at Oklahoma, and Kansas State. (Mangino)

But seriously, the one thing they both had in common, is no gimmiks. Football is essentially a simply game, you have to find a way to consistenly score more points than your opponent. Duh. Field position, the clock are two of your best friends, especially when you don't have the greatest talent,but guess what, Alabama, Oklahoma and Ohio State, all use them, just watch the games they play.

Perhaps the most important thing you have to do to win at KU, is you have to really understand the strengths and weaknesses of your players, and then create opportunities that maximize strengths and minimize their weaknesses. One of the very best examples of this is Ara Parsegian when he came to a Notre Dame team that was pitiful. He simply looked at the skills of his players, and he crafted an offense around them, not the other way around.

Perhaps the most important quality in a player or a person, for that matter, is the fight in the dog. Speed is critical, strength is fundamental, but guts, determination, and pride are essential. What we are faced with now, is the question of sustainability, even of mediocrity. It is hard for me to understand why we looked so overmatched against Central Michigan, it is truly not that we lost, but how we lost. In short we looked LOST. The football program is breaking our hearts over and over, yet we stll keep going out with the same girl.

Just for one year no matter how bad the team is, I would like to see the stands filled every game. And the fans stay till the end, no matter how we stink. I guarantee we would get some very good players, but it won't happen, more likely is an empty stadium. How empty does it have to get before...?

Great Post! I would also like to see a fan base that puts in effort. I go to every home game and it is sad when the fans cheer more for the free pizza than the team on the field.

I cant predict the final score of the game, and if I were forced to bet money Id bet on Ohio. But I still expect more effort and intensity from the 'Hawks this Saturday.

My prediction is KU will win Sat. and break this losing streak! Why? #1 - I will be at Peden Stadium. #2- KU's players are tired of hearing about this! Rock Chalk!

Against all logic, I also feel an upset coming

And hopefully not just my stomach