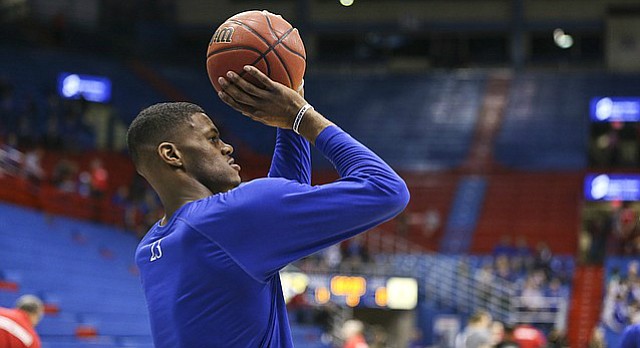 Kansas forward Billy Preston (23) puts up a shot during warmups prior to tipoff against Fort Hays State, Tuesday, Nov. 7, 2017 at Allen Fieldhouse.

Chicago — For the second consecutive game, Kansas freshman Billy Preston will not suit up for the Jayhawks during Tuesday's Champions Classic clash with Kentucky at United Center.

Preston, who missed KU's season opener last Friday to serve a one-game suspension after missing curfew and class leading up to the game, will be held out of tonight's game because of a traffic accident over the weekend.

Self said Sunday that Preston would play against Kentucky, but that was before details of the latest incident reached his desk.

“On Saturday, Billy was involved in a single-vehicle incident on campus,” KU coach Bill Self said in a statement released about an hour before tipoff. “There were no injuries but Billy's car sustained damage. After I learned about the incident, I reported it to our administration. The administration determined that we needed a clearer financial picture specific to the vehicle (so) we decided to hold him out of tonight's game and will continue to do that until the review is complete.”

Self said Preston was told he would not play against the Wildcats before Tuesday's pregame meal.

“Needless to say, he was disappointed and crushed,” Self said. “He was very excited to make his KU debut. We hope to have the situation resolved as soon as possible.”

Preston's absence again leaves the Jayhawks with just seven scholarship players available for Tuesday's game, only two of whom are big men.

A clearer financial picture specific to the vehicle... what the eff does that even mean?? It was a single car accident. This smells like something bigger. Was he drunk? Was it a stolen car?

A clearer financial picture means they're looking at who owns the vehicle and possible NCAA violations attached to the vehicle.

More so, who does the car belong to and why did he have it.

Beginning to look like he is picking up where Carlton Bragg left off. Again, for the majority of those who thought his first suspension was no big deal, Preston needs to consider how he is costing his team. The part of the team that has no depth and he is suspended again.

um, don't be ignorant. he isn't another guy that you don't know. this happened on the weekend. it's likely related to the same suspension. an accident your frosh year in lawrence is almost guaranteed, even if you're from kansas area.

man that has to bite at him. to not be able to play against kentucky? learn buddy, no more mistakes. you don't need a car, it seems to be the source of all problems fresh year at ku.

Sounds like the car might have the potential to affect his eligibility. Self does not want to have to forfeit any wins.

Send him on his way, another problem child. Instead of distracting the entire team for a one and done, end it now. How about a better job of due diligence in recruiting.

Oh please. Talk about a wild leap to uninformed conclusions. You were there? Better talk to the FBI about it then.

In view of investigations re payoffs, I think Jeff Foster’s questions are key here.

Maybe he can transfer to UCLA or Louisville.

Please - not another one. 2 games, 2 suspensions, too much!

I know : all kids make mistakes. Whatever, that excuse has been used more in the Self era than in any other KU coaches.

Head cases are distractions. He knows he is needed but I guess it isn't as important to him as it is to other players. He cannot be counted on.

How do you keep your nose clean for almost a whole semester, and then when it really matters, you step in it?

No way this ends favorably for us or this kid!

comments during the game tonight make it seem like this "suspension" may go on for a while. Hope this is not a bigger problem for KU than just Preston. And he didn't need to be at the game dressed like a million bucks with some high dollar sunglasses on for crying out loud. Try to look poor, not like someone dumped a lot of money in your lap, or bought you a car or whatever the H is going on with him.

I agree If we get De Sosa bench him watch him go to D league like Alexander Or like Bragg never even sniff NBA GROW UP !

He either did damage to University property, since it has been reported as a single vehicle accident, and the damage was significant enough to earn a moving violation citation, or he was not an insured party on the vehicle's insurance. Or, there was someone else in the vehicle that hasn't been reported yet, that could affect this matter. An investigation shouldn't take very long in any case, however.