Thirteen proved to be quite lucky this season for the Kansas men’s basketball team, which not only racked up a 13th-consecutive Big 12 Conference regular season title but did so on the strength of some extra hardware.

"It was a great year for our league," Self said. "It was thought to be one of the two toughest conferences in the country and to place two players on the first team, one on the second team and an honorable mention bodes well for how our guys played throughout the entire season. Anybody who is recognized as a top-20 player in a competitive league like ours should feel very good about being selected."

"This is a great honor from the Big 12 coaches but it could not have happened without my teammates and coaches," Mason said. "We've worked hard to get here, but have more things to accomplish in the next month."

The 5-foot-11 guard from Petersburg, Va., led Kansas in scoring in 22 of 31 games during the regular season and tallied 18 20-point games during that stretch.

Mason was a unanimous selection for this season's Big 12 Player of the Year honor, meaning that all nine Big 12 coaches who were eligible to vote for him did.

"Frank being a unanimous selection goes back to our very first game in Hawaii," Self about his senior point guard. "He has been one of the most consistent performers in America since the opening tip of the season. Probably no player in America, let alone our league, has been more valuable in crucial game situations to what Frank has for us."

Jackson, a likely top-three pick in this summer’s NBA Draft, saw his numbers improve each month during what is likely to be his lone season of college basketball. 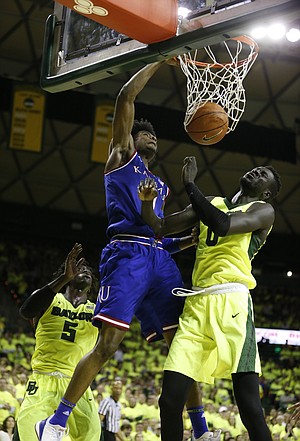 The 6-foot-8 guard from Detroit, who spent a lot of time playing the four spot in KU’s four-guard lineup, finished the regular season as KU’s second-leading scorer (16.4) and rebounder (7.2) and led the team with 51 steals and 33 blocks in 30.7 minutes per game.

"These honors reflect playing with great teammates and having a great season, which we are not done yet," Jackson said. "We have great leadership in our coaches and teammates and they too should also get credit for these awards."

"Josh has accepted coaching, his role and has improved at a consistent clip since the start of the season," Self said. "The last two months in conference play he performed to an All-American level."

All honors were selected by the 10 Big 12 coaches, with each unable to vote for his own players.

Coach of the Year: Bill Self, Kansas

How can both Jackson and Lecomte be Bid 12 newcomers of the year? Was it a tie?

Jackson won 'Freshman of the Year.' Apparently the Big 12 does not recognize Freshman as Newcomers. I'm not sure if this is purely a Big 12 interpretation but after the way they expansion, it seems appropriate.

I see that Matt fixed the first version of his article in which Jackson was listed as newcomer of the year.

The voters got it right on all accounts.

Manu Lecomte was a transfer from Miami, thus a newcomer while not a freshman.

What doesn't add up is that Jackson had seven Newcomer of the Week awards, the most other than record holder Michael Beasley, yet was not awarded Necomer of the Year.

I'm sure there is no requirement to split the two awards unless a transfer player (newcomer) is better than any of the freshmen. Lecomte did not outplay Jackson!

I honestly didn't see it coming. I figured Frank would have a solid senior year but this was beyond spectacular, it was an amazing year.

Pleasantly and equally surprised how well the team has played from the start. But I am very pleased and happy to see this Kansas team achieve so much.

Last time we had a player of the year candidate, we made to the championship game. This year, I really believe we're the favorite to win it all.

It's a great place to be if you are a Kansas fan. Enjoy the tournament.

And while Bill Self is winning Coach of the Year in the Big 12, Kim Anderson is getting his pink slip from Missouri!

You're not along, Yonatan. I will confess that, when Frank was mentioned as a candidate for the Bob Cousy award earlier in the year, I predicted that he wouldn't win it because I didn't think his numbers would stick out on a well balanced team. Man was I wrong!

Not only is he the best point guard in the country, his numbers set records, and he should definitely win the Wooden Award.

Frank Mason III. What can you say about this guy? With Lecompte at Baylor, the shortest guy on either of the three All Big XII teams in a sport where height is such a valued commodity. The heart and soul of a team filled with players gushing with heart and soul. A guy that wills his team to win in so many ways in every facet at both ends of the floor. A guy who is never selfish with over 5 assists per game, and yet averages over 20 points a game. Often, he leaves you trying to figure out where he picked up his points because he is impacting the game in so many ways. There will be many great players to come and go at KU, but the likes of Frank Mason III won't be seen around here soon.

Wow! A triple whammy! NICE! Boom shacka lacka! Congrats to Coach Self, Frank & Josh. Well deserve for sure. Now, let's win another trophy and get to Phoenix and shine in the land of the Sun!

These are great honors and very well-deserved! Congratulations!

I can remember going back and forth with a couple of people about the Cousy Award, but what do I know. I am glad that I am able to say once again I told you so. Some said if he lead the team in scoring then the team would have a bad record which was not the case. Now hopefully I can make one more prediction and that Kansas will win the National Championship. Can I please get someone to argue that they won't.

Which hurts most? Your arm or your back? : )

Great job and well deserved! Let's get some more rewards in the BIG 12 Tournament.

Got to watch some other championship BB this weekend, which made me even more amazed to then rewatch the OSU game. Frank is so often in attack mode. It is just a crazy contrast to other PG's.

It is great whenever Devonte, Josh, or someone else steps up to take some of the load, but Frank is all the while lurking, poised to attack.

good points Humpy and Harlan. I think Frank has been the best point guard, leader, over a 4 year time-frame at KU in the past 40 years, maybe ever. just an awesome young man!