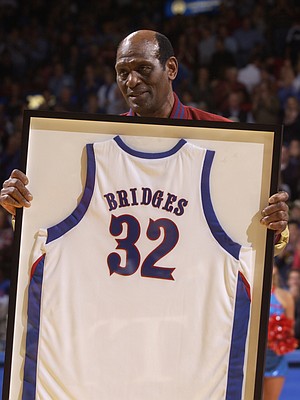 I enrolled at KU in 1958, Bill's first varsity year (freshmen didn't play varsity until quite a bit later). The article made no mention of Bill achieving so much with a chunk of steel embedded in one leg to repair a knee badly injured as a high schooler at Hobbs.

The court-charging in Columbia after Wayne Hightower retaliated for the non-officiated mugging all game long was as inspiring as any game incident I witnessed in my eight-year stint of never missing a game at AFH. When the precursors of the Antlers came pouring out under the basket, Mr. Bridges calmly took a station in the middle of the lane and began literally THROWING them, one or two at a time, back into the stands. The TV coverage showed dozens of fists thrown, but none by the guy from Hobbs,NM - though the fans who landed two or three rows deep in the crowd may have felt differently.

We, Bill and I and Curtis, were on the same dormitory floor one year and I agree 100% that there wasn't a better citizen, or friendlier student on campus than these two. While Wilt and a few others had taken some of the edge off Lawrence's racism, Bill Bridges and Curtis McClinton had as much to do with continued improvements as anyone could have at that time.

Nice post, John. Bill Bridges inch for inch is probably the greatest rebounder in sports history. He's right up there. Remember he was 6-foot-6. He's fourth in school history in rebounds and 50th in scoring which is pretty darn impressive considering they played so few games back then compared to now and he played just 3 years of varsity ball at KU. Bridges was a helluva player. It's again baffling they had those stupid guidelines for so many years and he didn't get his jersey hung until 2004. Bill Bridges shoulda had his jersey hung much sooner. But no harm no foul. He was alive and well in 2004 and very proud of the honor once it arrived.

Never a more true All American. Class, Sportsmanship and Desire. His all out "must have" the rebound has not seen many a equal in basketball. Great player. Rest in Peace sir.

RIP, Mr. Bridges. Thanks for all you did for KU and in life.

Coach Self will make sure they pay tribute to Mr. Bridges. If not at Late Night it will happen at one of the games.

Until Danny Manning, Bill Bridges was the only KU basketball player to score 1,000 points and get 1,000 rebounds. Has anyone else done it since? Maybe Collison or LaFrentz?