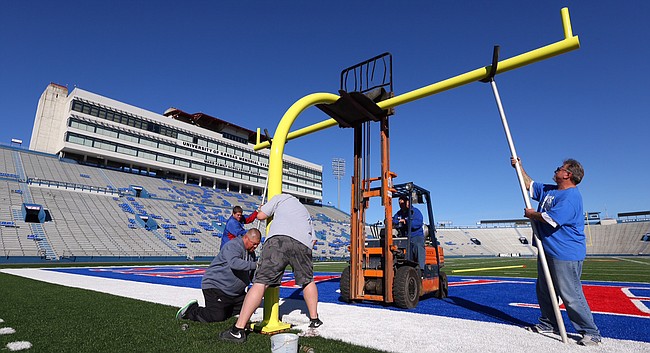 The goal posts came down Sunday night, but it wasn't for a KU victory.

Several individuals broke the lock on the south gate to Memorial Stadium after the Royals' World Series victory, took down a football goal post and tossed it into Potter Lake. KU officials confirmed the incident this morning and said athletic department officials were disappointed that the celebration included vandalism.

"I thought the slogan was 'Take the Crown' not 'Take the Goal Post,'" joked KU associate athletic director Jim Marchiony. "We're all thrilled about how the Royals have played all year and we're excited that they won the World Series. I just wish that some folks had chosen to celebrate in a different way. The personal safety issue here is what really worries me, and clearly no thought was given to that. The rest of the disappointment just lies in the destruction of property."

None by Anna Del Slay

The Royals win and the goal post gets taken down in lawrence! Best fans. Goal post is in the lake on campus😂 pic.twitter.com/aMW1nLE9B5

None by Parker Ward

Broke into the stadium, tore down the goalpost, raged in the library, danced on some tables... What a time... What a time to be alive 🙏🏼🙏🏼🙏🏼

None by Michael McCurdy

None by Amie Just

None by Amie Just

The individuals did damage to the stadium gate and the goal post itself.

He asked that anyone who has information about the vandalism to call KU Public Safety at 864-5900 or Crimestoppers at 864-8888.

By mid-morning Monday, the goal post had been replaced inside the stadium.

None by Nick Krug

Wow KU students. When the Jayhawks won the title in '08, there was little to no property damage or problems. But when the Royals win the title, you do this, not to mention climbing poles and taking down street signs on Mass Street. You should be embarrassed, especially considering the KC police chief stated there were no arrests or fights even in KC last night.

Are we sure they are students?

It was probably Tiger fans

Just another example of individuals feeling entitled to act upon their euphoric moments and damage other entity's or individuals property. I hope they have their wallets ready to reimburse the University and the City of Lawrence, Kansas for the damages that they've caused.

Not fun, not cool, and certainly not classy. I would expect this of Mizzou fans, but not KU. Prosecute identified participants to the full extent of the law.

I agree completely with Michael There is always the criminal element who feel that a celebratory occasion like this gives them license to do damage and destruction.

Perhaps, when the future Memorial Stadium renovations are in progress, the University will approve automatic, collapsible goal posts to be installed (in order to avoid such issues (in the future). That way, replacement cost won't be an issue for the AD.

Collapsible goal posts wouldn't have helped in this case because officials weren't prepared for people trying to take the goal posts down.

If the goal post are collapsed after every game is over and stored off-site (until the morning of the next game). Then perhaps, the situation wouldn't have happened.

I believe the goal posts are currently collapsible

I would not conclude that a whole town isnt "cool" based on the actions of a handful of kids.

Welp. Might as well take 'em down for a Royals victory; it may be years before fans take down the goal posts due to a KU football win.

The perpetrators should be tied to a post and publicly gang slapped.

Had the pleasure or rather misfortune to watch Jayhawk football 76-80's. Recall a few rare wins where i thought that this was appropriate. Not for the Royals. Low class.

I don't even like baseball but think this is kind of cool.

Are KU students really this desperate to tear down the goalpost? The Royals' World Series win had NOTHING to do with KU football! If you're going to tear down the goalpost, do it for a significant KU football win (i.e., Kansas 40, Nebraska 15 in 2005 to break the Husker Hex). And by significant win, I don't mean last year's victory over 0-for-the-conference Iowa State.

The answer to your question is "YES"!

Not condoning the action at all. But I think it speaks to the desperation of Kansas fans. Between early exits in the NCAA tournament recently and having a poor football team for a long time, the exhilaration of a Championship of a nearby professional baseball team is easily transferred to a handful of overjoyed kids who are fans of both the Royals and the Jayhawks.

Is it right? No. Do I understand it? Absolutely.