Gwangju, South Korea — Playing for a spot in the World University Games quarterfinals, Lithuania hit big shots in the fourth quarter to beat Australia, 74-67, on Thursday at DongKang College Gymnasium.

Lithuania’s reward for the victory is a matchup with the United States men’s basketball team at noon Saturday (10 p.m. Friday on ESPNU).

Along with its victory against Australia on Friday, Lithuania (4-1) beat Finland, Japan and Chinese Taipei by at least 16 points in pool play. Lithuania’s only loss was a 96-89 setback against France in overtime.

One of the differences in Lithuania’s pool was the different styles of play between all of the teams.

“They’re two different types of teams,” Mockevicius said of Australia and France. “Same as like Taipei and Japan. We have to prepare. The game plan is always different and it happens with … each team. It was kind of weird. For example, in the United States, most of the teams play the same basketball. Asia is just completely different. But we’re excited to advance in the quarterfinals.” 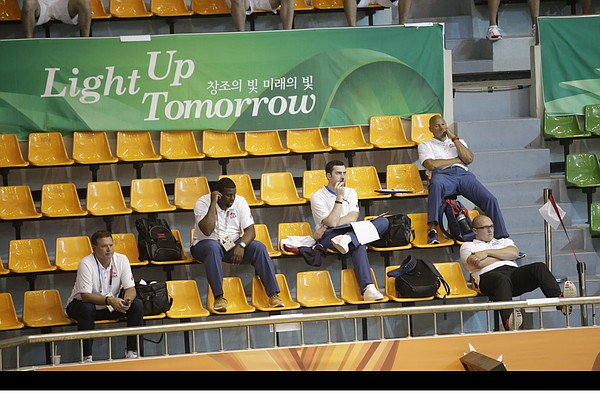 Mockevicius said he knows plenty about Kansas basketball. The senior at the University of Evansville was a first-team All-Missouri Valley selection last year after averaging 14.8 points, 9.9 rebounds and 2.2 blocks per game. His average of 7.7 defensive rebounds per game ranked fourth in the nation last season.

“I try to follow both (the NBA and NCAA),” said Mockevicius, who leads the tournament in field goal percentage (60.5). “During the main season, I watch NBA. During the student season, I watch NCAA. I have no preference of who wins or not.”

In the World University Games, Lithuania is the only team that has scored more points than the Jayhawks. Lithuania is shooting 50.2 percent from the field, including 38.1 percent from deep. Lithuanian sharpshooter Rokas Giedtraitis leads the squad at 14.4 points per game.

What’s been Lithuania’s strength in the tournament?

“Probably togetherness and devotion,” Mockevicius said. “We’ve been together for a really long time so we know each other pretty well. And our coaching staff is just amazing with how much work they do every night — on a daily basis pretty much. We’re just fortunate to have them.

“I mean basketball is always big in Lithuania. This tournament means like a lot to us because it’s probably our last one for most of us. We’re like 22, 23 year old guys and that’s the limit.” 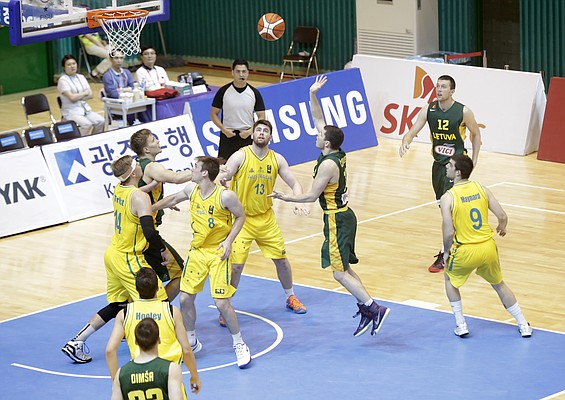 So we need to go through Lithuania and Russia before reaching the golf medal game. I must be an over the top homer to always believe the Hawks always get the short end of things like ...the draw, fouls call or not called, and an array of other calls that never seem to go our way. like running with the ball and not dribbling., jumping over Moore's back then receive an intentional foul call, etc, etc. If we can make some shots, hit our FT, play solid defense and rebound both boards...we will do just fine.

I don't like to hear that they've been hitting such a high percentage of their shots. Hopefully that's more because of their opponent's lack of defense (look how well we shot against Chile and Switzerland) and not because they are all just sharpshooters. If they are all just great shots (on these tight rims) that's a bad matchup for us IMO. I'm not saying we won't win, just saying it could be scary difficult.

Why is it so hard to get a bracket outline for this tournament?

Because of the way international tournaments are set up brackets do not work. WUG is about the Game # not about seeded bracket play. Its not a count down to just a champion like the NCAA or a conference tourney. It is about each team finishing in a place from 1-24. So each team continues to play until they are placed. Not eliminated. Does not really fit that cleanly into a bracket.

Took me a while to find as well...the top is the standings and results from the group at the bottom is the championship bracket...haven't found the other brackets.

Jeff, You are awesome! I was craving for the brackets/pool standings for such a long time... Thanks!

Truth be known, Suzi, we all are probably "homers" to a certain extent. That's natural and nothing for us to be ashamed about.

Your analysis of the officiating is on the mark, especially as it relates to Nic Moore. He's just been manhandled during these games, and the refs have let most of it go.

Whatever happens, I will be extremely proud of the players and coaches that we have. I just hope that they come home with a medal to put in their trophy case forever.

I also like the attitude of the Lithuanian player. He is dedicated and respectful. He will likely have a career in basketball available to him after these games are over, and I hope that it is successful.