Kansas guard Andrew Wiggins (22) breaks away with a steal for a dunk late in the Jayhawks' 80-63 win against Louisiana Monroe, Friday, November, 8, 2013 at Allen Fieldhouse. 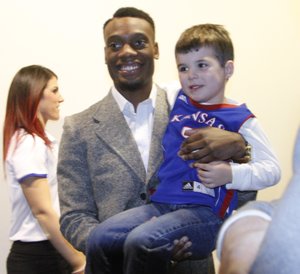 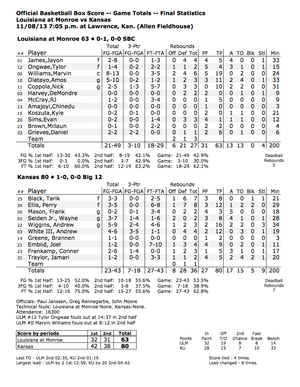 The first game of Andrew Wiggins’ Kansas University basketball career could best be described as “efficient,” coach Bill Self said on Friday night in Allen Fieldhouse.

“I thought he did some good things,” Self said after Wiggins scored 16 points off 5-of-9 shooting (2-4 from three) with three rebounds, three steals, two assists and two turnovers in KU’s 80-63 win over Louisiana at Monroe.

“Of course he made a couple of shots and everything. You can go through the whole team and you want more aggressiveness. You want guys to have more pride defensively. We got a chance to crack it several times during the game and didn’t crack it, because there’s not the killer instinct to crack,” Self added.

Noted Andrew White III, who scored 12 points: “He did well. He got into the flow of the game quick. He is very unselfish. He throws the extra pass. Tonight he was smiling. I felt he enjoyed the game.”

Wiggins, who played 34 minutes, most of any freshman at KU since 1987-88 when records were first kept, was not made available to media after the game.

Embiid’s debut: Freshman center Joel Embiid had nine points and four rebounds in 11 minutes. He did not play the first 15 minutes of the second half.

“At half, that number zero (Marvin Williams, 19 points total) scored eight points on him. It wasn’t all his fault but we need to guard,” Self said. “It’s not an equal opportunity deal. I thought he did pretty well when he went back in.”

Noted Embiid: “I was very nervous, shaking on the bench. I tried as hard as I could tonight to help us win the game.”

Almost: Tarik Black just missed ramming a dunk off a lob from Wayne Selden in the second half. The pass was a bit off target.

“I told them (teammates) to stop talking about it in the locker room. I’m hurting about it,” Black said with a smile.

Red-shirt talk over: Arkansas transfer Hunter Mickelson will be the only Jayhawk to red-shirt this season. Brannen Greene and Conner Frankamp, who were possible candidates, both played, thus eliminating the possibility of red-shirting.

Hearing how nervous Embiid was just goes to show how big of a stage these young guys are on, even Wiggins. One thing I've noticed about Wiggins is he's very humble and about winning. He's very unselfish but I have confidence that when we need him to take over a game, he will do it. I put money down that he's a different player against Duke. He'll be aggressive, play tough defense, and take every chance he has to go to the rim. The first game jitters are out, now it's time to execute.

I also think that with a team this young, playing on a neutral court may alleviate some of the pressure they feel to put on a great show for the 16,300. It must be awful to feel the energy in the fieldhouse disappear during stretches of mediocrity. That being said, it was Self firing up the crowd last night that helped kick the effort up a notch. Can't wait till Tuesday. I have no idea what to expect against Duke but I sure am excited to see it!!!

Jo-elle and Tarrick is how the AFH announcer has been pronouncing them. Assume that is correct.

You are correct. The players got to iterate how they're names are pronounced this year so the announcers don't mess it up. Tarik specifically said one time to the media how to pronounce it too, Tar-rick. Also, apparently they were messing up Naadir's name last year, this year he told them to pronounce it Nye-deer.