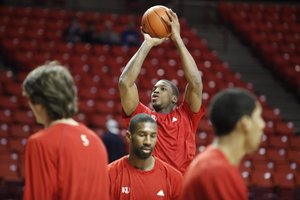 Kansas coach Bill Self talks to reporters following the Jayhawks' 72-61 victory over Oklahoma on Jan. 7, 2012.

Norman, Okla. — After hitting the showers and meeting the media, Kansas University’s Travis Releford traipsed back into Noble Center on Saturday to meet his own personal cheering section — one led by his grandmother, Rose Cliff, who lives in Wagoner, and seven cousins from Tulsa.

“We’re very proud. He was excellent. He put on a great show for us,” Releford’s cousin, Brandon Armstrong, said after watching Releford, KU’s 6-foot-6 junior forward, explode for a career-high 28 points in KU’s 72-61 victory over Oklahoma.

Releford hit nine of 13 shots overall, including three of five from three. He made seven of eight free throws while also grabbing three rebounds with two assists and two steals in 34 minutes.

Was he extra fired-up playing for his grandmother?

“Maybe,” Releford said with a smile. “She doesn’t get to come see me play much. Last year she came to a few (NCAA) Tournament games. That was it. She never has seen a game in the fieldhouse.

“I mean, I didn’t say, ‘I need to come out and score points for my grandmother.’ It was nice, but I was only playing, doing what I can to help us win.”

Releford has been on a roll offensively. He scored a then-career-high 16 points off 6-of-11 shooting in Wednesday’s 64-49 Big 12-opening victory over Kansas State.

Saturday, he had 16 points the first half off 6-of-9 shooting (two of three from three). He played 19 minutes the first half, keeping KU in the game on a day the Jayhawks lagged, 34-33, at the break.

“In our conference games, Travis has been our best player,” said KU senior guard Tyshawn Taylor, who scored nine points off 4-of-10 shooting. Taylor was 0-for-5 from three; KU hit four of 19 treys to OU’s three of nine.

“He is attacking the rim, making open shots. It’s exactly what we knew he could do. His stroke is getting better. The last couple years when he hasn’t been playing (much), he’s improved his shooting. He’s one of the best defenders, if not the best we have.”

KU coach Bill Self said Releford “was more aggressive offensively. I think the K-State game gave him a lot of confidence. He still got most of his points off junk. The three threes he made were great, but most of his points were taking the ball to the basket when we had numbers.”

Releford, one of various players to guard Steven Pledger (14 points, 4-for-12 shooting, just two points in the second half), insists his only goal every game is to play rugged ‘D.’

“Coach Self lately has told me to stay aggressive,” Releford said. “I try to continue to be aggressive, take what the defense gives us.”

Of his offense, he said: “With T-Rob in the post ... he’s drawing so much attention, it helps our wings get open. It frees me, Tyshawn and Elijah (Johnson, nine points, 4-of-7 shooting).”

“Our defense was excellent. We got out in transition. That’s the best stretch we played. Other than that, it was back and forth,” Self said.

Apparently, Self didn’t do much screaming at halftime.

“Coach didn’t say much (at halftime). We played an awful first half,” Robinson said. “We knew if we cleaned up our play and came out stronger, we could win the game.”

Self said: “Other than Travis Releford ... he kept us in the game the first half. I thought a couple other guys were still in Lawrence, the way our heads were into it. The second half, for whatever reason, the lights came on, and guys seemed focused and were more intense.”

Releford and Robinson finished with 46 of KU’s 72 points. The Jayhawks hit 50 percent of their shots to OU’s 38 percent. KU had 14 steals and forced 17 turnovers while committing 13.

KU (12-3 overall, 2-0 Big 12) will meet Texas Tech at 8 p.m. Wednesday in Lubbock, Texas. The Jayhawks’ chances will be enhanced, of course, if Releford continues his sizz.

“He’s been big starting out the conference,” Robinson said. “He is definitely playing his butt off right now.”

.I needed a good chuckle tonight

He was already playing well, but I say get those cousins and grandma tickets to every game!

All seriousness, Releford's emergence is exactly what this team needed to propel us to the next level. You can't win consistently with two scoring options, especially in conference. The teams know each other too well, defenses are usually able to take away one or more things you're trying to do on offense. Having the third option was going to be key to our season's success. The fact that it is Releford, who has a nice game both on the perimeter and attacking the defense, is all the better. EJ has that ability too, although we are not seeing his jump shot fall and he is not attacking the rim yet with as much frequency & effectiveness. As has been mentioned in the post-game discussion, getting him on track is next. Imagine if defenses have to respect all 3 of TT, EJ, & Releford on every part of the court.

Everyone wins but mizwho. Sweet!

Congratulations, Travis, on such a fine start to a long league season.

If that hunger and tenacity that Releford plays with rubs off on the other Kansas players, nobody will beat us.

Except for any midmajor we play in the tourney.

Who is we you moron.

If Travis keeps this up he will be the next Scotty Pippen, and the Jayhawks will be so much better. Way to go Travis! Pippen learned how to take advantage of working off of other great players, and became one himself. Robinson is so much better if someone can take his double team passes and finish them, and so are the Hawks.

I never would have thought of that comparison, but it's a pretty good one.

Travis should have a decent chance of being named the Big 12 Player of the Week.

Im not jumping on the Pippen bandwagon. That said, considering the pomp and circumstance he came in with, its nice to see him play well this year.

What I really love though is the fact he seems to be the glue guy. We know where the key players are at. We need other guys to step up. My guess is it will be Releford on more than one occasion. Especially now with conference season starting up.

To me, he's been a great on the ball defender all year. Any points he chips in with -- even if its just enough to force the opposition to guard him tighter -- benefits this team greatly.

Fun stuff. But OU isnt the usual OU. Lets not get to crazy. But a conference road win is nice to see no matter where it comes from -- since Boulder and Lincoln arent around anymore.

Doesn't "traipse" imply that you wander without ever reaching your goal?

I had been thinking that he was a little on the "MIA" side, but these last two games have been excellent. Keep up the good work Travis.

I'd still like to see Travis as a wide out on the football team.

I couldn't be happier for a nicer kid than Travis who has stuck with the program when his little brother has gotten the more attention and press. The Tulsa paper reported he threw his wrist sweat bands into the crowd after the game. Let's hope it was to members of his family. Go Travis!

The question is: can Travis keep up the good work, or will he go back down to his solid, but not near as good as he has been doing, 8 points per game.