For Markieff Morris, the screen’s the thing

Eagles' Davis gets his fill 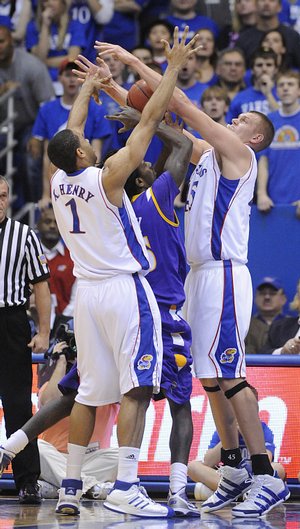 It’s not quite Robin Ventura getting a hit in 58 consecutive games for Oklahoma State, or Joe DiMaggio doing it in 56 in a row for the Yankees, but Kansas University reserve post player Markieff Morris has a nice little streak going.

A 6-foot-9 sophomore from Philadelphia, Morris has made 14 consecutive field-goal attempts after missing his first shot of the season. He has made all three of his three-point shots.

And all Morris wanted to talk about after playing 18 minutes and contributing 11 points, six rebounds and three assists in Friday night’s 112-75 rout of Tennessee Tech in front of the customary 16,300 fans packed inside Allen Fieldhouse was setting screens. He might have been done growing vertically by the time he came to Kansas, but he’s done a lot of growing in other ways.

“Coach emphasizes screening in practice,” Morris said. “We practice screening a whole lot, and I think that opens our guys up for a whole lot of open shots.”

He grew excited talking about the keys to setting good screens.

Markieff Morris said he wasn’t aware he had missed just one shot.

“I don’t really pay attention too much to that,” he said. “I just try to do what coach needs me to do so I can stay in the game.”

Therein lies the beauty of depth on a basketball roster. Nothing motivates quite like a seat on the bench. Keep the stickler for details happy by doing all the little things, and your chances of not having to sit near him improve.

The Jayhawks are keenly aware that one good way to earn a seat on the bench is to monopolize the basketball, instead of keeping it moving. For the second time in three nights, Kansas had a terrific night passing the ball.

“Everybody had open shots because we kept the ball moving,” Markieff said.

He is playing 14.4 minutes per game, time enough to average 7.4 points and 5.4 rebounds, roughly 15 points and 11 rebounds a game if he played 30 minutes a night. With twin brother, Marcus, and preseason All-American center Cole Aldrich playing in front of him, those type of minutes aren’t available, so he makes the most of those he gets and tries to improve at the little things to earn more playing time.

“It’s tough,” Aldrich said of going against him in practice daily. “It’s tough. I couldn’t say it wasn’t tough at times last year. Markieff, I would say if I could pick a person coming back, he was probably the most improved over the summer, him and his brother. They kind of got over the attitude of limiting themselves working hard. Now they really work hard all the time. With those two working hard, it just makes the whole team better.”

Markieff won’t shoot .933 from the field all year. As the competition stiffens, his production stands to decrease. Of more importance, look for his effort level to keep right on rising.

Did anyone see Morningstar at the game? He looked like he was dressed to go to a grunge concert! Flannel and blue jeans come on... you look like a slob and you sound like you are from the ghetto!

yeah, Markieff, keep it up, man! watching the twins play is more and more enjoyable. it's even so much exciting to follow their journey from players that were just so-so a year ago to players that wow the crowd in each game. by the end of their careers in KU, Morisses could become the best twins ever played in NCAA men-bball history. go Jayhawks!

was the o'bannon brothers at ucla twins?--think they were pretty good and the go to guys on that title team just a question?

OBannon's were twins but had a different mother. (okay old line, couldn't resist.)

on defense last year twins arms straight up were more like tower of pisa- today they are totally perpendicular, much improved positioning hence less fouls, and last year when they did get a foul they scawled(*) at the official, didn't make any pals there, and this year, on rare occasion they get a foul, they smile at the official.

no one owned the officials like danny for those that watched him know what i mean, and the twins can own them also, if they want them. they should watch last year tape and laugh at themselves.

The Morris twins look like completely new players- they're so aggressive now. Marcus has a move to score with his back to the rim, and they are both taking better shots. I think it was even Marcus last night who led a fast break for a score. They're also playing much better D. I think Marcus could be one of the top 25 Power Forwards in the nation this year- and maybe Rivals willl add him to the list. Markieff too if he gets an equal amount of playing time. These guys will be able to carry a large load next year if(when) Cole leaves. Can't wait to see them play as Seniors. In the same way that the Morris twins looked like freshman last year, I think T-Rob also has that look to him out on the court sometimes. Since he's already coming in at 230lbs, I wonder if he'll bulk up to 250 over the summer! ha.

KUKRU- yea I wish Brady would have worn a shirt and tie instead, the flannel shirt was atrocious. I saw that hes still wearing a boot too. Either way, the team will be better Jan. 1st when Withey and Morningstar come in.

BucknellJayhawk3 says - "the team will be better Jan. 1st when Withey and Morningstar come in."

I believe Withey is eligible in Dec, when the first semester is over.

Dragon - I think part of the reason you caught as much grief as you did after the recent posts was b/c of the generally negative vibe of your posts. It sounded sort of Mangino-esque (pre-inquistion), which just turns off some people to what you are actually saying.

Realistically, I'd guess there are only a few people on this blog that could even have an intelligent discussion with you concerning the finer points of playing BB, and I will readily admit that I am not one of them. I appreciate the insights of people like yourself and Jaybate (when posts are shorter than W&P), but if someone just starts to go off all negative, I personally don't have much time for them.

That is in no way meant to say that everything is always rosey, but that there are always 2 ways of saying anything - a positive and a negative way. Life is too short to be consumed by the negative.

This article reminds me of one written December-ish last year, where the twins commented on hearing a lot in practice about needing to rebound and not about scoring. So they mentioned needing to rebound, but still reverted to discussing points for in the article.

It sounds like Mk is actually getting it now. He wasn't even away of a near perfect shooting percentage! Hopefully, he maintains the same attitude.

It porbably also helps that SC has so much O help around him this year. He is once again the poster child for selfless play and the others must see it, vs. seeing him looking to score (/Self not self).