KU coughs it up

K-State wins by not losing

Will the KU football team make a bowl game this season? 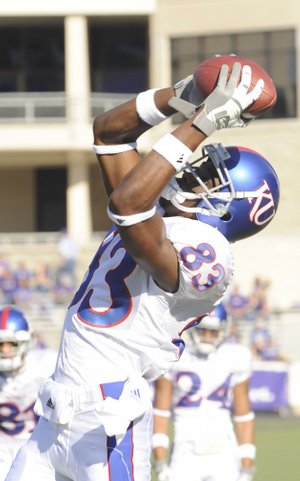 They still received some in the form of blue and red paint.

KSU’s campus was vandalized early Saturday morning, as paint was smeared on KSU’s Powercat logo and along the sidewalk outside the Vanier Football Complex.

Though the damage was sprayed off with water Saturday morning, the effects of the graffiti lasted a bit longer.

“I’m very routine before a game, and that kind of took me out of my element for a second,” KSU center Wade Weibert said after the Wildcats’ 17-10 victory. “I was like, ‘Forget that. The gloves are off. This game’s coming. This is for real now.’”

KSU coach Bill Snyder addressed his team about the incident before the game.

“He was extremely upset, and he had every right to be so,” KSU linebacker John Houlik said. “You just don’t come in and do that to somebody. We’re not going to let anybody come into our home and do something like that to us.”

Because the damage was cleaned up early, most players said they didn’t see the paint, but instead had the story relayed to them by Snyder.

“Disrespecting us on our property, we took that in another way. That hurt us,” KSU safety Emmanuel Lamur said. “That’s a sign of disrespect. They don’t respect us at all. So we proved ourselves like, ‘OK, we need to go on the field and prove to these boys what we’re capable of doing.’”

Earlier this week, a KU billboard along I-70 was painted with the white letters “EMAW,” which stands for “Every Man a Wildcat.”

KSU safety Tysyn Hartman said he expected some sort of retaliation, but having something happen on his own campus was a more serious matter.

“You see a picture of something happening, that’s a little different than seeing it first-hand,” Hartman said. “It’s like, ‘I’m here almost every day, six, seven days out of the week. They came this close and vandalized.’”

Weibert was most bothered by the location of the paint: on top of KSU’s Powercat logo.

“That’s a huge slap in the face,” Weibert said. “Our logo is like our flag. It’s like in America with our flag —you’re going to do whatever you can to protect it.

“That Powercat, that’s our logo. We’re here to protect it. That symbolizes us as a family and as a team. The fact that someone can come in and do something bad to it, it definitely ticked us off.”

Houlik said the incident was difficult to ignore.

“That obviously motivated us some more,” Houlik said, “to come out there and try to put it to them.”

The "vandalism" harkens back to the old days. Notice the red and blue washed off with water........more fun than vandalism. I remember waking up to purple water in the KU fountains one nice fall day prior to the KSU game......made people mad but did no harm. Dead chickens, dead kitties, blah blah blah......maybe it hasn't happened in recent memory, but boy oh boy it used to be a regular event...I don't like the paint on the cars, but the Powercat? Come on. What has happened to the Jayhawk over the decades from KSU fans? Who knows who started it? I guarantee you it wasn't the Jayhawk football team who painted stuff on K-Straight's campus, but come on fans, don't give the kitties additional energy because some idiot painted their cars.

I'm starting to wonder if our guys would have that heart-felt of a reaction to the defacing of a Jayhawk. Seems as though the same kind of "defacing" is happening on the field every Saturday. And we need to reach down, become a family and defend our own. Reesing has been the energy/motivator on this team, and he's down. Others need to step up and pick him up and slap him around a bit. I don't see that energy, with guys getting in each others' faces and saying "Let's Go!" We need a ferocity on this team soon!

Give me a break. Snyder, the kind of build up, probably did it himself to fire up the troops. It sounds like the Kstate players almost believed that the KU players are the ones who did this. They sound like idiots. If you need something like a college kid prank to get you fired up, you dont deserve to be a D1, Big 12 football player. KU players need to dig deep, we have looked stagnet for the past month. I dont know what the leadership situation is, but somebody needs to get the players together and go nuts.

What about the KSU fans storming the field in Memorial Stadium in 1994 after beating KU for the first time in Lawrence since 1969 and tearing down KU's goal posts? I don't recall Bill Synder making any attempts to stop his own fans from such disrespectful behavior and vandalism. And worse yet, no KU students did a thing about it.

Hmmm, washed off with water eh. Is it possible this was done by K-State students in an attempt to motivate their team? Just a thought. As already mentioned, this sort of stuff has been going on forever. I'm amused when coaches and players try to fabricate anger out of something so lame.

This has always happened with KSU and Missouri and yes the coaches will use for a little extra game day fire. It does help get some kids fired up for rivalry games, believe or not. Keep in mind that most of these players are not from Kansas and don't have the intense feelings that some of the student body have so something like this DOES help young kids get more fired up.

minnhawk84 & jhokfan - My thoughts exactly wrt the paint washing off with water. Maybe it shows great coaching tho, in that it appears it may have been the difference in the game.

Oh yeah, and booing the KU Marching Band was an added touch of class.

"And worse yet, no KU students did a thing about it."

What exactly do you think the KU students should have done, Machawk, started a riot??? The rest of your post made sense but that was just plain idiotic.

Like minnhawk84, jhokfan and dagger, one of the first things I thought of is that this could well have been an inside job by someone at KSUck to get the team fired up. Why not, if it works? And Cheney, I agree with you about them booing the band, but is there really anyone who's surprised by that? I'm no more surprised by that than by the fact that a KSUck fan practically knocked me over when I was looking the other way and then didn't say a word as he melded into the KSUck student section. A typical classy move from Silo Tech.

My son and I attended the game at Silo Tech. Get this--Around 10 - 12 members of the drum section would surround unsuspecting Jayhawk fans in the parking lot and beat out some stupid cadence and then at the end they would yell in unison "reload". We were one of their victims. The two of us wanted to shove their drum sticks where the sun does not shine, but decided to ignore the jerks. They even surrounded a young family with two little boys around the ages of 2 and 4 and did their stupid routine. It scared the hell out of the kids and they both cried uncontrollably. The idiots did not stop or apologize. I thought the dad was going to beat the hell out of them, but the wife stopped him.

I also agree that the paint job was an inside job by Billy Boy. Much like I think it was Billy Boy who had a hand in separating the KU fans into 11 separate sections so as to keep the noise to a minimum. I have gone to almost every game in Manhattan the past 20 years and they have never pulled this stunt. I always felt somewhat safe with the friendly folks in crimson and blue. I never felt comfortable because there was purple mixed in with the "good" colors. So much for a visiting section.

Wow, JayhawkCrazy, that's a new low for them -- in fact I'd say it rivals Misuse when it comes to classlessness, which I didn't think was possible even for KSUck.

I do have to mention that I had a nice conversation throughout the game with a couple of KSU fans who actually did show some class. In fact when one jerk kept trying to block my view, one of the KSU fans told him to knock it off. So there are at least a few people there who understand the concept of sportsmanship. Sadly, they seem to be a distinct minority.

@CheneyHawk As a former member of the KSU band... You must not have been at the games in Lawrence where they ALWAYS boo the K-State band when they take the field. That didn't bother me so much. What did bother me was when your students threw full cans of beer at the KSU band after the game while we waited on our bus. Want to talk about classlessness? Start there. We are always respectiveful in return. In instances like this, it is hard, but we have chalked it up to the rivalry. We suggest you do the same.