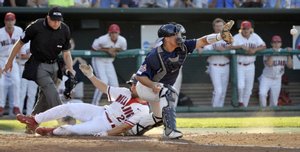 They just might get a chance to order some national championship shirts pretty soon.

Fresno State's improbable postseason run will end in the College World Series championship round after Tommy Mendonca drove in four runs and Clayton Allison overcame a shoulder ailment to shut down North Carolina in a 6-1 victory Sunday night.

"If you look where we started out," closer Brandon Burke said, "where we're at now is inconceivable."

A Fresno State team (45-30) that became the first No. 4 regional seed to reach the CWS now finds itself matched against Georgia (44-23-1) in the best-of-three championship series starting today. Fresno State joins clubs such as Eastern Michigan in 1976, Wichita State in 1982 and Pepperdine in 1992 as surprise finalists.

North Carolina (54-14), the No. 2 national seed and CWS runner-up the past two years, was denied a third straight appearance in the finals.

"Fresno, they've got to put the underdog card down," Georgia coach David Perno said. "It isn't going to fly with us. They're a real good baseball team."

Fresno State coach Mike Batesole has used underdog talk to motivate his players throughout the postseason, and he doesn't plan to stop now against Georgia.

"You look at the two clubs on paper," Batesole said, "and you'd have to think that."

Maybe on paper, but what about on the field?

Georgia is the first team to bounce back from a losing season to reach the CWS finals the following year.

Neither has an overly impressive record, and no team with more than 23 losses has ever won a national title. That could change this year.

Fresno State's journey has been anything but smooth.

The Bulldogs have made it through the postseason without ace Tanner Scheppers, a second-round pick by Pittsburgh, who is out with a slight rotator cuff tear.

In the regionals, Fresno State came off a 15-1 thumping by San Diego to beat the host Toreros, 5-1, the next day for the title.

In the super regionals, the Bulldogs lost the first game, 12-4, to Arizona State, then won two straight against the No. 3 national seed to advance to Omaha.

Fresno State hammered Rice, 17-5, in its CWS opener and beat North Carolina, 5-3, in its second game. The Tar Heels came from behind Saturday to win, 4-3, on Chad Flack's eighth-inning home run.

Still, the Bulldogs' resolve was anything but broken. They were in control all night Sunday, pressuring the Tar Heels every inning and scoring at least a run in each between the third and sixth. North Carolina used seven pitchers in all, including Alex White, who was making his fourth appearance.