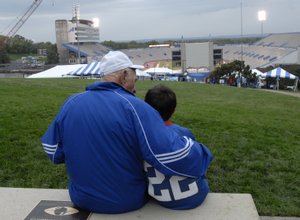 The rain stopped long enough for the ceremony to take place uninterrupted, and as soon as it was over, the rain returned.

To the surprise of a moved Fambrough, Jaynes and 256 other former teammates and players of Fambrough's pooled resources to raise $17,000 for a concrete bench dedicated to him and located underneath the Campanile and overlooking Memorial Stadium.

In part, the plaque on the bench reads, "Coach Fambrough has shown a love and commitment to the University of Kansas and the KU football program unequaled by anyone in the history of the university."

Jaynes said that when he spoke to Warren Corman, KU's chief architect, about the bench he stressed that it needed to be "bomb proof, make sure no one can come here in the middle of the night before the KU-Missouri football game at Memorial Stadium and remove this."

Jaynes said the money raised beyond what it cost to construct the concrete bench will go into a scholarship fund that bear's Fambrough's name.

When it came time for Fambrough to address a gathering of former KU players and current fans of the program who made their way up the hill for the ceremony, the forever young football coach started with humor and stopped when he was fighting back tears.

"I guess for the first time in my life I'm speechless," Fambrough said. "I always thought before that benches were for people who were dead. Maybe David forgot to tell us something."

How much does the bench mean to Fambrough?

I'd like to see the pictures, but it says "the requested page could not be found". That is happening ALOT with this site lately...

I'm having the same problem - no gallery

Always liked Fambrough, won't find a more loyal Jayhawk. Even though Bud Moore gave us a season and a half of exciting football I think firing Don was a mistake. He recruited 7 players for Bud that ended up on NFL rosters.

Apologies about the Fambrough photo gallery producing an error message. This has been corrected.