Chicago — Kansas University will meet Kentucky in a second-round clash at 4 p.m. Sunday at the United Center. The Wildcats beat Villanova, 67-58, in Friday's late game.

"I know Kentucky has strong transition defense," said KU sophomore Brandon Rush, who exploded for a career-high 24 points off 9-of-15 shooting in the Jayhawks' 73-46 rout of the Wildcats last season at Allen Fieldhouse.

"They are very good on defense. They'll want to make up for that game last year."

Of his own play in that game, Rush said: "My mind-set was different against Kentucky. I tried to be aggressive and make plays."

KU coach Bill Self said he respects UK coach Smith as much as anybody in the business. 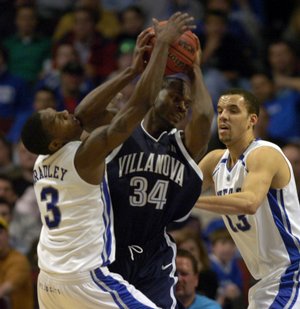 "They are a better team than last year and more balanced," Self said. "They really guard, don't give up easy baskets. They have always been that way under Tubby Smith."

Sunday's first game will match Nevada-Las Vegas against Wisconsin at 1:30 p.m., with the KU-UK game to follow 30 minutes after the final horn.

We need to take it right to their chin and get Morris into four trouble. I keep reading that KU is in trouble b/c we don't have anybody that can contain Morris. Well, we got Kaun, Arthur, and Jackson. Heck, throw Kleinman in their to steal a few minutes. The person who's going to draw fouls on Morris is "The Tank." What I mean by that is Collins is going to have a pretty big impact on getting Morris into foul trouble. If we do that we'll be in good shape, but If we don't get a foul on Morris in the first 5 minutes then we'll be in trouble. I guess you could throw "Super Mario" in there as well as someone who get Morris into foul trouble. We'll see, Go Jayhawks!

Morris is way overrated. He could have a great day, and we'll still whip the cats. By the way, we have plenty of people to contain him.

Kentucky is no threat at all.. our big men should be able to take care of their penetration. on the other hand, our offense should be flexible enough to gain more points. but we should be careful not to let them throw those 3-pointers. our defense should be the key. our thunderous dunks (please do not miss them!!) will even make the cats shivering..

KU really should roll tomorrow. Kentucky is very much centered around Morris. The wave of big men... not to mention different looks that he will see will shut him down. The hawks have proven that they are among the best TEAMS in the tourney.

Kansas' road to a championship could see them playing traditional powerhouse schools Kentucky, UCLA, and North Carolina. In addition, we could go through last year's champion Florida. And if we win it all we will also have beaten the program with the year's best player in Kevin Durant.