November hasn't been kind to Missouri University's football team. In fact, it has been an annual month of torture for the Tigers under coach Gary Pinkel.

While expectations always seem to be high around Pinkel's teams, late-season sputters often end up defining them.

The Tigers are 6-14 in the month of November under Pinkel, compared to 30-20 in all other months. Considering November is the stretch run of a season with extra emphasis and pressure, it's justifiably a cause for concern among MU faithful.

The latest 11th-month setback, a 21-16 loss to lowly Iowa State last week, actually was hampered by a late holding call on Missouri that took back a touchdown. The Big 12 later ruled the flag was a bad call, and with that in mind, Pinkel is addressing the game as if it were won by the Tigers.

The standings won't agree, though, and the loss put the Tigers at 7-4 overall, including a 3-4 record in Big 12 Conference play.

"Unfortunately, it will never go in the record books," Pinkel said. "But now, as far as they're concerned, in an unofficial standpoint, they're 8-3 and 4-3. I think they did a great job."

That's debatable, considering Iowa State was never within two touchdowns in any of its seven other Big 12 Conference games. 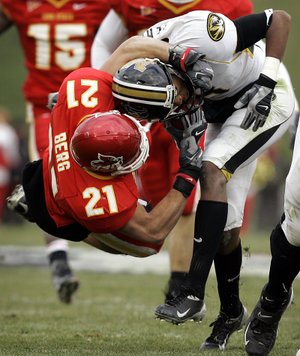 The Cyclones were able to expose what film is beginning to show as Mizzou's one weakness - rush defense. The Tigers rank seventh in the Big 12 against the run, and that stat would be even worse if they didn't rank in the top half of the league in sacks.

Iowa State running back Ryan Kock had 179 yards rushing last week - more than he had in the previous 11 games combined.

It's obviously a matchup Kansas has to like, considering the Jayhawks have the Big 12's top rusher - senior Jon Cornish - in the backfield, along with dual-threat freshman quarterback Kerry Meier.

But Missouri's no pushover, as its 6-0 start would attest. Led by mature sophomore quarterback Chase Daniel, two of the country's top tight ends in Martin Rucker and Chase Coffman and a pass defense that ranks 24th in NCAA Division I-A, the Tigers still have ways to win big football games.

Even if they haven't won any in recent weeks.

"I don't think we need anything extra to play this game," Pinkel said of his team, which has lost three straight to Kansas. "We just want to play it better than we have in the past few years."