Keegan: Kansas picks up the pace

On your mark, get set, blow the other team out of Allen Fieldhouse.

Get used to it.

There will be a lot of that from a fast-paced Kansas University basketball team that showed second-half mercy in sprinting to a 91-57 victory over a Northern Arizona team picked to win the Big Sky Conference.

At times, lineups that featured five players comfortable handling the ball zipped up and down the court in a first half that ended with KU leading 51-25.

As well as the Jayhawks shot the ball in that first 20 minutes (59 percent overall, 48 percent on three-pointers), it was their speed that was even more pronounced.

"Everyone on our team can get up and down the floor," said Brandon Rush, who sprinted off the floor after missing a shot at the halftime buzzer. "No one gets tired. We can go all day long."

Mario Chalmers was limited to 16 minutes because of a sprained big toe, and Sasha Kaun (knee) watched the track meet from the bench. It will only get faster. 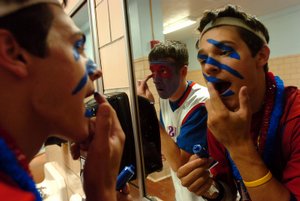 The speed will increase once Darrell Arthur (three blocked shots) becomes a more prolific defensive rebounder because he is so quick with the outlet pass and then so quick at beating his man downcourt. The more minutes he plays, the faster the pace.

It's likely KU will be favored in every regular-season game except against defending national champion Florida, and, generally, the more possessions in a basketball game, the less chance of an upset. Therefore, since this is a team with the personnel to play at a swift pace, KU is more upset-proof than most.

Plus, this is a team that, although it applies intense defensive pressure, does not leave itself out of position and open to allowing easy baskets. At the other end, the Jayhawks play fast enough to get easy baskets, yet under control enough to keep from piling up the turnovers.

The best stat line to display both those favorable qualities belonged to Russell Robinson, who had four assists and three steals, yet only one turnover.

"We have the bodies to do it, and it's to our advantage," Robinson said of picking up the pace. "We like to wear teams down, so it makes our defense better. When you go out and get easy buckets, it helps the morale of the team, and everyone just starts to feed off of that and bring energy to the game."

The Jayhawks did what they had to do to an opponent that couldn't match their quickness. They put the Lumberjacks in retreat from the start.

"They were a little nervous, and I think we fed off that," Robinson said. "We kept pressuring them and didn't let them get into a rhythm, and I think we were able to open up the game that way. : Northern Arizona has some players who are very capable, great shooters, great drivers. We just had to get out early and take their confidence away, and I think we did a great job of that."

Get used to it. Enjoy it.

It was the little things that were so impressive in this game. Good interior passing, excellent weak side help on defense, numerous examples of really finishing the play by either taking it to the basket and making the shot or following a missed shot with an offensive rebound and successful putback. Real teamwork that still allowed for individual highlights. The players all seemed to feed off of each other's intensity. Now the challenge will be to keep finding ways to improve each and every game.

Personally, I don't feel like the Kansas guards were aggressive ENOUGH (save Chalmers). Instead of pushing the ball down the court and pulling up at the three-point line, take it to the rack and either finish or dish it. That's what made Hinrich such a special player and what I believe will make Mario one as well. Be more aggressive Russell! B-E aggressive!