Numerous injuries have taken a toll on sinking Cyclones this season 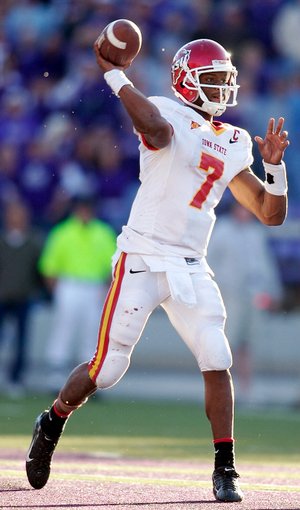 Iowa State quarterback Bret Meyer throws to a receiver during the second half of last week's loss to Kansas State. Meyer is one of the few healthy ISU skill-position players heading into today's game with Kansas.

He's about the only skill player on Iowa State's offense not currently battling an ailment. But considering all his teammates are hurting right now isn't making things easier on Iowa State quarterback Bret Meyer.

Meyer leads a depleted, injured offense into today's football game against Kansas University, combining running and passing abilities to give Iowa State a spark it desperately needs. More and more, the pressure is building on Meyer's shoulders in a season that has all but slipped away for the Cyclones (3-6 overall, 0-5 Big 12 Conference).

Starting running back Stevie Hicks (knee) may be lost for the season. Wide receiver Jon Davis (collapsed lung) is out today, and two other receivers, Todd Blythe (viral illness) and Austin Flynn (ankle), may not be 100 percent.

All are significant setbacks in ISU's attack. Nevertheless, Kansas still is leery of Iowa State's offense, and much of that is to Meyer's credit. Last year in Lawrence, Meyer managed the Cyclones beautifully, throwing for 257 yards and two touchdowns on 18-of-34 passing.

He threw one pick that day - to Aqib Talib - and nearly won the season finale that would've put ISU in the Big 12 championship game. Kansas came back and prevailed, 24-21, in overtime.

Meyer also rushed for 34 yards last year in Lawrence, and while he isn't the only dual-threat quarterback in the league, he's probably one of the most established.

"We've had a couple mobile quarterbacks this year, so we'll probably use those kind of schemes," Talib said. "You've just got to focus more on containing the quarterback and being more gap-sound."

Meyer was the preseason All-Big 12 quarterback in a media vote, but he probably won't win the postseason honor with the emergence of Texas' Colt McCoy, Oklahoma State's Bobby Reid and Missouri's Chase Daniel. Meyer hasn't had his best season statistically, passing for 2,028 yards with 10 touchdowns and 10 interceptions.

Part of that might be the constant injury-induced rotation among his teammates, though. His top target, Blythe, missed last week's game against Kansas State, while Flynn clearly is playing at less than 100 percent. The absence of Hicks won't help lessen the focus on Meyer, either.

After being picked by some to win the Big 12 North in the preseason, the Cyclones now are battling to stay out of the cellar - a fight they're losing at this stage of the season.

"I don't say surprised," KU coach Mark Mangino said of ISU's struggles, "because as a coach, you look into the factors why. They've had some adversity, they've had some setbacks in personnel, and those things all need to be taken into consideration."