There isn't much reason to get excited about Darrell Arthur, unless, that is, you happen to like:

¢ A 6-foot-9 sprinter who has such long strides he gets up and down the court at least as swiftly as the guards.

¢ A defender with so much spring he blocked the first shot attempted on him in Thursday night's 99-69 exhibition victory over Washburn University.

¢ An athlete who slides his feet so well that when he switched onto a Washburn guard 11 inches shorter, he drew a five-second violation because the guard didn't advance the ball.

¢ Instincts blended with an ultra-quick first step that enable him to snipe in the passing lanes so effectively that in the first half alone he had five steals to go with 10 points and four rebounds in all of 10 minutes.

¢ A scorer so smooth that when he banks in a jump hook, he almost looks bored doing it.

¢ Flypaper hands so sure that if the basketball is in the vicinity, he'll grab it, though not for long. He seems to know precisely what to do with it right away, especially when he blocks a shot or gets a defensive rebound and fires an outlet pass. 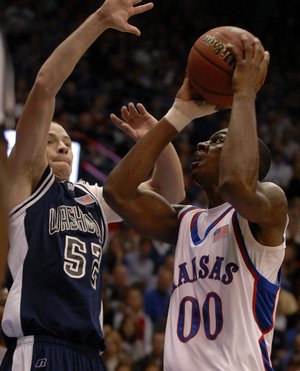 Arthur is a more resourceful inside scorer than anyone on Bill Self's roster. Arthur and a much more confident-looking Darnell Jackson played together with the sort of chemistry that suggested they had been teammates for a few years.

Arthur gets steals in unusual places, such as twice on the baseline under his own basket.

As the game reached its final minutes, Arthur blocked a shot at one end and blew a layup on the other, which is the equivalent of a sprinter taking a baton in last place and breaking the tape. It exhausted him, but not so much so that he couldn't hit a three-pointer moments later.

In 22 minutes, Arthur totaled 21 points, six rebounds and six steals. Afterward, he talked about how much work he has in front of him.

"I was tired most of the time," Arthur said. "We have to work on some things, and conditioning is one of them."

KU coach Self echoed that opinion and gave his take on Arthur's defensive abilities.

Defending the Dallas native who answers to the nickname Slim Shady presents a problem for anyone.

As the team's conditioning improves, it's easy to see where Arthur, Wright and Jackson can account for the 80 post minutes, provided all three stay out of foul trouble.

Arthur didn't fib about his motivation for challenging so many passes and getting so many steals.

"Trying to get breakaways," Arthur said. "I try to go for every loose ball so I can take the ball, go up the court and get a few dunks like Julian got."

Plenty of time for that.

EEAASSYY folks. This was an exhibition game against Washburn. Arthur is a very gifted bball player but athleticism alone isn't going to produce results against Florida. Let's see how he handles himself mentally and physically on Nov. 25th. GO HAWKS!

You mean. EEAASSY Keegan. Keegan gets paid to hype anything not completely ordinary and mundane. At least it would appear that he does. Nobody is expecting Arthur to slaughter people right away. Simien had a huge exhibition game his freshmen year and it still took him a couple years to develope and earn his place as the team leader.

so we're the best team ever?