Here's a look at 50 of the most memorable sporting moments in Allen Fieldhouse's storied history, in no particular order, as chosen by the Journal-World staff:

4. Wilt Chamberlain returns Jan. 17, 1998, as part of KU's 100th anniversary of basketball. Wearing his old letter jacket, Chamberlain charms the fans with an emotional speech and stays two hours after the game to sign autographs. 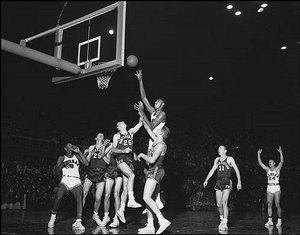 Wilt Chamberlain towers above the rest of the players in his file photo from his college debut. He had 52 points in the game, an 87-69 victory over Northwestern.

6. Fans are astounded during a game with Kansas State on Feb. 20, 1965, when a pair of 6x12 banners saying "Go Cats, Kill Snob Hill Again" unfurl on the east and west sides of the scoreboard with eight minutes left in the first half of KU's 88-66 victory. A wire stretching to the south end zone enabled visiting KSU fans to trip the banners.

9. Oklahoma players clip the nets Feb. 22, 1984, after spilling the Jayhawks, 92-82, in overtime and clinching the Big Eight championship. Afterward, peeved KU coach Larry Brown remarks, "What goes around comes around."

12. KU thumps Oklahoma State, 75-57, in the final home game for seniors Danny Manning, Chris Piper and Archie Marshall. OSU coach Leonard Hamilton agrees to allow Marshall, on crutches because of a knee injury, to limp onto the floor and take an uncontested shot with 1:33 remaining. Marshall missed.

13. Anthony Peeler scores 43 points, but KU tops Missouri, 98-89, March 8, 1992, and the Jayhawks cut down the nets after assuring a tie for the Big Eight Conference title. 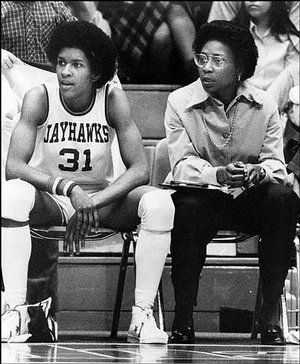 16. Nick Collison and Kirk Hinrich combine for 43 points March 1, 2003, in their last fieldhouse game -- an 89-61 victory over Oklahoma State. It also was Roy Williams' final game in Allen. A month later, he left for North Carolina.

19. Missouri pops Kansas, 76-49, Jan. 24, 2004, in Marian Washington's last game as KU women's coach. Three days later, Washington takes a medical leave of absence and a month after that announces her retirement after 31 years and 560 victories. 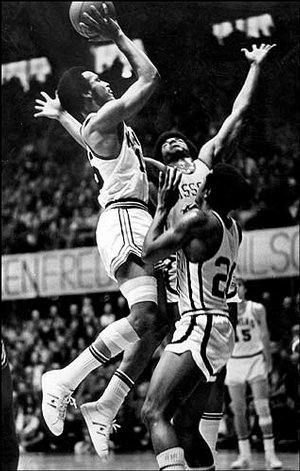 Bud Stallworth strikes for two of the 50 points he scored against Missouri in 1972.

20. KU spills Missouri, 80-70, to wrap up the 100-year anniversary weekend celebration Feb. 8, 1998. At halftime, hundreds of KU players and coaches walk onto the court for introductions.

22. A school-record nine Jayhawks score in double figures in a 127-82 victory over Iowa State on Jan. 7, 1989. That's also the most points KU has scored in a conference game.

Terry Brown, who drained a school-record 11 three-pointers in 1991, lets fly a shot.

29. Terry Brown scores 26 points, pacing KU to a 73-60 victory over Miami on Jan. 16, 1991, in a game that nearly was canceled because of the start of Operation Desert Storm in the Persian Gulf. Brown dedicates the game to a brother serving in the Gulf.

30. Several KU students unveil a banner made of shower curtains that reads, "Pay heed all who enter: Beware of the Phog," prior to a Feb. 22, 1988, game against Duke.

31. A renovation project during the summer of 1974 covers the fieldhouse's original dirt surface completely. A synthetic basketball floor is installed to replace the original portable raised floor. Five years later, another portable wood floor replaces the synthetic one. 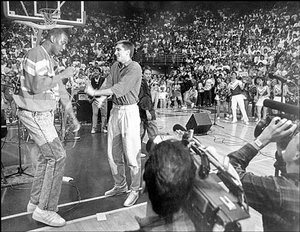 35. Alonzo Jamison shatters the backboard with a dunk during the 1988 Late Night. 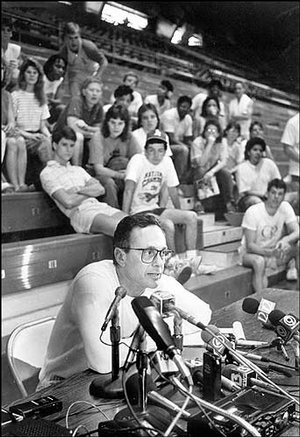 Larry Brown announces he's staying as coach at Kansas University, spurning an offer from UCLA. Less than a month later, he takes over as coach of the San Antonio Spurs.

39. KU downs Oklahoma State, 64-48, Feb. 3, 1969, for the 1,000th victory in school history. Coach Ted Owens had torn the seat of his trousers in the second half and had to wear a towel around his waist in a postgame ceremony.

41. Coach Roy Williams tries to start six seniors plus Raef LaFrentz before waving walk-ons Joel Branstrom and Steve Ransom off the Allen Fieldhouse court prior to tipoff of a 78-58 victory over Kansas State on Feb. 22, 1997. 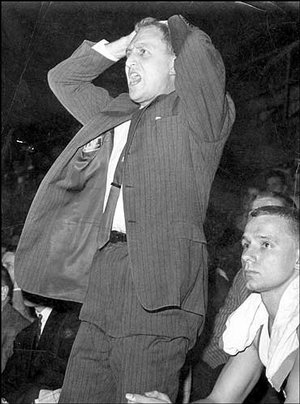 45. A sellout crowd watches Michael Jordan and the Chicago Bulls knock off the Seattle SuperSonics in an NBA exhibition game Oct. 11, 1997.

46. Coach Dick Harp goes on the PA system Feb. 23, 1958, to beseech KU fans to stop booing Missouri's Mike Kirksey on the free-throw line. Harp is ignored, and the KU coach asks the official to call a technical foul on the fans. Kirksey makes three free throws, but KU wins, 85-81.

50. Days after winning the 1988 NCAA title, coach Larry Brown holds an afternoon press conference in the fieldhouse to announce he has turned down a job offer from UCLA. Less than a month later, he bolts for the NBA's San Antonio Spurs.