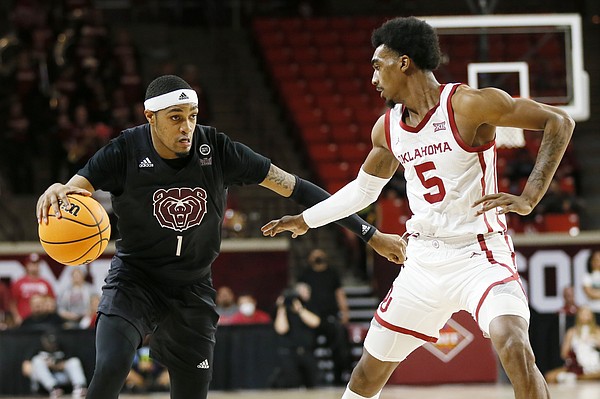 What started as a three-headed monster of potential Kansas transfer targets is now down to one.

Texas Tech’s Kevin McCullar Jr. is coming to Kansas if he pulls out of the draft. Former Iowa State point guard Tyrese Hunter is headed to Texas. And Missouri State guard Isiaih Mosley reportedly — per CBS college hoops analyst Jon Rothstein — has withdrawn his name from the draft pool and is planning to play in college next season.

That’s a fairly nice upgrade from the days of the Joe Cremo offseason dreams. Mosley is ranked as the third-best transfer portal prospect this offseason by 247 Sports.

While it’s been pretty quiet for the past couple of weeks, Mosley’s situation is worth watching. It appears that Mississippi State is heavily involved with Mosley, as well, but at least at some point there was mutual interest between him and Kansas. He has not visited KU, though, so it's hard to know exactly how interested he might be.

It’s possible that Mosley, who stands 6-foot-5 senior and was a two-time first team all-Missouri Valley Conference selection during his time at Missouri State, has been waiting to make a decision until after KU’s Jalen Wilson makes his. Of course, the timing there could be purely coincidental, too.

Remember, Wednesday’s deadline is only about withdrawing from the NBA draft pool in order to retain eligibility. Players in the transfer portal do not have to announce or decide where they’re heading next by then.

KU does not currently have a scholarship available and only would if Wilson — or someone else — were to leave.

If Wilson leaves, Bill Self’s squad will be looking to replace 91% of its scoring from last season’s national title team. Doing that with a guy who averaged 20 a game last year could make that a little easier.

Even if Wilson returns, KU still will be looking to replace 78% of its scoring from last season. At that point, they'll have to ride with who they have, though, because, again, there would be no scholarship available.

Those numbers, along with several other factors, make it clear that next year’s KU team is going to look dramatically different than the one that won the 2022 national title.

The question is, will Mosley be a part of that new-look roster? Because of his connections to the KU roster — most notably his close friendship with Dajuan Harris Jr. — a lot of people believe that Mosley to KU would be automatic if the Jayhawks have an opening. I'm not sure that's where this is at, though. It's also important to note how quickly these things can change and how different the situation is and appears to be when you're talking about KU having a hypothetical spot available and an actual spot available.

There would be other benefits to adding Mosley to the roster if Wilson were to leave. In addition to his 20.4-point scoring average, he also averaged 6.2 rebounds and 2.3 assists per game last season while shooting 50% from the floor, 40% from 3-point range and 90% from the free throw line.

Mosley played high school basketball with Harris at Rock Bridge in Columbia, Missouri, and was also a MoKan teammate of Harris and Christian Braun’s. We know Braun is gone, but giving Harris a buddy — and, really, they’re more like brothers — to run with again could be huge for his continued development.

According to Rivals.com, coaches from Kansas, Duke, Texas, Texas Tech, Oklahoma, Mississippi State, Louisville, Florida and others reached out to Mosley shortly after he entered the portal.

So it’s clear that Mosley has options.

Wilson has until 10:59 p.m. central on Wednesday to officially remove his name from the draft pool in order to retain his college eligibility.

It’s worth noting that the deadline is for Wilson to notify the NCAA not for him to announce it publicly. It seems likely that he will do just that — one way or the other — but if we don’t hear anything by 10:59 p.m. on Wednesday does not mean Wilson’s staying in or returning. As long as he followed the proper protocol and notified the correct people, the announcement part of it is kind of irrelevant.

It’s tough to keep all those little Missouri schools apart. Three different ones have produced transfers - Cam Martin, Ryan Hawkins, and Mosley. Hawkins had a successful transfer, and hoping for similar results for Cam. Mosley would seem like a nice addition if there’s room.

It would be fun to have the regional flair again on a national stage. A darn shame that other schools aren’t able to be regionally or nationally relevant. {sarcasm font off}

If I had my druthers, I would prefer that an experienced (within Self's system) and highly motivated Jalen Wilson return for his senior season and rely on the talent that Self has stockpiled. It is time that Self and his staff develop some of KU’s young players to replace 91% of the scoring from last year than rent a player for a year (all while realizing that Remy Martin was essential to win a national championship).

I wonder how Mosley pronounces his first name, "Isiaih".

It is interesting spelling "iai" versus "aia" for the famous prophet Isaiah.

It does sound like he is a very good basketball player.

Andy - Do you mean develop the players like they have with Ochai, CB, Jalen, David, Dajuan, Dok, Devonte, Svi, Frank, TRob, TT, …? It seems the time began long ago.

This seems to be the new twist on 1ndones, and also seems to me that Coach Self and crew have done a great job of balancing multi-year development with splashes of exceptional talent.

Even if Jalen leaves, and Kevin and Isiaih are both added, there will still be lots of opportunities for all the young players the staff has recruited and is developing.

I do agree with you that it’s nice to have players around for multiple years. My hope is that the new guys each year can blend in as well as Remy, JCL, and all the new guys did last year.